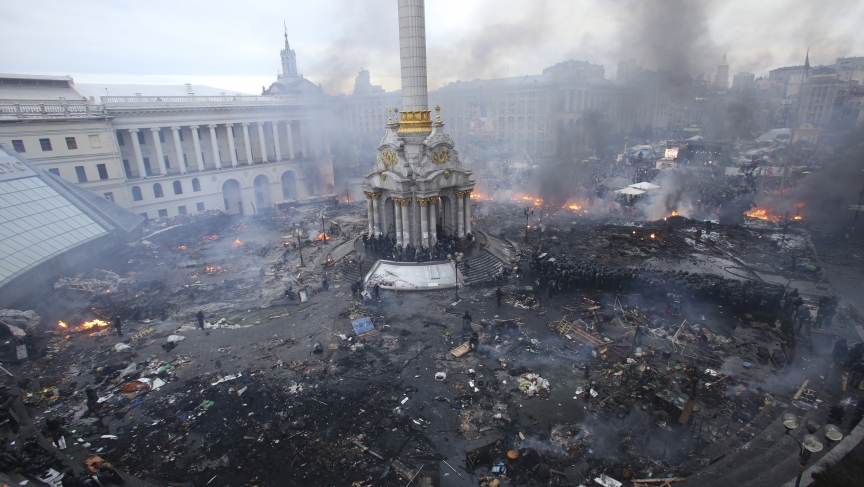 Russia is watching events in Ukraine very closely. And Ukrainians are wondering how far Russia will go to get the outcome it wants in the crisis.

"Mostly on Russian TV you're seeing reports that this is a band of radicals — right-wing fascist radicals who are trying to stage a violent coup," she adds. There is no suggestion this is a popular movement: instead Russian news suggests innocent civilians are trapped and being used as "hostages," says Ioffe. "The only casualties we hear about are the cops and special forces officers."

Ukraine broke away from the Soviet Union at the end of the Cold War, after centuries under Moscow's domination. Even today, a large minority of Ukrainian citizens are ethnically Russian. But Moscow's interests in Ukraine are mostly geopolitical and economic, says Ioffe. Moscow doesn't want to see "NATO and the European Union expand to Russia's doorstep."

"Very famously," Ioffe says, "Vladimir Putin is said to have said to George W. Bush back in 2008 that Ukraine is not a real country. He sees Ukraine very much as an extension of Russia. Basically a province of Russia that through an accident of history has its own borders, its own government and its own foreign policy."

Ioffe says some in Russia even call Ukraine 'Little Russia' or 'Minor Russia.'

Putin is sending billions of dollars in aid to prop up Yanukovych, and he could also provide equipment, training and "reinforcements," if need-be.

Many Ukrainian protesters fear Russia could intervene more directly. "There are constant allusions to this" in Russian media, says Ioffe. Russians she says "keep waiting for the news to flash across the wires" that Russian troops have intervened in Ukraine. But Ioffe says Moscow probably does not want to do this. "But as we've seen in Georgia, when it comes to Russia's 'near-abroad' and its backyard, it's not loathe to put its money where its mouth is, or its soldiers where its mouth is."