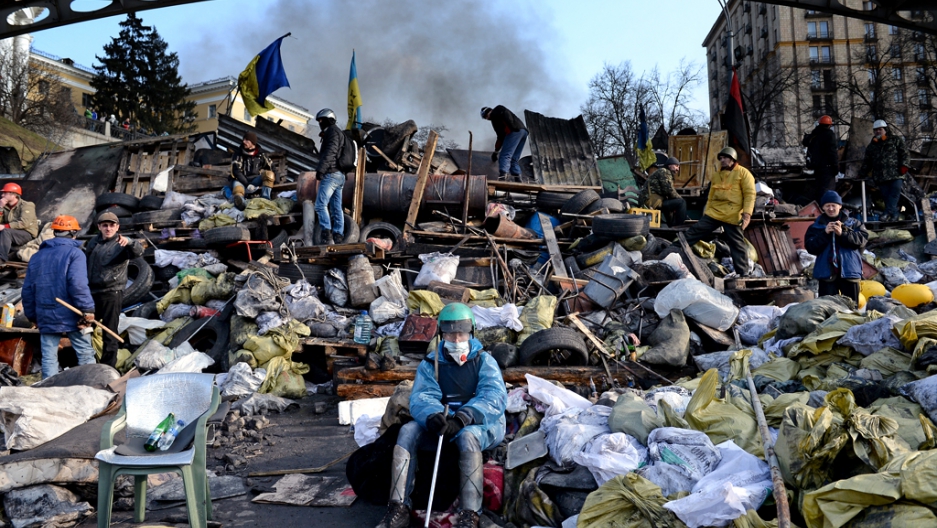 MOSCOW, Russia — Russian officials likely are watching with consternation as the country they’re hoping to pull further into their orbit teeters on the brink of uncontrollable chaos.

The death toll from violence in Ukraine’s capital this week surged past at least 67 on Thursday, the bloodiest day to date in the monthslong political crisis.

But observers say that was a payoff for snubbing Europe that came with expectations the Ukrainian leader would restore order in his besieged capital.

Now, amid the rapid escalation of unprecedented violence and the very real prospect of civil war, the Kremlin appears stuck with a man who’s losing control.

It begs the question: What will Russia do next?

“If this escalation continues, nobody knows where it’s going to stop,” said Arkady Moshes, of the Finnish Institute of International Affairs. “You can think of dozens of things which Russia would really not be interested in seeing.”

As fierce urban fighting continued in central Kyiv Thursday, Prime Minister Dmitry Medvedev said in an unusually strong statement that Russia would continue its strategic cooperation with Ukraine so long as the authorities remain “legitimate and effective.”

But he also appeared to warn the Yanukovych administration against being a “doormat” on which people “wipe their feet,” Russian news agencies reported.

That’s likely a reflection of the growing frustration among top Russian officials who’d earlier relied on Yanukovych to rein in the protesters both he and the Kremlin have long cast as “terrorists” and violent “extremists.”

Also undoubtedly troubling for the Kremlin is seeing Yanukovych's authority — both in Kyiv and nationwide — slipping quickly.

Local media reports have widely documented the capture of police conscripts by protesters and, in some cases, their open surrender.

A major shock to the regime came when Kyiv's top official, Volodymyr Makeyenko, announced in an address to the president on Thursday that he was leaving the ruling Party of Regions and shifting his loyalty to the people on the streets.

That news followed reports detailing the defection of other party members around the country.

Denis Denisov, the head of a Kremlin-funded think-tank in Kyiv, admits that Yanukovych’s fumbling of the protests has helped nudge Moscow into an uncomfortable situation — one with few immediate options.

“He has annoyed many people in Ukraine, and even in Russia not many are particularly eager to deal with him,” he said. “But on the other hand everyone understands that there’s no other alternative at the moment.”

Denisov added that Russia is most interested in a “stable, developing [Ukraine].”

That’s why Russian officials have continued hammering away at Ukrainian opposition leaders and the radical fighters they say provoked the violence.

More ominous, however, were comments on Wednesday by Leonid Slutsky, head of Russia’s parliamentary committee for CIS (Commonwealth of Independent States) affairs, who promoted the idea of Russian assistance in order to prevent a “Yugoslav scenario.”

“Russia and deputies of the State Duma are prepared to give all the necessary assistance should the fraternal Ukrainian people ask for it,” he said, Russian news agency ITAR-TASS reported.

Such talk of Russian “assistance” is likely to only inflame the fury on the Maidan, the nerve center of the three-month-long demonstrations in Kyiv, which in recent days has appeared to be aimed at Moscow just as much as at the Yanukovych regime.

On Thursday, local media reported speakers onstage displaying a patch from a Russian Ministry of Interior uniform they said was found in the area amid the violent clashes.

While far-fetched — for now — and virtually impossible to verify, it demonstrates the growing apprehension among protesters that Moscow is prepared to step up its efforts to keep Ukraine nestled in its sphere of influence.

Any confirmed evidence of Russian support in that vein would almost certainly result in the escalation of violence.

But fears have also stirred over the country’s staunchly pro-Russian regions, particularly the Autonomous Republic of Crimea in the south. Officials there have remained defiant in recent days and strongly condemned the protests in Kyiv.

Volodymyr Konstantinov, the Crimean parliament speaker, even suggested his region might break away if the country began to fall apart.

“Everything is headed in that direction,” he told the Interfax news agency on Thursday.

Observers have long pegged Crimea — home to Russia’s storied Black Sea Fleet — as a base of simmering pro-Russian separatism.

Some critics, such as Andrei Illarionov, a former Putin adviser, suggest that if Yanukovych is successfully toppled, a scenario similar to Russia’s invasion of Georgia’s breakaway republic of South Ossetia in 2008 — under the pretext of protecting locals against alleged Georgian aggression — is not impossible.

“Of course, before that we would see organized ‘incidents against Russians’ so there would be a pretext, and so that the international community would have no doubts about the legality of such a move,” he wrote on his blog last month.

Meanwhile, other experts say Russia, which has taken heavy flack from Western critics who accuse it of enabling the Yanukovych regime, still has a chance to save face and force a peaceful solution.

One option, says Moshes, is to treat the crisis as an “opportunity to do something together with the West.”

“It would require Russia to invest its influence — and probably more money — but it could be done in a negotiated way so that it would actually be a win-win for Russian-Western relations,” he says, adding that Yanukovych’s full ouster would have to be part of the discussion.

But given recent rhetoric from Moscow, that prospect looks unlikely.

Russia’s Foreign Ministry on Thursday slammed Western threats of targeted sanctions on Ukrainian officials as moves that would only “exacerbate” the situation, according to state news agency RIA Novosti.

Nevertheless, Russian agencies reported late Thursday that after a request by Yanukovych, the Kremlin is sending its human rights ombudsman, Vladimir Lukin, to Kyiv as a mediator in crisis talks.

But the other option, which Moshes says Moscow is currently pursuing, is to “conduct a divided policy in a divided country.”

That means inflaming tensions between anti-Yanukovych demonstrators and pro-Russian citizens by continuing to paint the protesters solely as radicals bent on staging a violent coup.

That strategy also plays to Russia’s advantage on the home front, where the Kremlin has successfully fended off its own mass opposition movement against President Vladimir Putin and is undoubtedly interested in preventing it from bubbling up again.

“You get chaos, you get blood, you get death — and in that sense the Russian propaganda people can make their own story out of it,” Moshes said.