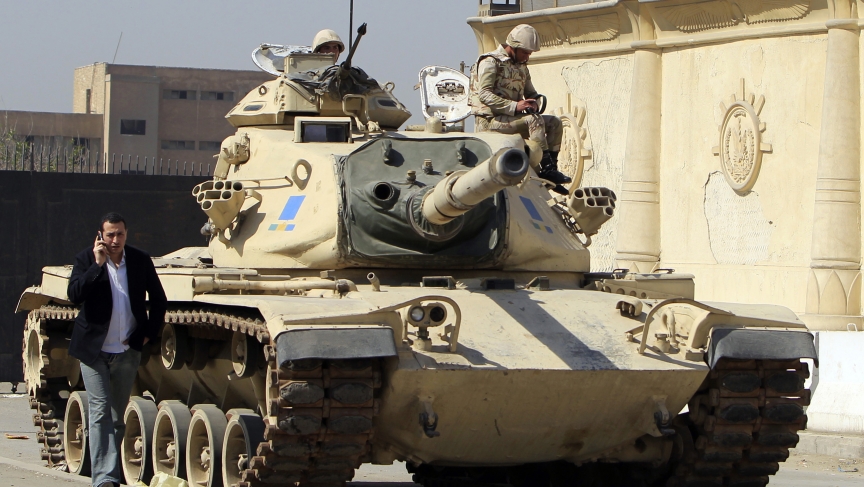 A journalist walks past Egyptian army soldiers on a tank positioned outside Cairo's Tora prison, where the trial of Al-Jazeera journalists and other foreign media began on February 20, 2014.

On Thursday, three jailed Al-Jazeera English journalists stood in front of an Egyptian judge for their court hearing. They were arrested more than 50 days ago for a laundry list of allegations.

Ruth Pollard, a journalist for the Sydney Morning Herald, was present at the trial, which she said "was pretty extraordinary."

The journalists — Peter Greste, Mohamed Fahmy and Baher Mohammed — and five other co-defendants were "dressed in white prison jumpsuits ... [and] held in these enormous black cages off to the side of the courtroom," said Pollard.

Greste, who is Australian, and Fahmy, who holds a Canadian passport, reached out to their respective governments "to speak out about their plight."

The allegations against the journalists, Pollard said, range from "fabricating false news, to manipulating footage in order to deliberately tarnish Egypt's reputation internationally."

"They have simply been going about their job as any journalist would, interviewing people from both sides of the story," Pollard said. "That includes people from the Muslim Brotherhood as well as the interim-backed government, as well as other political parties and opposition voices in Egypt at the moment."

Mounting international pressure from journalists, media organizations and human rights groups has, in fact, led to better conditions for the journalists. The Al-Jazeera network even launched a social media campaign to raise awareness about the jailed journalists, using the hashtag #FreeAJStaff.

Greste, Fahmy and Mohammed have taken note of that publicity, Pollard said. During a break at the trial, they shouted messages of thanks for what Pollard described as an "international campaign of support."

Prior to the international attention, Fahmy and Mohammed were jailed at a high-security prison complex known as Scorpion, which is reserved for those with high-level terrorism charges.

They have since been transferred to the same prison as Greste, a lower-level complex called Tora. "They've been confined to their prison cells for 23 hours a day," Pollard said. "They don't get to see sunlight."

Following today's trial hearing, the judge refused to grant the journalists bail. The trial was postponed until March 5.

At this point, the journalists say they would like access to the specific case filed against them.

"They've received no evidence presented that they manipulated footage or tarnished Egypt's reputation in any way by doing the balanced and fair reporting job that they had done in Egypt, covering what is a very tense and complex political situation here," Pollard said.