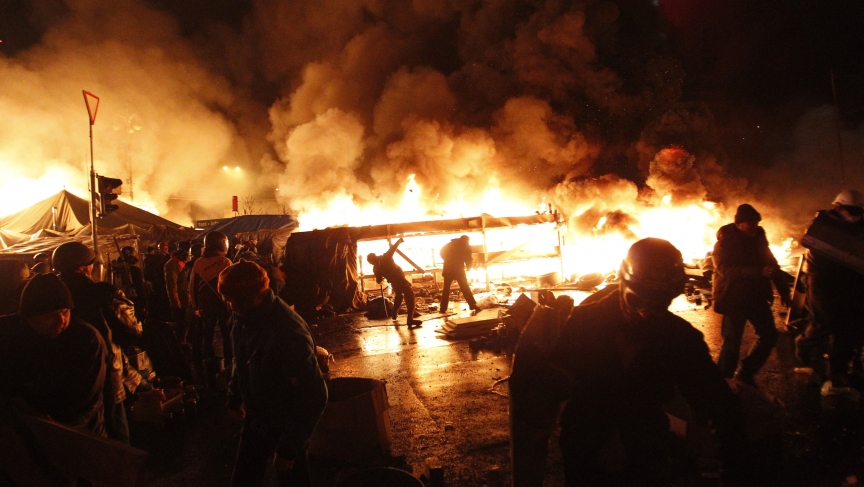 Anti-government protesters throw missiles during clashes with riot police at the Independence Square in Kiev, Wednesday.

The struggle for the soul of Ukraine has taken an ominous turn. The government denounced street violence as an "attempted coup," sparking fears of a more violent crackdown on protesters.

The three-month occupation of a square in downtown Kiev turned violent on Tuesday night. At least 25 people have died and hundreds are injured. Makeshift hospitals were set up in churches.

Clashes continued Wednesday. The BBC's David Stern says, on the streets, "you get all types. Old and young. Professionals and workers. It's a real array." He saw protesters throwing molotov cocktails and bricks at police, while police responded with stun guns and rubber bullets.

The protesters are demanding a revolution in the way the country is run. Not only do they want to get rid of President Viktor Yanukovych, they want an overhaul of government and an end to corruption. They also oppose Yanukovych's orientation toward Russia and seek closer ties with the European Union.

But the government is not budging. After making some conciliatory noises over the last few months, it has not delivered any promised concessions. On Wednesday, the government declared it had launched a nationwide "anti-terrorism operation."  It claims protesters have looted arms dumps, but presented no evidence of that.

President Yanukovych recently fired the head of the army. A government official said an army paratroop brigade was coming to Kiev to protect military installations, though it's not clear if the soldiers will be used against demonstrators.

According to polls, the country is evenly split between those who support the protests and those who oppose them. But Stern faulted the Russian media for portraying the conflict as something close to civil war. "That's an incorrect characterization," he says.

Many protesters are afraid Russia might decide to intervene in the conflict directly.