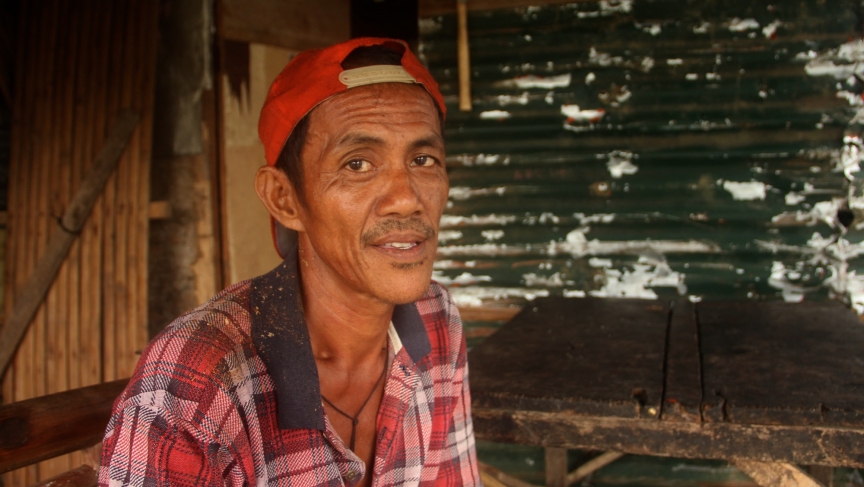 Farmer Felipe Parado Jr., 59, has collected the sap of coconut palms, to make wine, since he was a child.

In the Philippines, the coconut palm is called the tree of life. This country is the world’s largest producer of coconuts. People here use every part of the tree — to make brooms, soap, fishing nets, charcoal, paper and lots of traditional foods.

When Typhoon Haiyan struck the country last November, it took down 33 million coconut trees. About 160 of them belonged to farmer Felipe Parado, Jr.

Parado, 59, is a wiry man who has been scampering up the skinny trunks of coconut trees since he was 5. He specializes in making tuba — the local coconut wine.

"Climb the tree, all the way to the top,” he says, decribing how it is made. “Make a small slice at the base of the frond, and let the sap drip into a plastic bottle. Keep it pure, don't let any rainwater in.”

This was Parado's job for nearly 50 years, until the day Typhoon Haiyan ripped through his village. In the municipality of Palo, where Parado lives, all of the coconut farms have been wiped out. Even the trees left standing are so severely damaged they'll never bear fruit again.

“We have nothing to sell, nothing to make into wine, no trees,” he says. “That's just how it is."

So Parado is doing the only thing there is left to do — he is having his downed trees cut into lumber.

For each tree he sells to the sawmill, he gets about $3. So far, the sawmill's trucks have come around to pick up ten of his trees. He will sell whatever he doesn't use to rebuild his house, but the earnings are a paltry sum compared to what the trees earned him before. And after the trees are gone, he is not sure what he'll do for income.

For now, Parado and his family are living off of two sacks of rice given to them by a relief agency. He says they can stretch that out for a few months. After that, maybe he will walk into town, ask around, and see if anyone needs some carpentry or other work done.

His long-term goal is to get back to coconut farming.

"I've already started planting,” he says. “I've got a few trees going here and there.”

But it will take at least six years before Parado's new trees bear fruit. "If I'm still alive then, I'll be able to afford to live again,” he says. “One day."