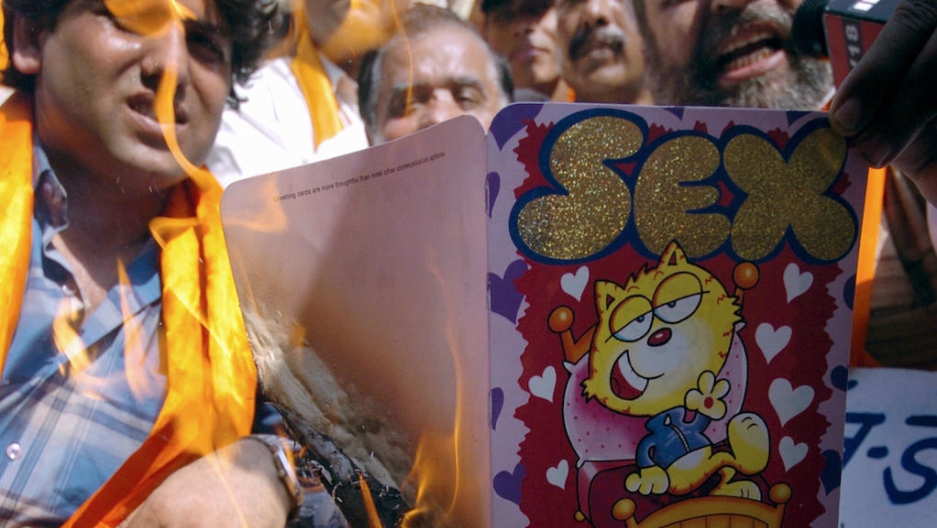 NEW DELHI, India — Change is in the air here in the world’s largest democracy.

Investors overwhelmingly support him. Even the Obama administration seems convinced, reaching out to a man long banned from the US over anti-Muslim riots in which 1,000 people died more than a decade ago.

Modi is reputed to offer something that India desperately needs: strong economic leadership (although some dispute this). He has carefully cultivated the persona of a moderate, reliable helmsman for India, Inc.

But accepting Modi also means empowering his supporters. And they have their own agendas — like banning books, films, and even Valentine’s Day.

He wasn’t talking about cuisine.

Saffron is the color of the Sangh Parivar, an ultra-conservative Hindu movement that centers on Modi’s Bharatiya Janata Party (BJP).

The saffron wave prediction came from Subramanian Swamy, a senior BJP politician who would expect a portion of power in a Modi government.

Swamy showed unabashed glee at news that American academic Wendy Doniger’s 800-page tome "The Hindus: An Alternative History" was to be pulped. He asked, “Why allow foreign junk?”

The University of Chicago professor’s publisher, Penguin Books India, capitulated after a four-year legal battle with a Hindu pressure group led by Dinanath Batra, an 84-year-old education campaigner, who claimed the book is offensive to Hindus.

Liberal Indians have blasted Penguin for failing to stand up for free speech, while Professor Doniger blamed colonial-era laws on blasphemy.

While the the lawsuit against Doniger’s book attracted international attention, it is just one facet of Swamy’s saffron wave.

A screening of a film about rape and human rights violations in Kashmir, "Ocean of Tears," was disrupted by “BJP activists” last week, local media said.

A similar group managed to prevent a reading of banned books at the Delhi Book Fair the next day.

And on Valentine’s Day, activists from a similar group confronted unmarried couples sitting on benches at a park.

Online, so-called “Internet Hindus” track mentions of Modi and other topics of interest to the Sangh Parivar, whose central aim is to define India as a Hindu nation and resist what they see as creeping westernization.

Senior sources at NDTV, one of India’s leading TV news networks, told GlobalPost on condition of anonymity that there is a chilling effect on their coverage.

“There is no memo that goes out. It’s much more subtle,” the source said. “There’s a cautious approach to dealing with extreme views, whether that’s the Taliban in Pakistan, Kashmir, or the Hindu right. I hate the idea that we self-censor. But it’s hard to argue against it.”

The “cautious approach” stems from a combination of questions editors ask themselves, the source said.

“Is it because it might offend someone, or this might bring the war to my doorstep, or is it politically expedient not to do this? It’s a mixture of all three of these things.”

Sangarika Ghose, an anchor at the CNN-IBN news channel who coined the term "internet Hindus," says she has been targeted online with rape and death threats.

“There is an evil out there, an evil which is stamping out all free speech and silencing independent journalists,” she said on Twitter.

Some claim that pressure is also being brought to bear on media owners, with allegations that senior editors have been fired or sidelined for not being supportive of Modi.

Journalist Manu Joseph declined to discuss his own departure as the editor of Open magazine, after its political editor Hartosh Singh Bal was sacked and replaced by a journalist said to be more sympathetic to Modi.

But he said attacks on the media, artists and authors were not confined to the Sangh Parivar.

“This is not just a Hindu fundamentalist thing,” he said. “Hindus, Muslims, Christians and Jains have all claimed that their sentiments have been hurt.”

Salman Rushdie’s notorious "The Satanic Verses" remains banned in India, and the author was prevented from attending the Jaipur Literature Festival in 2012 after protests by Muslim groups. Several other books relating to Islam and Hinduism have been banned under the Congress-led government since it took power from the BJP in 2004.

Even Dan Brown’s "The Da Vinci Code" was banned in the northeastern state of Nagaland after accusations of blasphemy. And a journalist at the Times of India was arrested after Muslims complained about a story that said a Bollywood actress had a dog named Mustafa — one of the Prophet Mohammed’s names.

Still, it seems likely that parts of the Sangh Parivar movement will resume a campaign to rewrite India’s history books. Under the previous BJP government, in power from 1998 to 2004, history textbooks used in schools were replaced with “saffronized” books that depicted medieval India as “a paradise laid waste by barbarous Muslim invaders,” according to an essay by best-selling historian William Dalrymple.

One of the people at the heart of this textbook campaign was Dinanath Batra — the same man whose lawsuit led to Wendy Doniger’s books being destroyed last week. He says he will target more books in the future.

“The good times are coming,” he told Mint, “believe me.”

And not just for Batra.