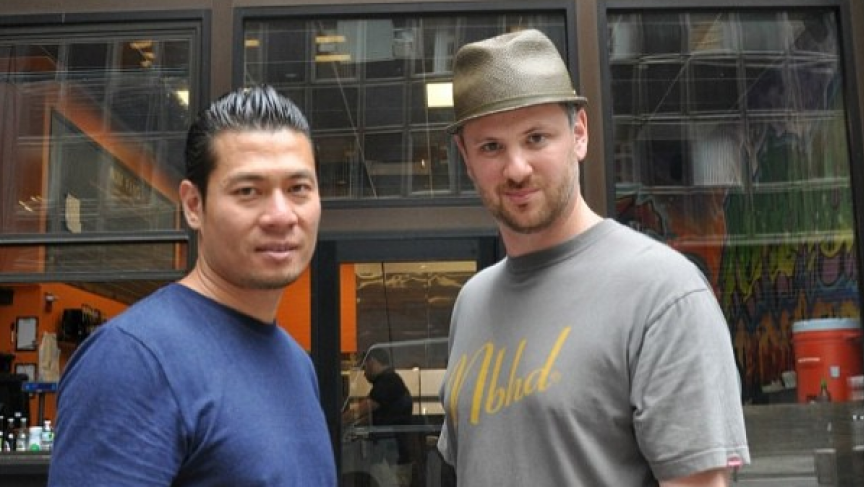 Ratha Chaupoly is the co-owner of Num Pang in New York. It's a noisy joint, serving Cambodian sandwiches, spicy rice bowls and more. Too noisy to chat, though.

So Chaupoly, who was born in Cambodia, leads me back through the kitchen and down into a warren of corridors and prep spaces underneath the city. The tiny storefront has a cavernous subterranean lair — it's astonishing down there, and a neat illustration of what goes into making even a single sandwich. You need a space. You need staff. You need ingredients. And suppliers. And heating and hot water. And this. And that.

Operating a restaurant is complicated.

Chaupoly arrived in the US with his mom. He was seven — and he grew up an American kid. So much so that, when he finished college, the next question was a perennial one: now what?

The answer was: move to Maine to sell sea urchin. He was 24.

It wasn't as random as it sounds. Chaupoly's brother had identified the business opportunity and invited his younger sibling to join him on the ride.

Back then, in the early '90s, sea urchin wasn't seen that way in Maine. It was considered a pest. Something to be thrown out or sold for pennies. Japan had begun to deplete the stock of sea urchin in its own waters. Maine's sea urchin supply was plentiful. And that was the opportunity.

The Chaupoly brothers got working in the trade, buying sea urchin from local divers and selling it to local processors or to buyers from Japan. But the business was already changing: everyone was getting wise, raising prices or doing other things to make a buck from the sea urchin.

That meant Ratha Chaupoly had to get wise, too, and fast.

He learned to assess the quality of the seafood, also known as uni. It is judged by the color and density of the roe. And he figured out how to deal with local divers, some of whom were, let's just say, a little shady.

One trick Chaupoly grew to recognize: divers filling bags with sub-par sea urchin, and topping them off with a few good ones. Inexperienced buyers could be fooled into paying too much, only to receive a low price in return when the true quality of the batch was discovered. It was a game you had to learn very quickly, Chaupoly says, "or else you [lost] your shirt."

Fast-forward to today: Chaupoly doesn't serve sea urchin at Nam Pang (although he does love the taste), but he traces his business success back to those early days in Maine.

He learned "the importance of trust", he says. And of keeping your eyes on everything.