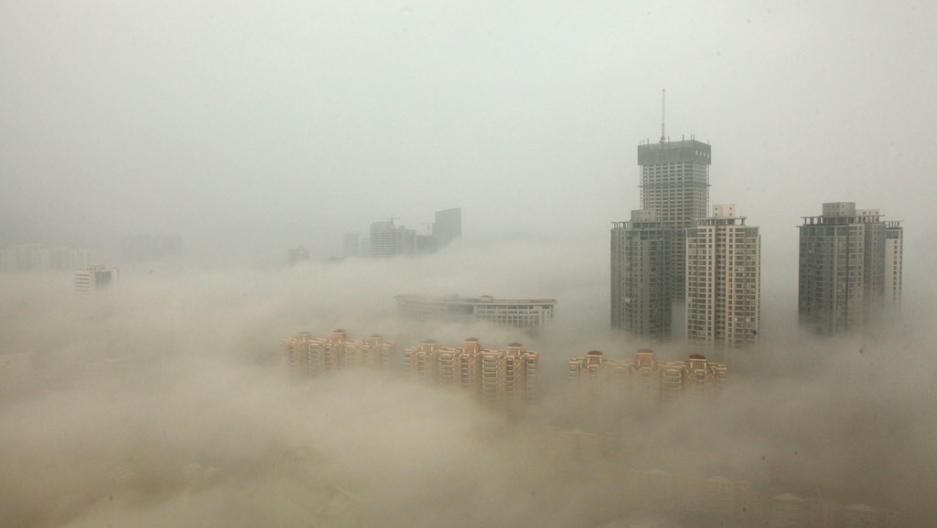 Buildings in Lianyungang, China are shrouded in smog on December 8, 2013. The heavy smog forced school closures. China's reputation as a clean energy leader is in doubt as it rapidly expands coal power.
Credit: ChinaPhotoPress
Share

HONG KONG — Despite the pictures of Beijing wreathed in soupy smog, China still enjoys the reputation of a country committed to leading the world into a clean-energy future.

Recall New York Times columnist Thomas Friedman’s 2010 pronouncement that “when historians look back at the end of the first decade of the 21st century, they will say that the most important thing to happen was not the Great Recession, but China’s Green Leap Forward.”

Reading this, it would be reasonable to assume that China must be cleaning America’s clock when it comes to using renewables.

Yet that’s not the case.

Here’s the real picture, thanks to a recent report by the US Energy Information Administration. The chart breaks out China’s energy use by source:

The vast majority of China’s actual energy supply comes not from “clean” sources like wind, solar, or hydro power, but from the dirtiest of fossil fuels, coal — which contributes disproportionately to climate change, smog, lung disease and premature death.

Now here is the same chart for the US. While the energy mix is far from ideal, its relatively limited use of coal almost looks good by comparison.

What explains the perception gap?

On the one hand, China has indeed spent vast sums of money on its solar, wind, and hydropower industries. In 2012 the People’s Republic unseated the United States to become the world’s top investor in green energy, investing $65 billion to the US’s $36 billion.

On the other hand, China has simultaneously embarked on an even bigger expansion of coal power. For every gigawatt of new solar capacity added in China in 2013, according to an analysis by Armond Cohen of the Breakthrough Institute, 27 gigawatts of new coal capacity were added.

The reliance on coal power is only going to continue.

In the five years ending in 2015, Beijing plans to ramp up coal production by an additional 860 million metric tons. That’s nearly one and a half times India’s entire annual output.

In other words, while China is making commendable progress in clean energy, it is striding much faster and farther toward burning ever-larger quantities of coal.

At the same time, China’s heavily subsidized solar industry is still on shaky footing after solar panel prices crashed 60 percent two years ago due to overproduction. Profits were also hit when exports to Europe and the US, their primary markets, were hit by tariffs.

As a result of these pressures, in 2013, China-based Suntech — once the biggest panel manufacturer in the world — defaulted on a $541-million bond payment. The firm is now in the process of liquidation.

Instead of cutting the subsidies, which have helped China’s solar and wind industries drive many American, European, and Japanese competitors into bankruptcy, the government has moved to try to soak up excess production with new projects.

In July, Beijing set a stunning goal of installing a cumulative 35 gigawatts of solar power by 2015, more than quadrupling current capacity. This push is expected to make China one of the two biggest solar markets this year along with Japan, which is seeking replacements for nuclear power after the Fukushima disaster. Japan and China alone are predicted to account for 40 to 45 percent of global demand in 2014.

While the 35 gigawatt goal is laudable, it still won’t make a dent in China’s reliance on King Coal. In 2013 alone, China installed nearly 40 gigawatts of new coal power capacity.