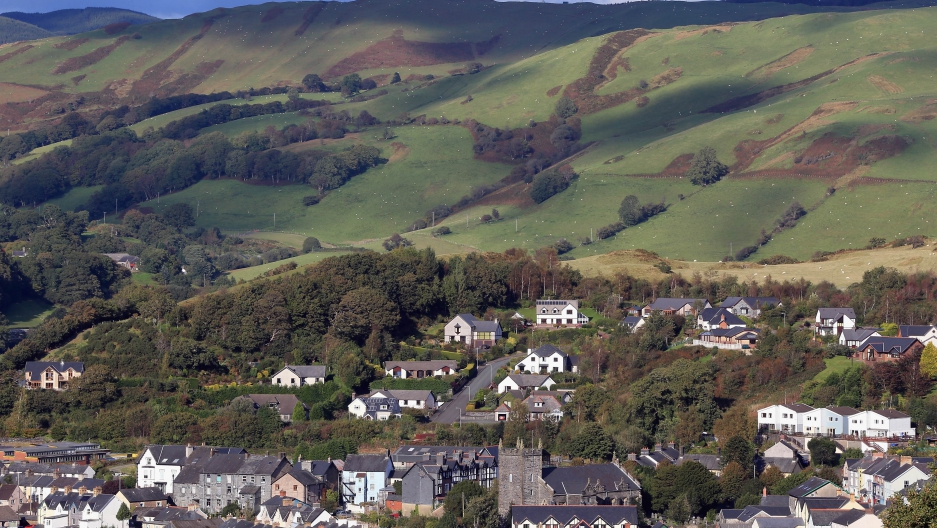 Business and conversations between friends here are conducted not in English but in Welsh, the language spoken by some 80 percent of the local population. For the past 40 years, the town has been a stronghold of Plaid Cymru, the nationalist party whose stated goal is eventual independence.

Ask what Wales’s future should be, and you’ll get more answers than there are consonants in "Llanfairpwllgwyngyll," the nearby village that boasts the longest place-name in Europe.

But even here, in the heart of Welsh nationalism, the same conclusion echoes time and again like a ballad’s refrain: The time for Welsh independence hasn’t come. Not yet.

In less than eight months, voters in Scotland will head to the polls to determine whether the country should secede from the United Kingdom. The vote is being watched with great interest in Wales, which has taken a markedly different path toward self-governance since 1997, when both countries were granted greater autonomy from London.

Scottish nationalism has since become a seemingly unstoppable political force. Wales, in contrast, has approached self-governance with a caution that has sometimes looked like apathy.

A 2011 vote to give the National Assembly greater lawmaking powers barely passed. Support for the nationalist, pro-independence Plaid Cymru (pronounced “Plied Camry”) has waned. The party trails the Welsh Labour and Conservative parties in the assembly.

The Welsh leader, First Minister Carwyn Jones, has officially come out against Scottish independence, arguing that both Scotland and the UK are stronger as a team.

Should the Scottish referendum pass, Jones has warned, his Labour government will attempt to block the currency union the Scottish National Party will seek with the “rump UK” — the unpoetic moniker pundits have given Britain-sans-Scotland.

Jones’s opposition to Scottish independence is not a universally shared sentiment. Those of a nationalist bent in Wales say they’re watching the events in Scotland with admiration — or at least great curiosity.

They see an opportunity for Wales. Whether or not the referendum passes, it will inevitably result in major discussions between the devolved governments and Westminster over how power and resources are shared across the British Isles.

The ensuing political shakeup could become a turning point for a country that British politics often treats like an afterthought.

It could also be the wake-up call nationalists have been waiting for to “fire up the people of Wales,” says Emrys Jones, a Caernarfon historian. The Scottish referendum “could be the trigger for something else, in that we can say, ‘Oy! If they’re getting it, we can get it.’”

England and Wales have enjoyed a largely peaceful union since the former annexed Wales in the 16th century. The two countries share a legal system, as well as a long and porous border that’s seen centuries of migration in both directions.

Despite 500 years of Westminster’s calling the shots politically and economically, Wales maintains a distinct sense of, well, Welshness. Besides having its own language, it fields its own sports teams.

Some here say that cultural sovereignty is enough.

“Their Welshness will always be there. Political independence is simply politicians playing their games.”

Public support for independence is minimal in Wales, consistently hovering around 10 to 15 percent in opinion polls.

The primary roadblock to a fully autonomous Wales, both supporters and critics of independence say, is the economy.

With 8.3 percent of the British population and 9.2 percent of GDP, Scotland is wealthy. Wales is not. The country consistently expends more public funds than it raises in taxes, a deficit made up by the central UK government.

Once-powerful slate and coal industries have been replaced by a service-centered economy. Wales has no equivalent to Scotland’s lucrative North Sea oil reserves.

“We don’t have that huge bargaining chip to say to the UK government, ‘We can afford to be independent.’ We don’t have the economic resources to support ourselves if we were an independent state,” says Rebecca Rumbul, manager of the Welsh Governance Centre, a think tank in the capital Cardiff.

“There’s a significant economic risk that would come with a real push for Welsh independence,” she says. “We’d actually have to pay for ourselves.”

But some see Wales’s failure to thrive economically as evidence that Cardiff should take the wheel from Westminster.

“Independence would be — to our politicians, economy and national self-respect — the equivalent of strapping on a pair of hobnail boots and giving us all a kick up the backside,” said Owen Donovan, a Welsh political blogger.

“The decline of the Welsh economy has been overseen by successive UK governments who have done little to boost the Welsh economy, instead using higher social welfare spending to compensate.”

The post-referendum shakeup could be a “golden opportunity” for Wales to argue for additional resources and powers, says Jessica Blair, a policy analyst at the Institute of Welsh Affairs.

Plaid Cymru leader Leanne Wood has said that her party will call for a constitutional convention to be held after the Sept. 18 vote in Scotland. The referendum’s results could compel mainstream nationalists to seek greater autonomy, even if full independence isn’t on the agenda.

Those who want to see Wales stand on its own feet some day say too many such opportunities have already been allowed to slip away.

“If we’d had our own parliament during the Industrial Revolution, we would be one of the richest countries in the world,” says Eirian James, owner of the Palas Print bookstore in Caernarfon. “It could have been so much different if Wales had been allowed to form our own destiny.”

“The frustration of being part of the great British union — so called — is that we’re not allowed to make some of those decisions for ourselves,” she adds. “Let us make our own mistakes.”