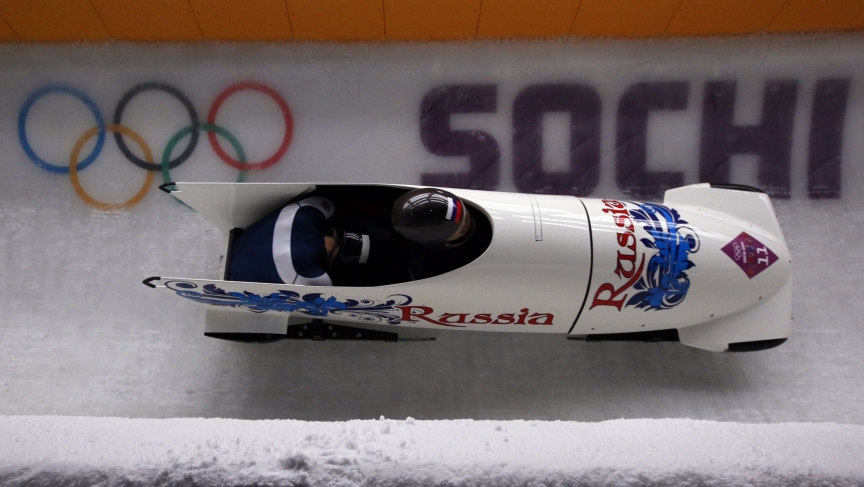 Russia's pilot Olga Stulneva and Liudmila Udobkina speed down the track during the women's bobsleigh competition at the 2014 Sochi Winter Olympics February 18, 2014.

Remember all those stories we heard before the Olympic games? You know, about the unfinished hotels coupled with security threats and the possible catastrophe that would be Vladimir Putin's legacy?

I've almost forgotten those stories. I was too focused on the twizzles of Meryl Davis and Charlie White.

Those two dancing on ice are the most impressive thing I’ve seen so far at the games. Sorry, BMW bobsled.

And as reporter Yekaterina Kravtsova tells it, my view of the games is similar to the views of those visiting Sochi to experience it in person. Kravtsova has been covering the spectacle in Sochi for the Moscow Times. She says everything has worked out fine. But she sees two different attitudes in the city.

There are the visitors and athletes who can’t get enough of the Olympic games. And then there are the residents who can’t wait for the games to end and life to return to normal.

Kravtsova recently captured the view of visitors, including some Olympians from Russia, who are basking in their victories:

The Caucasus is known for its exuberant celebrations, with guests drinking wine from a bride's shoe at weddings or from a drinking-horn during other festivities.

The Olympics are no exception, and while Russian athletes are clearly trying to meet President Vladimir Putin's expectations, they have also gone out of their way to celebrate their victories properly.

That was evident at a closed party in the Bosco House in central Sochi, where Russian athletes who had just become Olympic champions had to take their medals off and dip them in a large bowl of champagne that they would then drink from.

But she says it’s not a party for everyone. In the run-up to the games, she profiled Sergei Ivanovich, a botanist, who watched his hometown change:

For him, the most worrying aspect of the Olympic Games is not security or corruption, as it is for many of the Games' biggest critics. For him, the worst part of the Olympic construction is the changes [—] he said it wreaked havoc on the natural landscape.

"What concerns me most about the Olympics is that all the facilities have been built in an area where very rare plants and flowers used to grow," he said. Hundreds of birds used to come to this area for the winter, he said, and most of them were on the rare species list.

Kravtsova says that many residents are waiting and hoping the government will finish the various construction projects started before the games began, even if they, like Ivanovich, are unhappy about how such projects have already impacted their way of life.

And since there are only a couple of days left in the games, residents will soon find out.