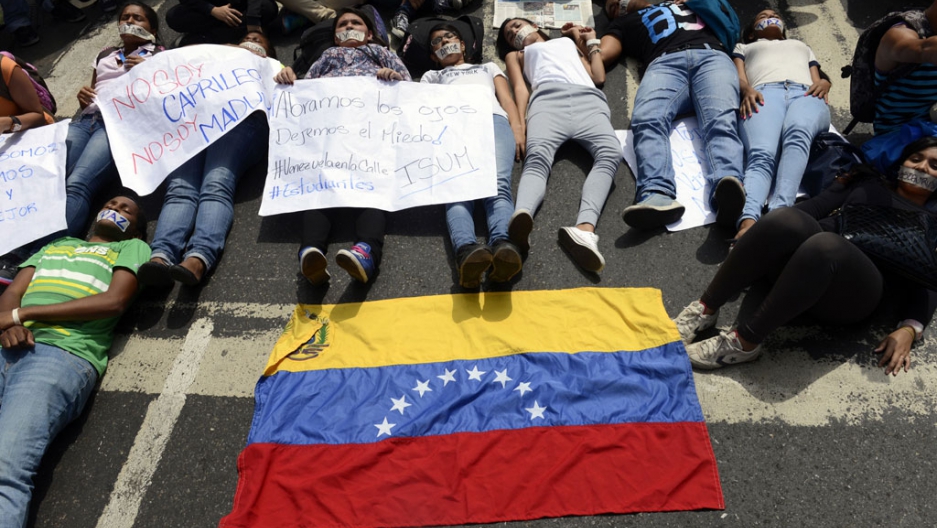 Students lie on the ground in protest for the student killed during the demonstration on the eve against the government of Venezuelan President Nicolas Maduro, in Caracas on Feb. 13, 2014.
Credit: LEO RAMIREZ
Share

In Venezuela, the revolution will not be televised — by Colombia's NTN24.

Protests against President Nicolas Maduro's government have been roiling the country this week, leading to violent confrontations that have killed four people.

Meanwhile, dueling broadcasts inside and outside Venezuela are portraying vastly different situations: Inside Venezuela, TV sets portray massive support for the government; outside, the country's young people look angry at the state and appear to be clashing violently with its supporters.

Venezuelan authorities have pulled the plug on Colombia’s 24-hour cable news network after it aired coverage of anti-government protests happening across the border.

NTN24 CEO Claudia Gurisatti called it “censorship of free press, an affront to citizens’ right to be informed and an attack on freedom of expression," El Universal reported.

She pledged to bring the matter to “all the organizations that advocate freedom of expression and human rights.”

The Committee to Protect Journalists said the Venezuelan government is dangerously close to turning the country into an autocratic state.

“President Nicolas Maduro’s government is not content to repress the few remaining independent voices in Venezuela, but is now going after foreign outlets that provide critical coverage of his administration as well,” CPJ Americas head Carlos Lauria said.

“Venezuelan authorities should immediately restore NTN24’s signal in Venezuela, stop censoring news sources that counter the official narrative, and ensure that Venezuelans can get vital information about what is happening in their country.”

That might be why the government-sponsored Telesurtv largely ignored widespread street protests.

TV broadcasts sympathetic to Maduro have been reporting on huge parades of red-clad supporters of the president. News anchors use the president's preferred terms like "fascist" and "ultra-right-wing" to describe the rival, anti-government protesters. "Venezuelan people reiterate their support for the government" reads the chyron at the bottom of TV sets showing Telesur, as seen in the above screengrab of the network's online livesream of President Maduro starting a speech Tuesday afternoon.