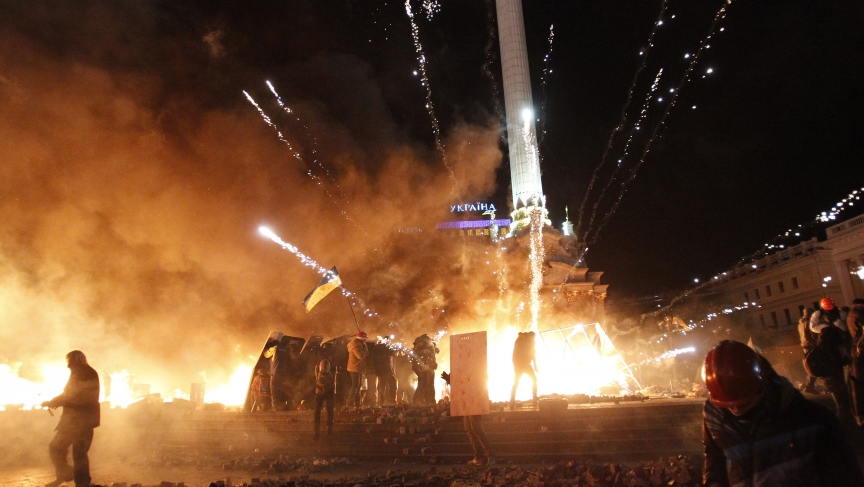 A firework explodes amid flames during clashes between anti-government protesters and riot police at Kiev's Independence Square January 18, 2014.

Violence flared in the Ukrainian capital of Kiev today, as police stormed the main anti-government protest camp to try and end several months of occupation. There were explosions and fires in Independence Square (known locally as the Maiden,) where protesters have been lodged since November.

According to the BBC’s live coverage, at least 18 people, including seven police officers, have died and many have been injured. The government deadline for protestors to leave the square voluntarily expired earlier today. Foreign governments are urging the Ukrainian government to end the violence.

Kenya's twist on 'The Office' lampoons life inside an aid organization

In the US, we had Dunder Mifflin, and in the UK, there was Wernham Hogg. Now in Kenya viewers are watching the antics of staff at Aid for Aid – a fictitious NGO run by a fictional country team leader named Scott Bartley. Just like in the US and the UK versions of The Office, it’s a ‘mockumentary’ and there’s a grain of truth in its satirical take off of life working for an aid organisation. Creator Hussein Kurji says he was partly inspired by The Office, as Andre Crossan reports for PRI’s The World.

Former NSA contractor Edward Snowden has been elected rector of Britain’s Glasgow University. And the students who elected him don't really care that he won't be able to ever visit campus.

The rector's job is to help allocate resources, work with the student council and help students raise concerns with the university leadership. And at Glasgow University, there's a history of students electing controversial, and absent, rectors. Both South Africa's Winnie Mandela and Israeli dissident Mordechai Vanunu served three years in the job from overseas. PRI’s The World spoke to Chris Cassells, a Ph.D. candidate who helped elect Snowden, about why he and his classmates chose Snowden.

Saudi women will need a chaperone for medical visits

It often seems one step forward, two steps back for women’s rights in Saudi Arabia. Yesterday, the first female editor in chief was appointed at a major daily newspaper in Saudi Arabia. Several days earlier, medical employees were told to turn away women from hospitals or medical clinics unless the women had male guardians.

The rule came from the Ministry for the Promotion of Virtue and Prevention of Vice, a semiautonomous agency often referred to as the "religious police." According to the website arabnews.com, the rule follow a fatwa issued by the Council of Senior Scholars. Women must be related to their male guardians — only fathers, brothers, uncles, husbands, sons or grandsons are acceptable. Qais Al-Mubarak, a member of the Council of Senior Scholars, explained that “women are prohibited from exposing body parts to male doctors in Islamic law, especially during childbirth. This does not include medical emergencies. Islamic jurisprudence makes exceptions.”

The Great Barrier Reef is being eaten

The Great Barrier Reef in Australia is being eaten alive by carnivorous starfish. Scientists from Australia's Institute of Marine Science (AIMS) have been monitoring the deterioration of the reef. They say three main factors are killing it: storms, bleaching of the coral from pollutants and munching by the Crown of Thorn starfish. The starfish are behind 42 percent of the reef's decline. The starfish smother the coral before digesting its flesh, according to Britian's Independent newspaper.

Japan continues to dig out from a record snowfall that blanketed some areas with a meter of snow over the weekend. It was the second major snowfall in a week. Reuter's reports that at least 23 people have died. Roads and trains have been blocked, cutting off parts of the country.