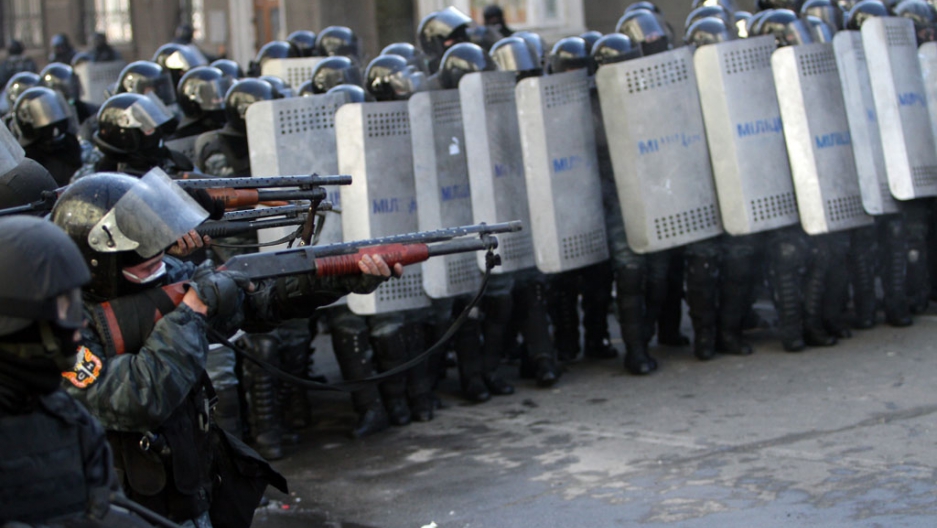 As the protests in Ukraine turned violent on Tuesday, journalists and researchers following the events reported various incidents that appeared designed to isolate the demonstrators.

TV providers apparently blocked Ukraine's opposition friendly Channel 5, one of the most popular news sources in the country, for much of the day. The Foreign Minister of Sweden Carl Bildt took to Twitter to condemn the regime for the shut down. The regime's "repression and violence" is unacceptable, he wrote.

Ukrainian journalist Maxim Eristravi tweeted that blocking Channel 5 signaled that, "Authorities are insanely hysterical." Roland Oliphant, Moscow correspondent for The Telegraph, tweeted that it is, "The worst sign people have been waiting for, for months."

.@5channel, the most popular news-channel in Ukraine is taken off the air nationwide. Apparently authorities are insanely hysterical now

The story from official channels was quite different. Yuri Miroshnychenko, a representative for President Viktor Yanukovych, said the government was not seeking a violent dispersal of the protest camps, according to the BBC.

According to the news and analysis site Ukrayinska Pravda, the Ukrainian president met with deputy head of the opposition party Fatherland, Oleksandr Turchynov, which was held up by Miroshnychenko as evidence that the president was "against confrontation and conflict."

But the police assault on the EuroMaidan (the name Kyiv's Independence Square has earned during the course of the protests) followed a complete shutdown of the city's subway system. And Evgen Vorobiov, an analyst at PISM Poland think-tank, said that with the metro closed and the entry to Kyiv tightly controlled, a de facto state of emergency had been imposed.

Metro in #Kyiv is shut down. The next is a brutal crackdown #Euromaidan. #Ukraine

Regions Dep. Kolesnichenko tells Russian state TV there will be no state of emergency, and that #Yanukovych will make statement later

Despite rumors that Kyiv’s airports were shuttered, France 24 journalist Gulliver Cragg and others said they were still opened as of Tuesday evening.

But even if you were able to fly into Kyiv, the road to the city from the airport was reportedly shut. Upon landing in Kyiv, Alexey Yaroshevsky, a reporter at Russia Today, said that it was almost impossible to get to the city center because police blockaded most major roads.

#ukraine Despite rumours, both kyiv airports ARE working but Boryspil told me road to Kyiv from airport is closed, airport itself MAY close

1st thing upon landing in #Kiev - most of roads leading to city centre blocked by police, almost impossible to move around. Taking a detour

Traffic into the city was reportedly limited starting at midnight on Wednesday.

Curfew is introduced in #Kyiv. Traffic will be limited starting from midnight. #euromaidan

1st thing upon landing in #Kiev - most of roads leading to city centre blocked by police, almost impossible to move around. Taking a detour

According to Espreso TV — a privately owned Ukrainian channel — President Yanukovych has also been ignoring phone calls from foreign diplomats. Christopher Miller, editor at English language newspaper Kyiv Post, tweeted that, despite repeated calls to Yanukovych, ambassadors of European countries have not been able to reach the Ukrainian president. German Chancellor Angela Merkel has been attempting to call Yanukovych unsuccessfully, Maxim Eristavi reported. The report was confirmed by the Germany government.

Ambassadors of European countries have not been able to get through to #Yanukovych on phone for several hours, reports @EspresoTV