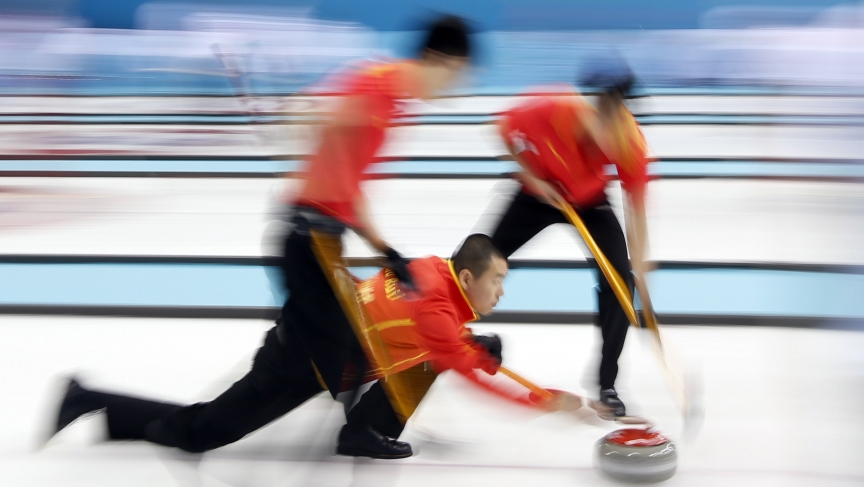 China's skip Liu Rui (C) delivers a shot during their men's curling round robin game against Britain at the Ice Cube Curling Center during the 2014 Sochi Winter Olympics February 17, 2014.

Right now much of the focus at Sochi is following the rocks - the curling rocks, that is.

But the men's and women's semi-finals will be happening Wednesday.

And it's going to be a tough day for Canadian curling fans. That's because one of Canada's best curlers is coaching the Chinese team.

"Marcel was hired by the Chinese last summer to go over and work with their respective teams, looking toward Sochi," says Jim Pringle, executive director of the Alberta Curling Federation.

Rocque is from Edmonton, Alberta. He left his hometown to take the Chinese team to Sochi.

"It's a bit odd to see him with a different colored uniform at the international level," Pringle says. "But there has been lots of precedent in regard to Canadian coaches and players working with other countries on an international basis."

And, many in the Canadian curling world don't see Rocque's move to the Chinese team as a betrayal to Canada. Instead, according to Canada.com, the Chinese coaching job is viewed as a potentially good career move that could improve Rocque as a coach for an eventual return to Canada.

At least, that's one of the hopes Rocque himself says he has for his new coaching gig. "I feel that I will be given the opportunity to gain some great experience and to learn from their way of approaching sport to hopefully one day have a similar opportunity in my own country," Rocque told Canada.com.