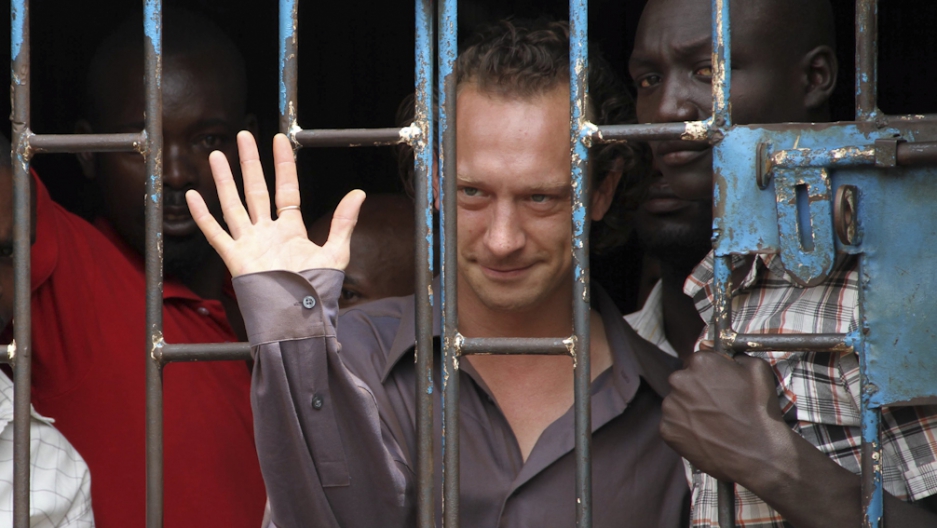 British theatre producer David Cecil waves from a court cell at the Makindye Court on September 13, 2012 in kampala, after being arrested for staging a play about a gay man despite a temporary ban by the country's media authorities. The groundbreaking play, titled "The River and The Mountain," was performed at several venues around Kampala last month despite an injunction by Uganda's media council, the government media authority, which had placed a temporary ban on the play pending review of the script.
Credit: ISAAC KASAMANI/
Share

NAIROBI, KENYA — Uganda’s President Yoweri Museveni signed a new anti-gay law on Monday imposing heavy jail terms, including life sentences, on homosexuals. The decision is a blow to gay rights in Africa, which already took a hit with a similar law signed by Nigeria’s president in January. But it’s also a surprise: Museveni had been delaying signing the bill, and had previously shown little support for the law, nicknamed the ‘Kill the Gays’ bill after an earlier version that included the death sentence.

So what happened? Here’s a quick rundown of recent days’ events, what it means for gays in Uganda

Museveni announced his decision at a meeting of his ruling National Resistance Movement party over the weekend. In doing so, he ignored Western calls to block the law, including from United States National Security Adviser Susan Rice, who tweeted that she “Spoke at length with President Museveni … to urge him not to sign the anti-LGBT bill.” Despite Western disapproval the anti-gay bill is a crowd-pleaser at home where elections are due in 2016. Museveni is eager to extend his rule so it seems domestic politics have outweighed donor concerns.

Museveni said his decision rested on scientific evidence provided by a government-appointed panel that showed “no connection between biology and being gay.” Rather homosexuality is a simple choice that should not be made. “The question I put to them was, are there people born like this?” said Museveni. “Now they are saying they are no such people. And they put it in writing,” he added. In his announcement Museveni struck a Pontius Pilate-like tone insisting that it is “those who are charged with the medical affairs of Uganda … who are historically responsible” for his decision which was reportedly greeted with “ululations and clapping.”

On Thursday, ironically, American researchers at Northwestern University made headlines for their study suggesting that "genetic factors explain 30 to 40 percent of the variation between people's sexual orientation."

What it means for homosexuals in Uganda

Actors performing "The River and the Mountain" in August 2012 at the Tilapia Cultural Centre in Kampala. The play was one of the first to examine the taboo subject of homosexuality in the country and the motivations behind legislation that, at the time, proposed to make certain homosexual acts punishable by death. (Isaac Kasamani/AFP/Getty Images)

Homosexuality is already illegal in Uganda, as it is in 35 other African countries. A new Nigerian law was passed only last month. The Ugandan law ratchets up the punishments but stops short of the death penalty that exists for homosexuality in Mauritania, Sudan, and parts of Somalia and Nigeria. In his speech to the party faithful Museveni railed against “the promotion of homosexuality,” the scourge of “mercenary homosexuals,” and the “exhibitionalism [sic] of homosexual behavior,” all of which are outlawed by the new legislation. In other words, it will be illegal to campaign for gay rights or for gay couples to, say, hold hands in public. It is unclear what exactly “mercenary homosexuals” are. A new crime of “aggravated homosexuality” — defined in the original bill as repeated homosexual acts, homosexual sex with a minor or individual with disabilities, or when one partner has HIV — could mean a life behind bars for repeat offenders. People who fail to report gay activity would also be committing a crime.

Many commentators trace the origin of the anti-gay bill to a visit by American Christian evangelists, including Scott Lively, in 2009. Soon afterward, Ugandan legislator David Bahati introduced the first version of the law which included the death sentence, since dropped. The White House is upset by Museveni’s decision, and not just because Ambassador Rice was so roundly ignored. President Barack Obama said he was “so deeply disappointed that Uganda will shortly enact legislation that would criminalize homosexuality." And he hinted at possible repercussions, saying the move would “complicate our valued relationship with Uganda.”

The Uganda law could still founder. According to Richard Kavuma, editor of Uganda’s Observer newspaper, a court could rule that the bill is unconstitutional. If so, Museveni will have played a cynical blinder, winning approval at home for his agreeing to sign the law but avoiding foreign censure when it is thrown out. For now, though Museveni is in combative mode. Clad in military fatigues he assured party stalwarts of his readiness to fight the inevitable “war with the homosexual lobby in the world” that will follow.