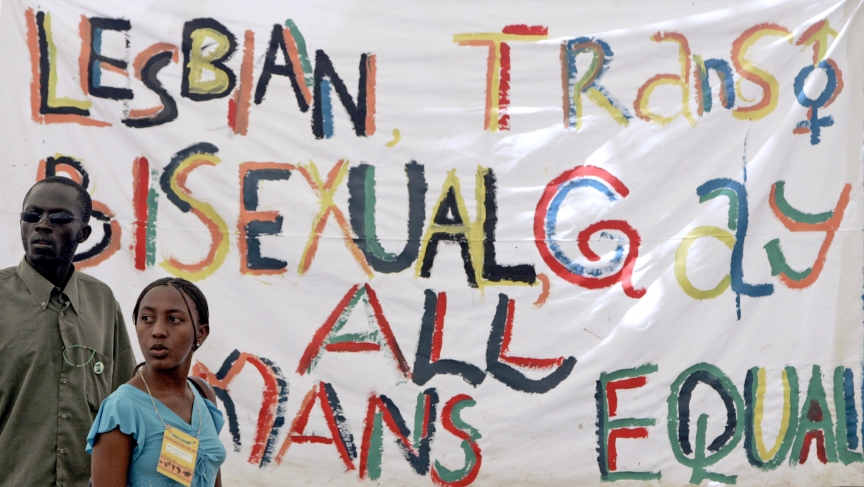 Unidentified participants attend a workshop during the World Social Forum in Nairobi, January 23, 2007. Homosexuality is a taboo topic and illegal in most African countries, where it is often condemned as being un-African.

Kenyan author Binyavanga Wainaina recently did something many gay Kenyans are too frightened to do. He came out, publically.

Wainaina is one of the most high-profile Africans to do that, let alone Kenyans.

Author Kevin Mwachiro says it's a big moment for the country and continent. Mwachiro is a former BBC journalist who wrote the new book, "Invisible: Stories from Kenya's Queer Community."

"I think Africa's gay community needed a good story," he says. "And Binyavanga's coming out was the good story that we needed. He's been challenging a lot of misconceptions about the gay community. He took the discussion, the perception, to another level."

Mwachiro, in his own way, is doing the same with his book. It tells the stories of LGBT Kenyans from all walks of life. So there are rural stories and urban stories, with Christians and Muslims, men and women, and transsexuals. Everyone. “It’s not just black Kenyans,” he says.

One example is a woman named Barbara. Her story moved Mwachiro to tears. He says Barbara was born male and made the transition to female.

Back in primary school, she was bullied and raped. The only saving grace for her was a Google search: "boy who feels like a girl." That one small search allowed Barbara to know what she was going through and that there was a name for it. In that moment, she made the decision to transition to female after high school.

"She was going to transition into being her true self," he says.

Early reviews for the book are positive. Here’s one response by Faith Oneya for the Kenyan literary website, Wamathai:

“If there is anything that the collection does well, then it is to compel the reader ... to look at the roots of our prejudices against queer people in Kenya," Oneya writes, "and to consider our actions — that one time in boarding school, or while playing a dad and mum game, that kid who everyone said was a tomboy, or too much of a girl — because that is when, for most of the authors, that who they were started dawning on them.”

But that review, in many ways, comes from the choir. The real question is whether Mwachiro's book is getting to people who need convincing in Africa?

Mwachiro says yes, and that his book is one more addition that is helping change the way Kenyans talk about LGBT issues. The book is getting press in the mainstream, local media. The author illustrates the impact in a simple moment he just had, when he appeared on a local radio show. The radio host put out the question to listeners, “Is the gay community in Kenya being discriminated against?”

Nothing much, right? But, for Mwachiro, it was a big shift in the conversation. Before, he says, a common question being asked was, are there any gay people in Kenya?

So it’s progress, step by step.

And steps remain. His publisher is based in Germany. And while there are a couple small presses in Kenya that would publish such a book, Mwachiro thinks most big publishers would steer clear of the topic.

He expects that to change, too. Mwachiro says Kenya has a vibrant gay scene, albeit underground. And it’s one that will continue to surface, as each story continues to move beyond the gay community in Kenya out toward the far corners of the country.