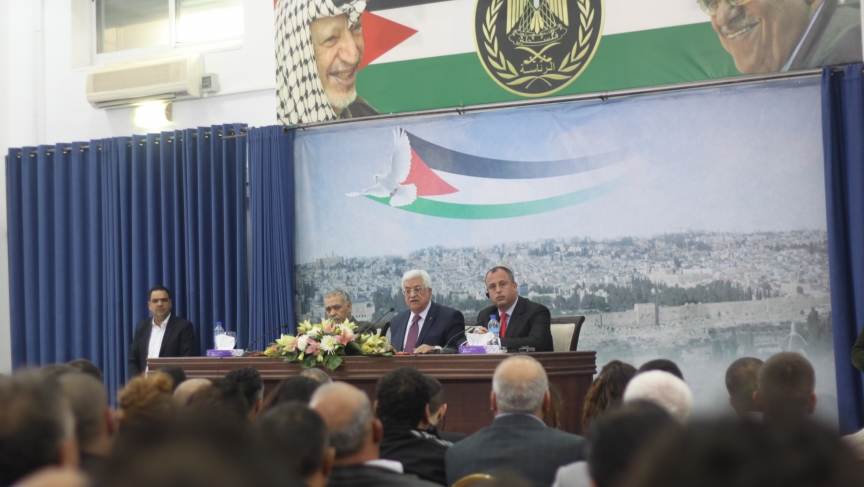 As Israeli and Palestinian leaders talk peace, there's little sign of progress. Still, on Sunday, Palestinian President Mahmoud Abbas made his boldest attempt yet at reaching out to the Israeli public. He hosted about 300 Israeli college students and activists in his West Bank headquarters in Ramallah.

Seven buses full of Israelis made their way to the Palestinian government headquarters, the Muqataa. A decade ago, this would have been impossible. The Muqataa was under siege by the Israeli army. The evening news at the time showed tanks pummeling the compound, while then-Palestinian leader Yasser Arafat made his way around the besieged headquarters with a flashlight.

The Israeli army ordinarily forbids Jewish Israelis from visiting Palestinian cities like Ramallah. Sunday’s visit was a rare exception. An Israeli lawmaker who heads a parliamentary caucus supporting the peace talks organized the visit of students and activists, mostly from dovish political parties.

For one of them, 28-year-old Ehud Rotem, the last time he was in Ramallah was in the middle of the night in uniform, participating in an operation arresting wanted Palestinians. As the bus pulled into Ramallah Sunday, Rotem and his girlfriend were glued to the windows taking pictures of “just everything … the houses, the streets, the cars, the people,” he said.

“I don’t consider them to be my enemy,” Rotem said of the Palestinians, “and I don’t want them to see us as an enemy."

Outside the Palestinian government headquarters, the Israeli visitors passed through metal detectors and guards patted them down. It was an unusual sight to see Israelis go through a Palestinian security check. For a fleeting moment, the tables were turned.

Inside the compound, Palestinian President Mahmoud Abbas sat at a table in front of a large poster of Jerusalem’s old city and a white dove soaring above it with a Palestinian flag attached to its wings.

“Salaam Aleikum, Shalom Aleichem,” — “ Peace be upon you” — said Abbas as he greeted the crowd in Arabic and Hebrew. Then the Palestinian leader continued in Arabic, with simultaneous translation into Hebrew and English, and addressed a slew of Israeli concerns about the Palestinians’ willingness to make peace.

The Palestinian leader tackled some the most sensitive issues of the Mideast conflict and made a range of conciliatory remarks.

Abbas assured the Israeli audience that he does not seek to flood Israel with millions of Palestinian refugees and change Israel’s social fabric. It was the most flexible Abbas has been on the sensitive issue of the Palestinians who were uprooted from their homes during the 1948 war that established Israel.

Abbas also admitted that Palestinian media and textbooks are, at times, hateful toward Israel, and he set the record straight that he does not deny that millions of Jews were killed in the Holocaust.

They were nice words from Abbas, but his Hamas rivals in Gaza were quick to condemn his meeting with the Israelis.

In a question and answer session, a few Israelis asked Abbas why he refused to recognize Israel as a Jewish state, one of Israel’s key demands during the current peace negotiations. Abbas responded by saying it wasn’t up to him to define what kind of state Israel is. Some in the audience said they wished they would have heard Abbas concede on that point.

But many were happy Abbas met with them at all. “It was impressive that he spoke eye to eye with us, the students in Israel,” one student said. “I hope it was a step to a better way.”

What did it feel like to be inside the Muqataa?

“Oh my God, it was amazing,” said another student. “I never thought I would be here. All my friends are going to really like this idea that I was here.”

But she didn’t have any photos of herself to post on Facebook. Palestinian security guards had asked the students to deposit their cell phones outside the hall.

So I snapped her photo with my camera and emailed it to her as a memento of the unprecedented visit — the largest number of Israelis said to have ever met with the Palestinian president in his West Bank headquarters.