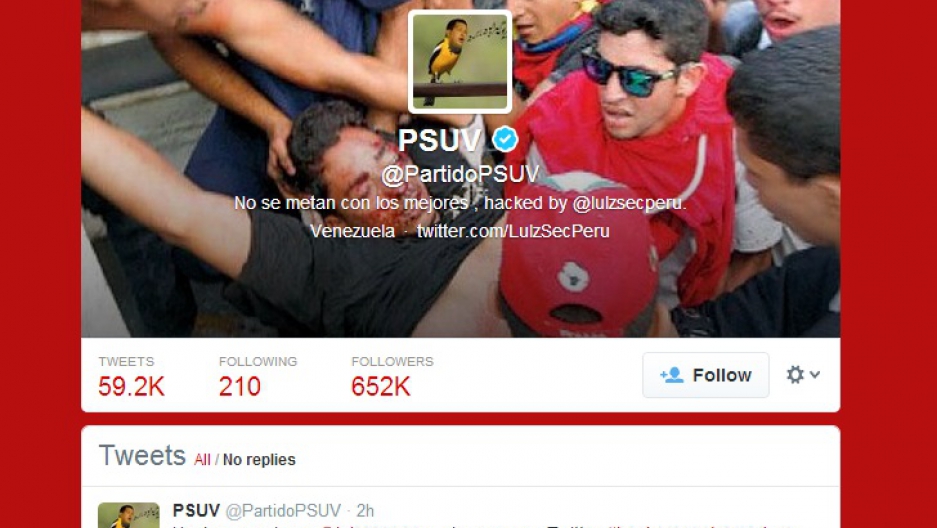 A screengrab of the United Socialist Party of Venezuela's official Twitter after hackers belonging to LulzSecPeru gained control of the account over the weekend.
Credit: Screengrab
Share

Hackers around the world are setting their sights on Venezuela's government web properties following violent repression against anti-government protesters and instances of internet censorship.

Spearheaded by South American Anons, as the hackers are known, the large-scale attacks against gov.ve subdomains began after three people were killed during demonstrations in Caracas last week. Shortly after the deaths, Twitter said that President Nicolas Maduro's government was blocking access to their image servers — preventing Venezuelan Twitter users from viewing photos being circulated online of the government violently dispersing protesters.

On Friday, government domains were plastered with the branding of Anonymous, LulzSec and several other lesser-known groups and individual hackers. By Saturday, it seemed as if the Maduro government could do little to contain the online onslaught.

"I would say this is one of the biggest cooperative operations involving South American Anons and Anons from the rest of the world to date,” one Anonymous hacker involved in OpVenezuela told GlobalPost.

“No exaggeration, the scale of this is huge, I watched servers falling like dominoes,” he added.

The government claims that opposition members incited the violence against protesters.

Over the weekend, hackers coordinated their attacks by communicating on a number of IRC (internet relay chat) forums in a blur of English, Spanish and Portuguese. With each passing moment, new links to defacements and downed sites made their way from IRC to social media.

Within the first few hours of the campaign, hackers from LulzSecPeru gained access to the official Twitter account of President Maduro's United Socialist Party of Venezuela, or PSUV.

“No se metan con los mejores, hacked by @LulzSecPeru," read the description of the account — “Don’t mess with the best.”

The PSUV account was then used to circulate images of the police repressing anti-government protesters. Party officials regained control of the account on Monday afternoon.

The Maduro government claims that Anonymous attacked dozens of sites.

"In the past 48 hours they've attacked 61 [web] pages of the government," Science and Technology Minister Manuel Fernandez told the VTV television network. He called the attacks a "cyberwar" declared by Anonymous "or whoever uses that name."

Attacks continued on Monday as DDoS offensives brought down Venezuelan government websites, including that of the Culture Ministry.

Detractors, including other hackers and web users, have accused the hackers involved in OpVenezuela of advancing the goals of capitalists and imperialists by fomenting unrest in the country. Several prominent hackers involved in the operation have stressed that they are strictly apolitical and that their efforts are only meant to support peaceful protest and curtail internet censorship.

“#OpVenezuela is not being waged in support for the political opposition of the current Maduro administration in Venezuela, it is a pure stance against censorship and state violence,” read a statement released by Anonymous hackers involved in the operation.

“These people have grievances and they are being prevented from airing them. That is wrong,” one hacker involved in the operation said in an interview.

Amnesty International has pressed Venezuelan authorities to “urgently investigate” the deaths of three people during protests in Caracas.

“It is extremely concerning that violence has become a regular feature during protests in Venezuela. If the authorities are truly committed to preventing more deaths, they must ensure those responsible for the violence, demonstrators, security forces and armed civilians alike face justice,” said Guadalupe Marengo, Americas deputy director for Amnesty International.

“Protesters still held in detention must be charged with a crime or immediately released,” she added.

Hackers are unsure when their fight against the Venezuelan government will end, but suggested that if censorship continues, their online attacks will as well.

“If there is further censorship of TV or the internet to inflame the situation it would be very hard to say [when OpVenezuela would end] ... the gloves would be off,” an OpVenezuela hacker said.