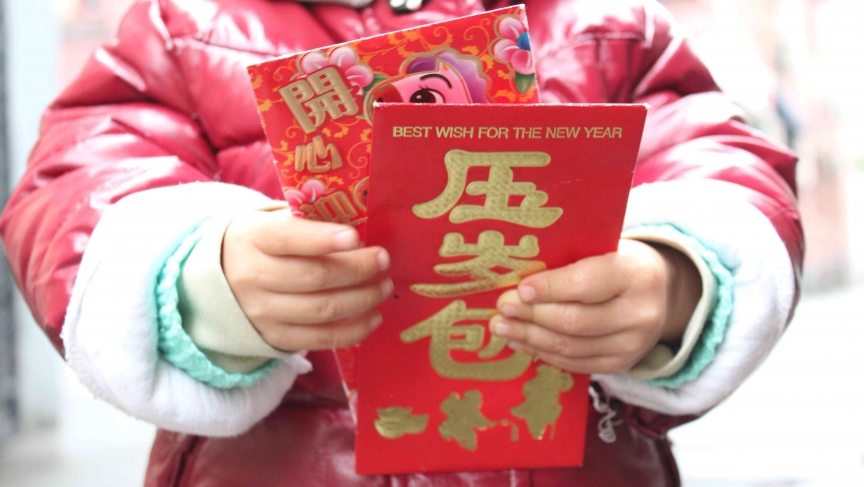 My husband and his mother quietly discuss hongbao over dinner at his family home. Hongbao are those little red envelopes filled with of cash that Chinese friends and relatives exchange at weddings, family reunions, and especially during Chinese New Year.

My husband asks his mother how much he should give the children of a high school friend he's seeing later that night.

It's the constant refrain during the New Year’s holiday — how much money did they give, how much should we give. My family in the US would never have this conversation. We're more likely to talk about what the next meal will be.

But I’m spending the New Year’s holiday with my husband’s family in rural Henan province, and I find myself spending a lot of time talking and thinking about hongbao.

I didn't grow up with this tradition, but my 1-year-old daughter will, so I figure I better learn more about it.

When I ask my Chinese mother-in-law, she can’t understand my interest. "You mean, you don't give hongbao in America?" she asks me, as if she can't believe me. "Here, this is life," she says.

Hongbao is deeply rooted in Chinese culture. If you want to understand China's value system, just look at the tradition of hongbao, says Yu Hai, a professor of sociology at Shanghai's Fudan University.

“In China, the top principle is how to make good relationships with other people,” he says, and hongbao are a financial investment in those relationships.

Since each relationship has a different value (for instance, you may be friendlier with one colleague or need a favor from a family friend), that translates into different amounts of cash at New Year's.

It's a fun tradition for kids — they rake in yasuiqian, gifts of money from family and friends to commemorate their turning a year older in the Chinese tradition. But it's all pretty confusing for an outsider like me.

I didn't realize it can be confusing for Chinese people, too.

“This is a science. It is a calculation,” says Professor Yu. You have to consider the contribution and the return.

He adds that there's no instruction guide for giving hongbao, and one mistake could lead to hard feelings or a loss of face.

My husband knows about that. He once forgot to give a hongbao to his cousin's child. The family forgave him, but they haven't forgotten.

Professor Yu says when it’s New Year’s, he prepares more than $3,000 to distribute for the holiday. My brother-in-law, a young professional, has less disposable income, but even he budgets almost $1,000 a year to give in hongbao.

The speed of China's growing economy is reflected in the tradition. As a child, my brother-in-law would get hongbaos of just a $1. Nowadays, they start at $15 and up.

“For me, when I was a kid, it was like a dream. Now that I'm growing up, sometimes I think it is a burden,” my brother-in-law says. “But when I think of my own childhood, when I got a hongbao, the feeling was so exciting.”

This year, my brother-in-law and his friends enjoyed a new kind of hongbao. Using his smartphone, he links his credit card with a popular app and, just like that, he sends out almost $200 in digital hongbao to his group of 11 close friends.

Luckily, I'm on his list. I open my digital envelope and find I've been gifted $15. Not bad.

It's part of a new online game that's become a sensation, as smartphone users race their friends to grab small cash gifts, usually of just a few dollars each.  Analysts say it's an ingenious marketing strategy that's getting people used to the idea of paying online.

But for my brother-in-law, it's really not about the money. It's a rediscovery of the excitement he felt getting a red envelope as a child. He says sharing digital hongbao with his friends has brought them closer together.

In China, people care a lot about tradition, he says, but “sometimes you have to have some new ideas.”

My brother-in-law's classmate walks over to my young daughter and slips some crisp red bills under her arm, about $65. She thanks him and calls him "uncle" in Chinese. Then she surprises us with a new word, one I swear I didn't teach her.