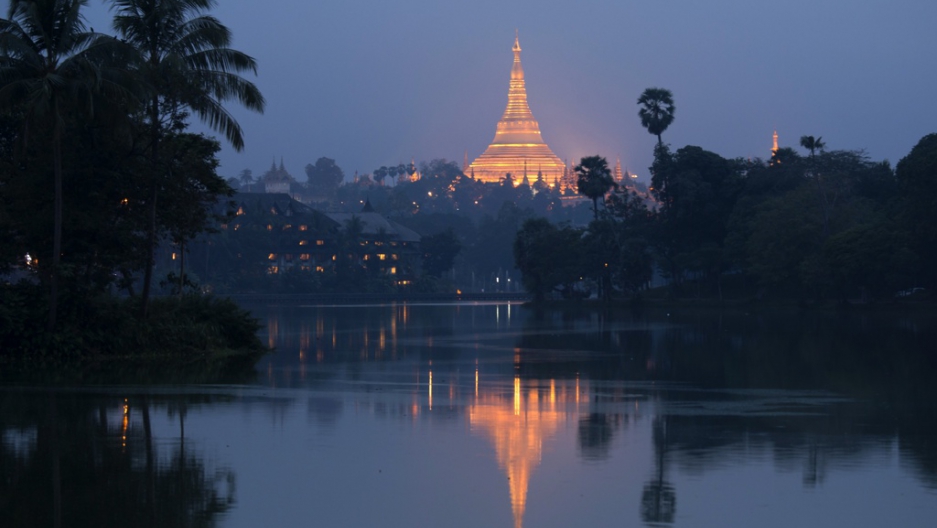 The Shwedagon pagoda is reflected in the Kandawgyi lake on Nov. 25, 2013 in Yangon, Myanmar.
Credit: FRANCOIS XAVIER MARIT
Share

Yangon is often described as stuck in time. After 120 years of British occupation ended after World War II, the once-prosperous capital missed out on the late 20th century’s Asian economic boom. The outcome: street after street of grandiose architecture built by the British empire. Yangon’s downtown buildings, though crumbling and mold-nibbled, are still stately and impressive. But don’t swoon too hard. Keep in mind that the British empire subdued Myanmar (then titled Burma) through three bloody wars. The occupiers’ architecture was, as a Myanmar architect wrote recently in an op-ed, “imposed on us in a show of British power.”

2. You can easily and cheaply chew your way to a mild high

There is a reason so many adult males in Myanmar resemble Ozzy Osbourne after he’s chewed the head off a bat. That blood-red liquid coating their lips and teeth is the outcome of chewing betel. For the equivalent of 20 cents, street stalls will offer a bag filled with areca nuts, tobacco shavings and lime paste. Chewing it brings on a quick head rush and turns saliva fire-engine red. The mild narcotic is potent as an espresso shot — but much cheaper.

3. Each year, the city descends into an awesome spectacle of aquatic warfare

A polite tour guide may describe Thingyan — a Buddhist New Year’s festival in Myanmar — as a time to honor elders with a cleansing ritual in which water is poured lightly over their hands. But on the streets, this celebration is better understood as a time to walk up to strangers and throw buckets of water in their face. Or blast them silly with a water hose. This traditional holiday has evolved into an explosive, noisy, soaking wet outdoor party that offers a much-needed release in a long-repressed society.

4.The punk rockers actually have something to rebel against

Curfews? Girlfriends? Yangon’s punk rockers have something much more menacing to rail against: five decades of totalitarian rule. Before the reform era kicked in two years ago, Myanmar was a police state. All lyrics had to filter through stuffy censors. Now Yangon punk bands (such as Side Effect and No U Turn) are finally free to perform, though laws against lyrics threatening national security still remain on the books.

5. The ferris wheels are powered by human beings

In a land where electricity is scant, and cheap labor is plentiful, the human-powered ferris wheel rules the carnival. A staple of street fairs in Yangon and beyond, the ride involves guys in flip-flops scurrying up the side of a ferris wheel and back down to create inertia that spins the ride — all to give paying passengers a thrill.

6. There are no Starbucks or McDonald's. Yet.

Just a few years ago, opening a Pizza Hut, KFC, or McDonald’s in Yangon would’ve constituted a criminal act. In fact, under a 2003 George W. Bush administration law, conducting almost any business transaction in Myanmar was forbidden. One outcome of these sanctions is that Yangon remains largely untouched by US franchises — a rare phenomenon in a globalized world. But this is sure to change as Western sanctions melt away.

7. The tea is edible and a better stimulant than coffee

Almost any restaurant serving central Myanmar cuisine will bring out a dish called “laphet thoke.” It’s exactly what it looks like: pickled tea leaves. Sour and addictive, the dish will also keep you awake for hours.

It is perhaps mankind’s finest noodle dish and it is ubiquitous in Yangon. Shan noodles are, well, rice noodles drowned in canary-yellow, liquid chickpea tofu and flecked with onions, chili flakes, and a few bits of pork or chicken. The dish belongs to the Shan ethnicity, genetic cousins to Thais who inhabit a region about the size of Tunisia in Myanmar’s northeast.

9. The city is an awesome mishmash of cultures

The headlines suggest that Myanmar’s Buddhists and Muslims are constantly at each others’ throats. But in Yangon, the two faiths have long managed to coexist in close proximity. The muezzin’s call to prayer will ring out on one street; you’ll hear monks chanting on the next. The city is even home to an ornate synagogue and massive cathedral left behind by British colonial-era architects.

10. You can eat grilled pork tails in Chinatown (yes, that's a good thing)

If your spirit is unmoved by glittering pagodas, try another religious experience in Yangon: eating a grilled pig tail. First you’ll experience the perfect, gristly crunch of pork skin. Then melted fat will ooze over your tongue. Did that sound off-putting? You just haven’t had one yet. Go to Yangon’s Chinatown to get converted.

11. The Shwedagon Pagoda is one of the greatest sights anywhere

Yangon has one of Asia’s most magnificent skylines thanks to Shwedagon Pagoda, an ancient, golden spire ascending 325 feet into the sky. It's revered by Myanmar’s Buddhists and exalted as the nation’s greatest treasure. And it appears just as magnificent in person as it does in the postcards.

The bad news: Myanmar is cursed with a dysfunctional economy still recovering from decades of top-down policies concocted by a ruling military. The good news: a day out in the city is extremely cheap. You can fill your stomach with curry for $1.50 and catch taxis for $2. Threadbare guesthouse rooms go for $25. Just keep in mind that any higher-end services — Western-style hotels, air-conditioned vans, etc. — are unusually expensive thanks to a bubble economy fueled, in part, by all the tourists and investors surging into a city largely ignored over the past few decades.