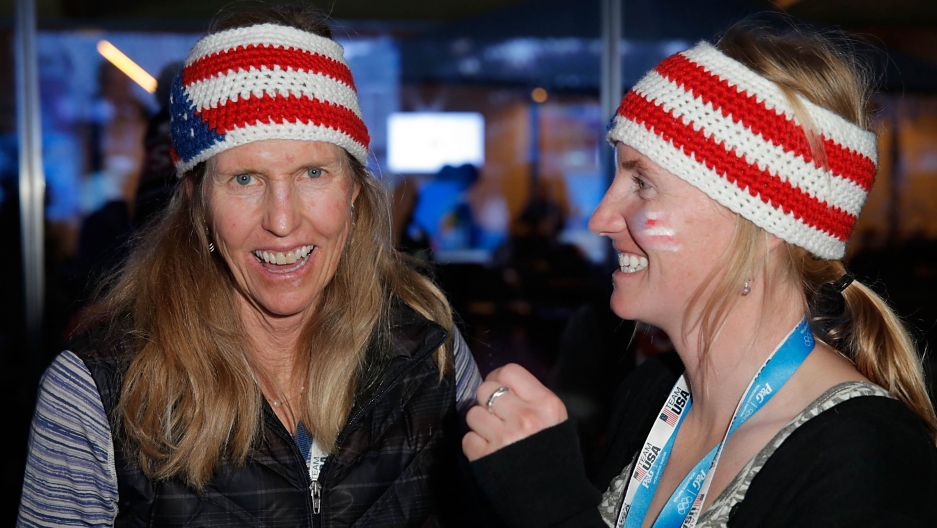 American fans are living it up.
Credit: Joe Scarnici
Share

SOCHI, Russia — Jim Solberg had been looking forward to this trip for an entire year.

Then, a month before he was due to leave for the Winter Olympics in Sochi, the affable, 58-year-old manufacturing representative from Detroit started wondering.

As he was preparing for the games, so, it turns out, was the international media: They churned out reports detailing Russia’s looming terrorist threat and its increasingly dismal human rights record, punctuated by last-minute accounts of substandard accommodations.

It was almost enough to make Solberg think twice.

“But then I get here, and it’s nothing,” he said incredulously. “It’s just a joke.”

As it turns out, some foreign visitors are actually enjoying Sochi. That’s come as a shock at times given the breadth of negative media coverage Russia faced in the lead-up to the games.

The issues are dead serious, to be sure: Russia is still gripped by a simmering Islamic insurgency only several hundred miles to the east that leaves hundreds dead each year, while the country’s anti-gay “propaganda” law has unleashed a wave of vigilante attacks.

But so far at least, the fears of violence and repression haven’t played out here, and the sun-kissed, tree-lined streets of this rejuvenated Soviet-era resort are providing a stark contrast to what many may have expected.

In short, it’s a picture of almost total normalcy — just what President Vladimir Putin had aimed for with his country’s $50 billion grand turn on the world stage.

It’s also why many here are wondering: What’s the big deal?

“I think because people don’t know enough about Russia — I certainly didn’t before I got here — it inflates things and makes it more than it really is,” said Dean Cockell, a 62-year-old from Winnipeg.

Many tourists say they’ve felt largely at ease with the security measures here.

Putin’s tight security regime appears more subtle than some expected around town, where police officers patrol nearly every corner. Many appear to have honed their skills at blending into bus stops and corridors, and heavy weaponry is a rare sight.

Instead of armor-clad men with machine guns, there are security officers in snappy purple tracksuits manning metal detectors at train stations and venues.

That was unexpected for visitors like Walt Molawka, a 64-year-old fan from Atlanta, who on a recent afternoon was walking with his friend Solberg through a lush, neatly manicured park along Sochi’s main street.

“I feel a lot safer here than I do in Detroit or Atlanta,” he said. “It’s incredible.”

Beyond the concerns about personal safety, reports have also detailed the pace of construction efforts — and the massive corruption behind them — to turn this once sleepy, seaside resort into an international Olympic city.

Russia’s mad dash to make it in time for the games came into greater focus just days before the opening ceremony, when images of hotels and other facilities in dubious condition spread like wildfire.

But Lisa Brackmann, a San Diego-based author in her 50s, dismisses the “fields of mud and broken toilets” she said were ominously forecast before the games.

Sure, she says, the venues have some “rough edges,” but it hasn’t been enough to spoil her stay.

“I’m happy to take it all in and react to what’s actually there,” she said, “and it’s been very pleasant.”

Molawka, meanwhile, suggests US media coverage overplayed some concerns — particularly over Russia’s controversial anti-gay law — to the point of discouraging people from attending.

“The hype was terrible and very disappointing,” he said.

The outpouring of positivity around the games is undoubtedly what Russian officials had hoped for amid the steady barrage of criticism.

The charm effect has worked so well that Wednesday’s jailing of an environmental activist for three years passed with little comment in this buzzing coastal hub, as did Thursday’s expansion of a law banning the adoption of Russian children by same-sex couples.

More from GlobalPost: Italy's JFK is poised to take power

But even in sport-crazy Sochi, not everyone’s been fooled by the dog and pony show. Although major fears have largely given way to a jovial Olympic spirit, some say they’ve still run into trouble.

Members of a Baptist church from Cincinnati said they were searched and reprimanded by police for handing out Russian-language bibles to locals.

Although they’ve been thrilled by the warm and welcoming locals, they also suggest problems have been swept under the rug.

“[Officials] say Russia’s a free country and that they’re open,” said 34-year-old Paul Taylor, a member of the First Baptist Church in Milford, Ohio, “but it doesn’t look like they really are.”

So far, so good. Then again, there’s still another week of the games left.