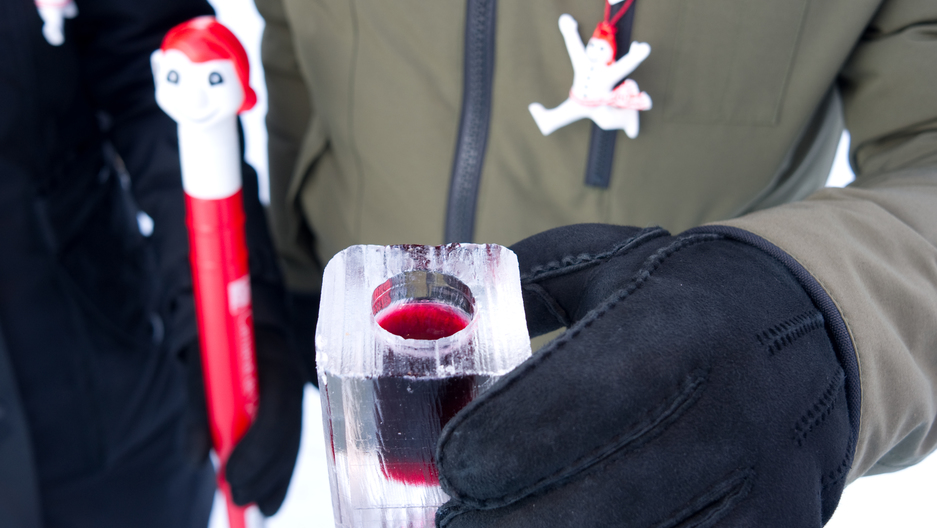 A Quebec City carnival-goer warms up with a cold one – Caribou on ice. Quebec consumes up to 5,000 cases of Caribou yearly, nearly all of it during the winter carnival, and most of that outdoors.

Everyone loves a parade — but on a frigid February night in Quebec City, as crowds stomp frozen feet in two feet of snow, some might love it just a little less.

Quebec is one of the coldest cities in North America, with nighttime lows in the single digits in February. That's when the city's two-week “Carnaval de Quebec” draws Quebecers outdoors for dancing snowmen, diving acrobats and an improbable wintertime party.

And that's where Caribou comes in — as in the Canadian version of reindeer, with a capital C. The furry-antlered animal is the namesake of Quebec's favorite wintertime outdoor party drink. When it's really cold outside, and it usually is, people here say Caribou is liquid sunshine.

“It keeps you warm, so you can continue to watch the parade,” says Nadia Lo Russo, bundled up with a cup in a be-mittened hand. “That's why we drink it.”

Caribou is a traditional alcoholic punch, sold only by Quebec's liquor board — up to 60,000 bottles a year, nearly all during the carnival season. At carnival time, the streets and parks of the old city are lined with bars sculpted out of ice, where bartenders in parkas serve Caribou shooters from molded ice shot glasses. Some people bring their own, in hollow plastic canes topped with the head of Bonhomme, Quebec's official carnival snowman.

“You unscrew his head, you pour the drink in, and you walk around on the street drinking the Caribou out of the cane,” explains tour guide Steeve Gaudreault. “Scientifically speaking, alcohol doesn't make you warm — it's actually the opposite — but it makes you feel warm.”

Feeling warm in the cold is the holy grail here, and that may be why Caribou is a beloved cultural icon. This year, for the 60th winter carnival, organizers set up an official Caribou museum, a revival of La Voûte à 'Ti-Père, a 70s-era basement gathering spot for Caribou aficionados, in Quebec's historic old town.

On a Saturday afternoon, folklorist and musician Jacques Dupuis entertains the crowds there with a fiddle-and-step show of traditional Quebecois music. His first song celebrates romance's triumph, over Caribou. “Caribou m'endors, mais l'amour me reveille encore,” sings the crowd, “Caribou knocks me out, but love wakes me up again.”

But the star attraction at the museum is the drink itself, served up traditionally steaming hot or cold in little plastic cups. Bartender Richard Le Blanc says, on weekends, he serves up to 800 shots a day. He warns repeat customers to take it slow — the sweet flavor masks a serious kick.

“One is okay, two is perfect. Three — you're getting close to danger,” he says, with a laugh. “You're going to make the angel in the snow, and maybe you do things that you hope no one is going to take a picture on Facebook!”

Caribou's name, further alluded to by a snowbound herd of caribou on the bottle's label, is not a coincidence. It's named for its resemblance to — many say its original recipe containing — caribou blood.

“It used to be a mix of alcohol and caribou blood, very nutritious,” says Dupuis the fiddler, wiggling his eyebrows in gory glee. “But they changed the recipe because some people were not very into blood.”

A good story, says Gaudreault, who leads historical tours of the city, but too good to be true. He says the name stems from a simple misunderstanding: native people mistook the dark-colored fortified wine enjoyed by French trappers for caribou blood.

“That's what it looked like,” he says. “The name kind of stayed and it became just a cultural thing to drink in the winter.”

Whether there once was or there wasn't, the one thing everyone agrees on is there's no blood in Caribou today. So, what IS in it? The bottle is coy, listing only “wine, alcohol, natural flavors and sulfites,” adding up to a total of 22.9 percent alcohol. The back label boasts it's the beverage of choice at Quebec's snowshoeing competitions and maple-sugar parties.

An informal poll around town turns up a whole liquor cabinet-worth of guesses. Alexandre Naud, an archeology student tending one of the carnival grounds' outdoor carved-ice bars, is sure it's a cocktail of whiskey and red wine. “Port, sherry, vodka and brandy,” insists another temporary bartender, railway station manager Robert Verrault. New Yorker Bill McGuin, tasting his first Caribou, heard that it's a mix of red wine and vodka.

In fact, the official recipe is a trade secret.

“If I tell you, they have to kill me,” jokes Phil Tieman of Mondia Alliance, which produces the only commercially available version of Caribou. All he'll give away is a basic outline: wine, grain alcohol, and two “very specific” Quebec spices.

But while the mystery bottle with the reindeer on it may be the only Caribou Quebecers can buy, there's no monopoly on the Caribou that Quebecers have been making at home for generations.

“It's like the spaghetti recipe,” says bartender Richard Le Blanc. “You have the basic recipe and everyone adds what he likes. It can become anything, finally, as long as it's wine and alcohol.”

So there are as many Caribous in Quebec as there are, well, caribou.

“My personal recipe?” says Steeve Gaudreault, the historical tour guide: two-thirds of a bottle of a good, un-oaked merlot or bordeaux, one-third of a bottle of good brandy. Some people add cinnamon or anise as well — but Gaudreault is a purist.

“I add, personally, a little bit of maple syrup,” he says. “Let it sit for a month, and there you have it: Caribou is born.”