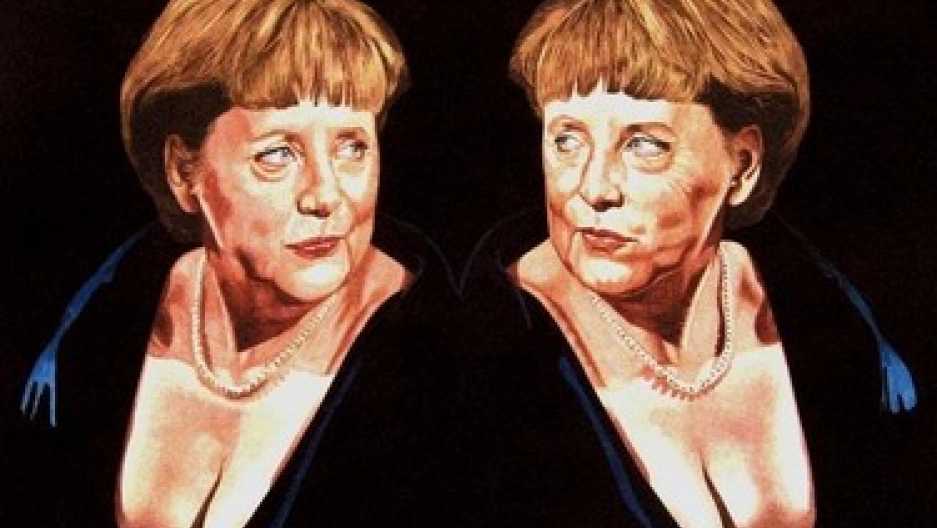 BRUSSELS, Belgium — It seems this portrait of Angela Merkel is just too shocking for the European Parliament.

Officials there ordered the German artist Hans Niehus to remove his pictures after copping an eyeful of the chancellor’s plunging neckline and the other controversial images on display.

"The security said 'take it back' after just one and a half hours,” Niehus told GlobalPost from his base in the Dutch city of Vaals. “They weren’t even hanging on the wall, they were leaning on the glass."

Niehus's double portrait was based on a 2008 photo of Merkel in a low-cut dress snapped at an opera in Norway. It provoked widespread coverage in the German media at the time.

"It was such a surprising image," Niehus recalls. "I was so fascinated by this decollete that I had to do this picture."

A spokesperson for the European Union's assembly declined to confirm that it was the Merkel painting that led to the exhibition’s being prohibited, saying only that the show was "clearly of a political nature" with isn’t allowed by the parliament’s rules.

The parliament's Brussels building does host regular shows of works by artists invited by lawmakers, but they must always be of "regional or cultural nature" and avoid overtly political themes.

More from GlobalPost: Italy's JFK is poised to take power

Nevertheless, the legislator who invited Niehus to display his works was disappointed.

"This is not pornographic. It might be a little bit daring, but I don't think it's unacceptable," said Juergen Klute, who represents German opposition party The Left. "From my point of view a painter, an artist should give a mirror to society and try to provoke some thoughts."

One painting has Che Guevara playing golf. Another features Gregor Gysi, a leading member of Klute's own party, partnered with supermodel Claudia Schiffer in a pastiche of the farming couple pictured in Grant Wood's painting American Gothic.

Following their expulsion from the parliament, the Niehus' paintings have been put on show in the Brussels Press Club.