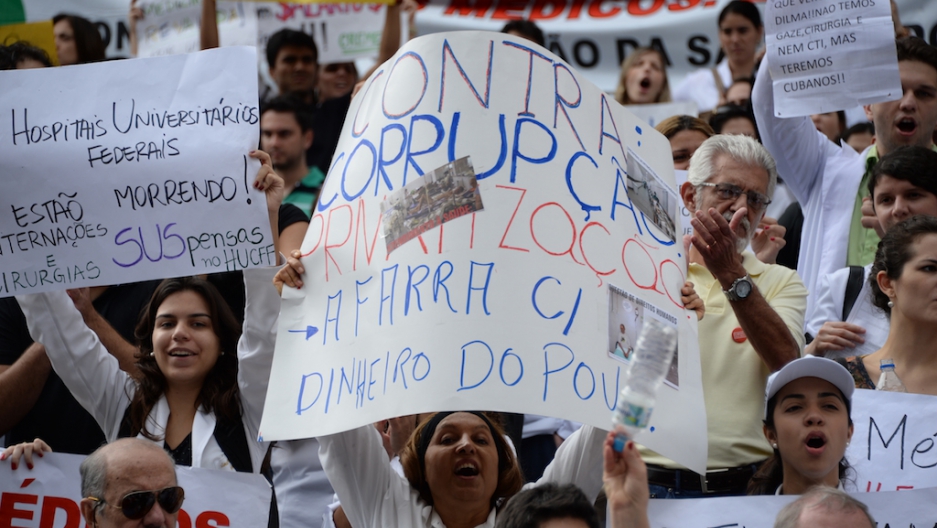 Medical and health workers protest against the working conditions in the public hospitals and the hiring of foreign doctors for the SUS health care system, in Rio de Janeiro, Brazil, on July 3, 2013.
Credit: VANDERLEI ALMEIDA
Share

SÃO PAULO — Health is a legal right in Brazil. Ever since the country's constitution was rewritten after the fall of the military government in 1988, Brazil has guaranteed every citizen — and indeed anyone who sets foot in the country — the right to access health care services, at least in theory. Twenty-five years after passing universal health care, however, the country still hasn’t kept its promise.

With a population of 200 million spread across the world’s fifth largest country, the enormity of Brazil means that services aren't the same across the board: São Paulo, for example, has plenty of hospitals, but even ill-equipped clinics are few and far between in backwater states in the Amazon. Geographical distribution is just one barrier. Financial and technological gaps also have many saying that the universal health plan — dubbed SUS (Sistema Único de Saúde) — hasn’t fulfilled its guarantee to cover everyone in Brazil.

“Health is a human right to be protected by the Brazilian state. But the health care system is murky,” said Fernando Aith, a lawyer and professor of preventive medicine at the University of São Paulo (USP) who has studied the shortcomings of the health system for decades. “It's based on the idea of human dignity and solidarity but it's still a challenge for us.”

Under SUS, Brazil proposed to cover its entire population under a single publicly funded health care system. The idea sounded noble. Early results were positive. High immunization rates — emblematic of successful health care systems — were an early success. Today, Brazil has one of the world’s highest vaccination rates, Aith said. “But we have inequalities in our health system. It depends on where you are.”

And, what you need.

Taking the government to court

Accessing health coverage certainly has been a challenge for Regina Prospero, a São Paulo native in her late forties. By the time her son Niltinho was a toddler, he was suffering from a rare hereditary disease called mucopolysaccharidosis (MPS) where his body couldn’t eliminate its own metabolic waste. She took him to state-funded city hospitals every week but the doctors didn’t know what was wrong. “There was a lack of information. They did not know what they were dealing with,” Prospero said. “No medical team could tell us what was wrong with him.”

Without the appropriate medical care, Niltinho died at age six.

“Nitinho’s brother Dudu was born with the same disease,” Prospero said. Fortunately, her husband tracked down a Bayer clinical trial for MPS in southern Brazil and enrolled Dudu as a subject. Thanks to a medication called galsulfase, the little boy started responding. But at the study’s conclusion, Brazil’s public health care system wouldn’t cover the drug that was keeping him alive, Prospero said. Its price tag can be as high as $365,000 a year.

Like any mother would, Regina Prospero did everything she could to avoid Dudu meeting his brother’s fate. So she took the Brazilian government to court, claiming that health was a right in Brazil and therefore the government was obligated to pay for Dudu’s treatment. She and her husband eventually won the lawsuit.

“We started the judicial process because the government wouldn’t provide what my son needed and what I couldn’t afford,” Prospero said. “We managed to get the government to pay for what it had guaranteed in the federal constitution.”

Prospero is not alone in demanding coverage from the public health care system. There are currently more than 300,000 pending cases demanding health services, said Aith, the preventive medicine scholar at USP.

“Many will die without a chance to receive treatment. That is very sad,” Prospero said. Today, she said she continues to fight and is involved in over 500 lawsuits for patients with rare diseases.

In 2011, almost 13,000 new lawsuits were brought against SUS, a 22 percent increase since 2009. The courts have sided with plaintiffs in over 70 percent of the cases, leading the government to spend more than $150 million in settlements in 2012. Successful cases have included Brazilians seeking reimbursement for out-of-network services, those looking for a new drug to be put on the list of state-approved medications -- even someone suing for a bed in the ICU.

Still, Prospero knows that without significant reform to the system, many will meet her firstborn’s fate.

The need for reform

Even with Brazil’s universal health care plan, about 25 percent of Brazilians seek coverage under private plans that ensure speedier and higher quality service. These wealthier individuals can afford to purchase the plans, which average $88 a month, depending on access and quality.

“Even the physicians don’t use SUS. They go to the private clinics,” said Jose de Filippi Junior, São Paulo’s municipal health secretary. But at the same time, he said, SUS needs the private sector. “We contract with them for services and support.” The public system, for instance, doesn’t cover major surgeries or expensive testing or imaging, de Filippi pointed out. In those cases, patients are referred to the private sector, which in turn gets reimbursed by the government.

All this makes Brazil’s national health care system a hybrid of private and public entities -- a strategy that plenty of other countries have used to ensure coverage. Indeed, President Barack Obama’s Affordable Care Act hopes to corral the uninsured in the US by offering them access to private health services through public exchanges.

Still, the problems with SUS run deep. Shortly after legalizing the plan, Brazil experienced a major population transformation, which made implementation more difficult. Its population grew 58 percent between 1981 and 2009. Cities boomed. Favelas grew. But the number of hospitals stayed relatively stable, rising marginally from 6,342 to 6,875.

In the face of this boom, Brazil's solution to maintaining universal coverage was to emphasize primary care and recruit family health teams to follow up on patients. This meant cobbling together teams of doctors, psychologists, nurses and social workers to work on a case-by-case basis with people in their respective communities. The idea was that investing in primary care was cheaper than building expensive things like urgent care centers, cancer hospitals, and imaging facilities. And it still continues today.

Jeanneth Orozco is a Bolivian social worker on one such ad-hoc team in São Paulo’s Bom Retiro neighborhood, a largely Bolivian enclave. Because she’s from La Paz, she is integral in reaching out to the large immigrant population living in the area. Almost every day she’s out following up on patients and talking to them about managing their health.

Sixty-one percent of Brazil's population is now covered by over 30,000 of these family health teams, Aith said. But many holes still exist. There’s a notion among Brazilian doctors that primary care isn’t as glamorous as being a specialist. And Brazil is already short on doctors. As São Paulo’s health secretary de Filippi explained to me: “Out of 80,000 health care employees in São Paulo, 12,000 are physicians. We need another 2,000.” The problem is so severe that Brazil is in the midst of hiring foreign doctors under a controversial project dubbed 'More Doctors.' The proposal hopes to fill the ranks of primary care doctors throughout the country.

Another proposal seeks to reform taxes. In Brazil, public health care costs are split between municipal, state and federal governments, with the municipal government paying the lion’s share. Federal funding for SUS has been cut back continually for decades, and was just 3.1 percent of GDP in 2011.

This needs to be reformed, said de Filippi. “We need to find an exclusive source to fund the public system,” he continues. Taxes on the rich and their estates could be one solution, he said.

The government is also exploring ways to incentivize young Brazilian doctors to work in the public system as a way to widen the system’s reach and improve the image of primary care. One proposed plan would offer medical students a better score on residency entrance exams to work in remote areas of Brazil. It’s akin to a domestic ‘Doctors without Borders’ program that could help plug some of the holes in Brazil’s public health system.

Until large-scale changes to SUS are made, one thing seems certain: as more patients and their families sue the government, chances are that it will lose in court and be forced to grant them the medicine or services they need.

Still, these court decisions won’t extend beyond individual plaintiffs. For every new patient, a new lawsuit must be filed, which mires Brazilians in a tug-of-war with Brazil to live up to what it’s promised.

Aleszu Bajak is a science journalist and current Knight Science Journalism Fellow at M.I.T. He recently spent three weeks in Brazil with support from the Knight program and the Harvard Global Health Institute. His writing can be found at aleszu.com. Follow him on Twitter @aleszubajak.