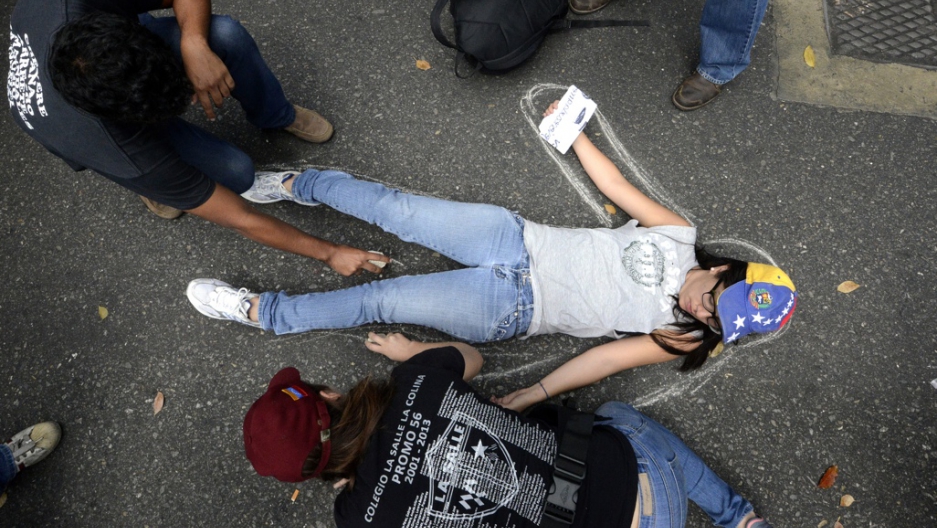 Venezuelan protesters draw a chalk outline to commemorate a fellow student who was killed in demonstrations against the government.
Credit: Juan Barreto
Share

Anti-government protests this week have convulsed the country and descended into violent clashes with government sympathizers. On Wednesday, at least three people were killed by gunfire, two of them opposition students and one a pro-government demonstrator.

Chavez’s folksy style — think him calling George W. Bush “the devil” for invading Iraq — and populist anti-poverty policies made him wildly popular both at home and internationally.

But his political heir, President Nicolas Maduro, lacks el Comandante’s touch and his only response to the economic chaos he inherited has been repression. For many Venezuelans, that has added to the list of woes their country now faces.
Here’s a rundown of problems fueling the unrest.

Venezuelan consumer prices rose 56 percent in 2013, giving the troubled South American nation what may be the world’s highest current inflation rate. Economists say the country’s fixed exchange rate has fueled the problem. It stops the flow of imports and foreign currency into the country and triggers the mismatch between supply and demand that has sent prices rocketing. Maduro has now introduced a more complex set of currency controls, including different rates for locals, tourists and industry, but critics warn it’s devaluation in disguise. If hyperinflation isn’t around the corner then that may only be due to the rigid, official, military-enforced price controls. They prompted a run on appliances last year as thousands of mainly poor Venezuelans scooped up plasma TVs, fridges and other products on the cheap.

The price controls may have slowed inflation — and the jury is still out on that one — but they’re likely contributing to another problem: shortages of basic goods. The country’s dearth of toilet paper is probably the most infamous case, prompting some to even stock up on trips abroad. But exasperated Venezuelans increasingly have to scour empty supermarket shelves for all kinds of other products, including even corn flour, a staple of the Venezuelan diet. The problem is now so severe that one student invented an app to help shoppers track down products. Meanwhile, supermarket executives insist the price controls make it all but impossible for their stores to keep full inventories. Hundreds of retailers accused of not complying have gone to jail.

This could be the only issue that bugs Venezuelans more than the economic crisis. The murder of a former Miss Venezuela earlier this year made global headlines, but the country’s violent crime tsunami was hardly news for locals who have long feared to leave their homes after dark. According to United Nations statistics, Venezuela’s 2009 homicide rate was 49 per 100,000 residents per year (page 94), roughly 10 times higher than the US’s, and making it the world’s fifth most murderous nation. But nonprofit think tank the Venezuelan Violence Observatory, which accuses the government of massaging its numbers, recently put the rate at 79 per 100,000. If confirmed, that would make Venezuela almost tied with the country ranked highest on the UN’s homicide list: Honduras. Unlike the UN, the Observatory reached its numbers through its own independent research, including from media reports of slayings. The government’s response to the bloodshed, including banning media from publishing photos of murder victims, has only made the senseless slaughter spike further.

More from GlobalPost: Murder of Miss Venezuela shocks the mecca of beauty queens

Targeting the messenger has been typical of both Maduro’s and Chavez’s presidencies, and nurtured opposition accusations that Venezuela is sliding into dictatorship. El Comandante once booted researchers from Human Rights Watch out of the country, while 15 years of Chavismo have decimated Venezuela’s media landscape. The purchase last year of Globovision by a pro-Maduro group of businessmen, and the resulting exodus of the network’s journalists, means there is now not a single national TV station critical of the government. Under laws intended to stop public “unease,” Venezuelan media are prohibited from showing the mayhem unfolding this week on the nation’s streets. One Peruvian newspaper today published this clip of the final moments of one of the protesters — footage it received from Venezuelan paper El Nacional, which is barred from publishing it. Meanwhile, newspapers that dare to question the official narrative are on the brink of going online only — not as part of a new Web 2.0 business model, but because imported newsprint is running out. The government appears happy with the situation. Maduro even warned last week that the “bourgeois media” would be subjected to “very strict” new controls to stop their “propaganda.”

The rot eating away at Maduro’s support has deepened with doubts over his victory in last April’s presidential elections. Many Venezuelans believe the vote, which Maduro won by less than two percent, was rigged. They have never accepted the 51-year-old former bus driver and union leader as their president. The opposition sent a thick dossier of alleged electoral irregularities to the Inter-American Court of Human Rights, although foreign observers, including from the Carter Center, gave the elections a clean bill of health. Nevertheless, the government’s response to the accusations only fueled the fire. After going back and forth, the Maduro administration allowed a partial review and declared the vote clean but refused to allow the full recount demanded by the opposition that would have fully confirmed no electoral fraud. That plus the well-documented heavy use of state resources by Maduro during the electoral campaign, including compulsory state broadcasts routinely cutting in over TV news bulletins, has allowed the doubts about the legitimacy of Maduro’s presidency to fester.