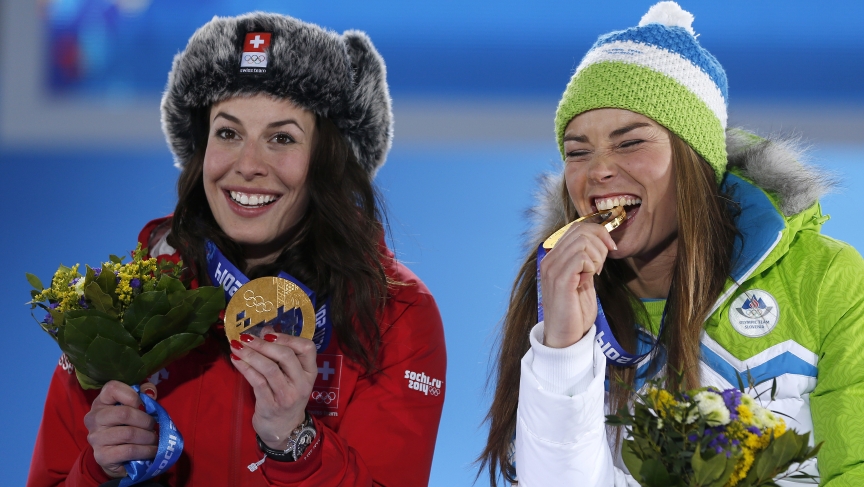 Timing at the Winter Olympics is a funny thing. This week, two skiers in the women's downhill race clocked the same exact fastest time: 1 minute 41.57 seconds. Officials called it a tie and the two skiers both got gold medals.

That's a first for the Winter Olympics.

That might not have happened if the two athletes had been speeding down the luge track. That competition is measured down to the 1000th of a second. Turns out, each sport's federation determines the timing rules.

"We have to time, what the rule is, and what the federation is asking for," says Peter Huerzeler with Omega Timing.

The Swiss watchmaker has been the official timekeeper of the Olympic Games since 1932. And things were a little different back then.

"In the beginning, when they started in '32 it was in seconds," he says.

So from timing down to the second back in 1932, to what now?

So why not do that for downhill skiing? Well, the International Ski Federation (FIS) says it's worried about the integrity of the time when it gets down to such small numbers. So the FIS has no plans to change the rules.

But I'm still thinking: a lot can happen in just a 100th of a second.

Huezeler breaks it down in terms of the distance a speeding downhill skier could cover with that tiny amount of time.

So was one skier ahead of the other?

It turns out that Omega timed the event to the 10,000th of a second. But they didn't release the data, even to the FIS. So somebody just might have been ahead. We'll never know.

But you'd think a man like Huezeler, a man who has been the chief timekeeper at 16 Olympics, would be bothered by such lack of precision.

He thinks there's nothing wrong with sticking to the rules as they are.

"If they are precise, the same time, each one merits a gold medal or a silver medal,” he says. “That's correct."

Timing isn't the only topic of conversation at the Olympics. In fact, all anyone seems to talk about is the weather. The hastage #colderthansochi has popped up on Twitter. And judging from the Storify below and the snowflakes falling outside The World studios right now: Boston is #colderthansochi.