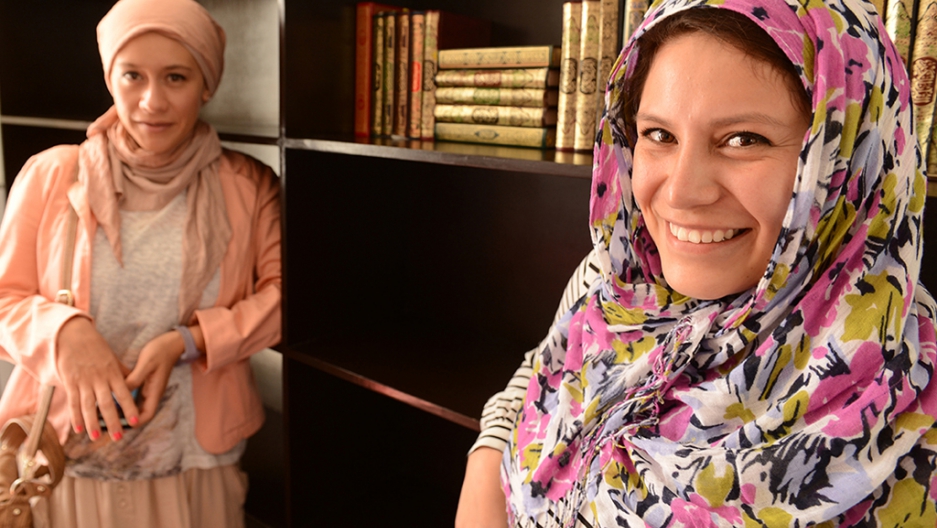 MEXICO CITY — For almost five centuries Catholicism has been the dominant religion in Mexico.

In 1970, Catholics comprised 96.7 percent of Mexico’s population. By 2010, that number had fallen to 82.7 percent, according to the Pew Research Center. Most of this change is attributed to growth in other Christian denominations. Evangelicals, Protestants and Jehovah’s Witnesses now account for 8 percent of Mexicans who identify with a religion.

Why are some Mexicans leaving the Catholic Church and converting?

The reasons are as diverse as the population. Some question Catholic doctrine and the concept of the Trinity — three Gods in one, Father, Son and Holy Spirit — as opposed to one God in Islam. Others express disgust in ongoing allegations of sex scandals and pederasty that have plagued the church in the past decade. Still others say they want to have a better understanding of Islam.

Martha Alamilla, 23, was born and raised in a Catholic family. Alamilla has always believed in a higher power but, she said, when she began to question some of the principles of the church, she found the answers proffered unsatisfactory.

“There was never a doubt in my mind that God existed,” she said one Friday following prayers at the mosque, “but there were always things that I would ask about my religion that didn’t make sense to me. I always got answers like, ‘well, because,’ and ‘it’s God and God is that way,’ and ‘because God said it was that way.’”

For Alamilla, who has a degree in industrial robotic engineering, these answers only drove her from the church in search of better answers.

Alamilla said that her original perception of Islam was one of terrorism and oppression, but in the course of studying the Koran and meeting Muslims, she discovered a belief system that answers the questions she has been asking.

“I realized it’s a beautiful religion. Everything about it makes sense,” Alamilla said. “There’s an answer to every single question the I’ve ever had in the Koran or in the Sunna.”

After studying Islam for six months, Alamilla officially converted in a ceremony called the Shahada, during which a person professes before two Muslim witnesses that, “There is no god but God and Muhammad is the prophet of God.”

Alamilla said that one of the most common misunderstandings about Islam is that the women are oppressed, aren’t allowed to express themselves and are forced to wear veils or cover themselves. In the course of her studies Alamilla said the she learned that wearing a veil or hijab is optional.

“Every single Muslim I’ve met is a wonderful person,” she said. “Not because they were necessarily born that way but because religion makes then that way.”

Alamilla has embraced her new faith, but revealing her decision to her Catholic family is another story. Her mother and brother know that she has been studying Islam, but she said she is not ready to tell them of her conversion.

“I want to prove to them first with my actions that I’ve changed as a person,” she said. “When I tell them that I’ve converted I want them to see that I’m still the same person but trying to be better.”

Standing off to the side, listening to Martha Alamilla describe her change of faith was Leslie Camarillo.

Camarillo faced a similar loss of faith in the Catholic Church and has been a practicing Muslim for three years. Camarillo said that from the time she was a child she questioned the doctrine of the church.

“I found a hypocrisy about the church when I was a child,” Camarillo said. “Every time I saw figures of fire and flames I was scared and afraid of God.”

Part of the hypocrisy could be found in the concept of the Trinity, she said.

“About this Trinity. How come God is so magnificent that he would want to be human and make himself die but still be immortal in heaven?” she asked rhetorically.

Camarillo doesn’t shy from sharing her personal search for a faith to believe in. Like Alamilla, she grew up in a Catholic household.

“I tried many religions. Hinduism, Buddhism, Christianity and many others,” she said. “I had a personal life that was like very liberal. I tried many drugs and stuff. It isn’t a bad thing for me because now I know what is good and what is wrong. … I promised myself that once I found a religion that truly answered all my questions without doubt, I will embrace it.”

Camarillo said she sees in Islam lessons she can share with others who are searching for something to believe in.

“I can advise other guys or girls who are searching around,” Camarillo said. “The main thing is that your connection with God is unique.”

According to a paper published in 2011 by Camila Pastor de Maria y Campos, a research professor at the Centro de Investigacion y Docencia Economicas in Mexico City, there are additional reasons some Mexicans are converting to Islam. In her report, “To be a new Muslim in Mexico: the political economy of the faith,”Campos writes that Islam offers a mark of cosmopolitan distinction for some converts, and the wearing of a hijab is considered fashionable by women.

Said Louahabi has lived in Mexico City for over 20 years and has witnessed first hand the Islam’s growing appeal in Mexico. Louahabi is a multilingual Morrocan national who runs his own language school and at other times works as a translator. He serves as the president of the education center of the Muslim community mosque.

Louahabi recalls a time, in the 1990s, when Mexico’s Islamic community was too small to merit a mosque of even this size. It was a time when most of the Muslims were diplomats and businessman stationed in the capital city.

The Islamic community was made up of “very few local people, mostly foreigners,” Louahabi said. “We were about 80 people, because, honestly, they didn’t know about Islam.”

Louahabi estimates that the there were about 80 Muslims when he came to Mexico City in 1994.

“It took me two months, three months to find a Muslim when I first came to Mexico,” he said.

Today, being a Muslim in Mexico is a wholly different environment, he said.

“Now, the majority are Mexican,” he said. “God brings them. It’s very hard to say why we have become very successful at this time. Almost every Friday we are having people who are embracing Islam. Sometimes five in one Friday.”

Louahabi said that women in Mexico seem to exhibit more interest in Islam than men.

When asked why this is, he responded, “ they [women] have a lot of questions and a lot of doubts that priests from other religions could not answer.”

This reporting was made possible through a fellowship funded by the Luce Foundation and administered by the International Center for Journalists.