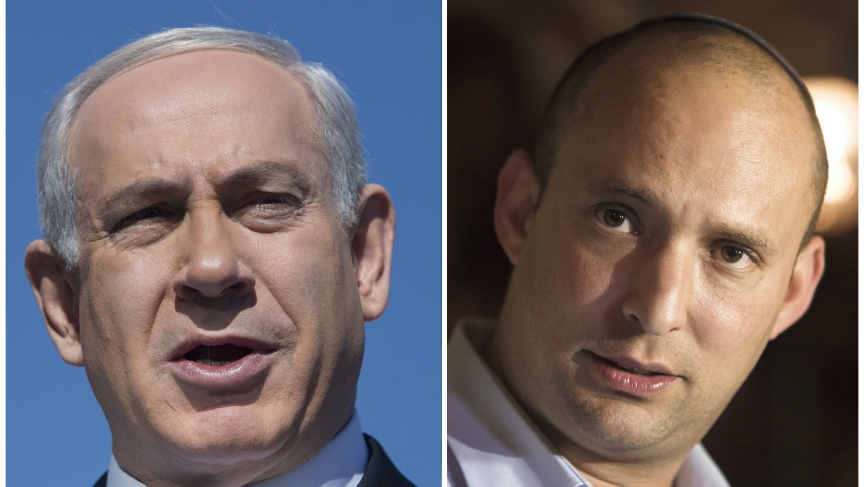 There is a big decision coming up for Israel’s leadership: how to move forward with Secretary of State John Kerry’s plan to establish a Palestinian state.

One major hurdle is that Israeli ministers who sit in the same ruling coalition hold diametrically opposing views on matters of war and peace.

Israeli lawmakers from across the political divide throw insults at each other all the time, but what’s happening these days is different. Ministers from within the governing coalition are attacking each other — very publicly, and mostly about the peace process.

A lawmaker in parliament this week rattled off a list of recent insults between ministers. When the foreign minister said that the unity of the nation is more important than keeping the West Bank, Economy Minister Naftali Bennett accused him of flip-flopping, and of being a lefty — a double insult.

Then there was Thursday’s brouhaha. European Union Parliament President Martin Schulz gave a speech in German in Israel’s parliament, and questioned whether Israel was denying Palestinians access to much-needed water.

That notion is touted by some in Israel, but certainly not all. Naftali Bennett’s hardline party stormed out of the Israeli parliament, the Knesset, midway through the speech.

“When we are spat upon and lies are told, I will not shut up, ever,” Bennett said.

“We remain with our agenda, and we promote it, and we are not afraid,” said Yoni Shetboun, a lawmaker in the economy minister’s pro-settler party, called Jewish Home.

It’s one thing for the Jewish Home party to protest world figures like the EU Parliament president for comments on Palestinians. But the party is in the prime minister’s cabinet and criticizing its own political partners, the prime minister included.

Shetboun says he doesn’t want Americans to get the wrong impression.

“I think when the citizens in the United States will hear [this, they will] think that the Jewish Home is the extremist party. No!” said Shetboun. “My role is to defend our interests. The Palestinian state is not the solution for our conflict.”

If Shetboun’s party doesn’t believe in negotiating the creation of a Palestinian state on land Israel occupies — which is what his own coalition partners are doing right now — why doesn’t his party leave the coalition? The answer: to be a thorn in the prime minister’s side.

“Our role, it’s to maintain Netanyahu on the right side of the political map of Israel,” said Shetboun. That is, to make sure Prime Minister Benjamin Netanyahu does not sign a deal for a Palestinian state.

This is a most unusual governing coalition. Normally, coalitions “are relatively cohesive on one issue, and it’s usually the Palestinian issue that you’ll have all doves or all hardliners together with some centrists,” said Gil Hoffman, chief political correspondent for the Jerusalem Post.

There is something that coalition partners are working on together, said Hoffman: a law, expected to pass soon, that requires asking the Israeli public whether to give up land for a Palestinian state.

“Then it would be brought to a referendum,” Hoffman said. “A referendum which is a political tool of a coward, that says, ‘I don’t want to decide. People, you decide. Fine, you elected me, so what? You decide.’ Then if the people say, 'yes,' which all polls say they would, it could very well be that Bennett or others will say, ‘I’m going to argue with the people?’”