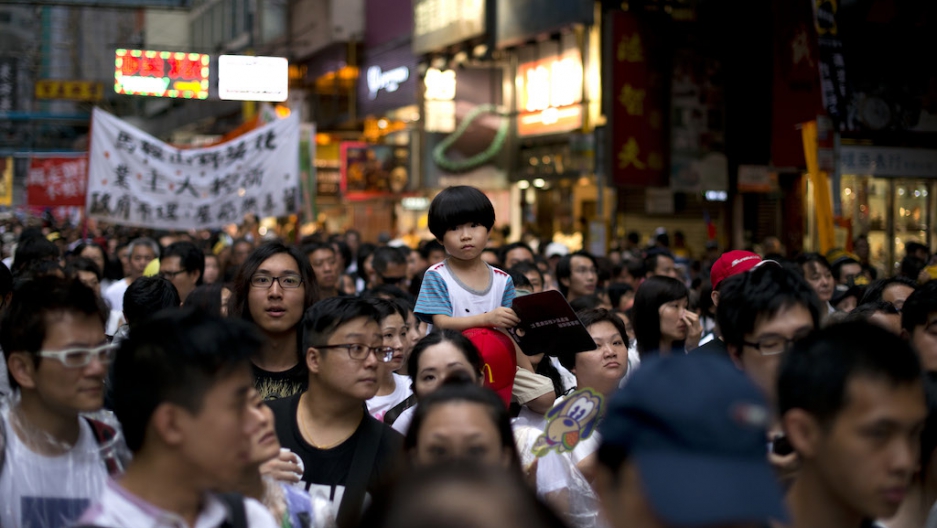 Protesters rally for democracy in Hong Kong on July 1, 2013, the 16th anniversary of the Hong Kong Special Administrative Region (HKSAR). Tens of thousands of protesters marched through torrential rain chanting slogans demanding universal suffrage. In the coming months, Beijing will decide whether to grant it.
Credit: Alex Ogle
Share

HONG KONG — Few Americans may realize it, but the Communist Party of China is on the verge of allowing some sort of democracy to take root in Chinese soil.

Not within the People’s Republic, of course, but in the Chinese territory of Hong Kong.

This year, Chinese authorities will decide for the first time how to implement universal suffrage, in the election of Hong Kong’s chief executive.

The poll won’t actually happen until 2017, when the current chief executive’s term is up. But the next few months are especially crucial for hashing out how these elections will unfold.

In December, the Hong Kong government launched a five month consultation period, during which the public can offer suggestions on the election. Matters to be debated include to what extent Beijing will de facto control who gets to run.

The Communist Party will no doubt craft Hong Kong’s democracy with an eye to maintaining its own grip on power across the Middle Kingdom. Still, Hong Kong’s election poses a complex quandary: shackling the territory’s democracy could pose as much risk to Beijing as agreeing to a truly free vote.

So the question is what level of democracy will Beijing allow?

While Hong Kong is a semi-autonomous city that has a separate political system from the mainland, the creation of a successful democracy within China could set a precedent for future political reforms.

“The real challenge for a Leninist regime is [whether it’s] willing to consider abandoning full control,” says Joseph Cheng, professor of politics at the City University of Hong Kong.

“That is to say, the election may return a candidate not acceptable to Beijing, not selected by Beijing. This is the real challenge, and the final decision to be made by the top Chinese leadership.”

China pays frequent lip service to democracy. Variations on the word "democratic" appear 14 times in the Chinese constitution. In the document’s preamble, the government declares it a long-term goal to make China “step by step” into a “socialist country that is ... democratic and culturally advanced."

Earlier this year even the hard-line state-run Global Times newspaper admitted that China was eventually headed toward “democracy in a real sense.”

So far, the struggle in Hong Kong shows how anxious the party is about loosening the reins of power.

Last year, one Chinese official asserted that Hong Kong nominees would have to “love China,” and “must not confront Beijing” in order to stand for election. Pro-Beijing legislators have suggested that the nominating committee may screen out candidates from the pro-democracy camp. Mild remarks by US and UK officials in support of universal suffrage were met with shrill denunciations from China and accusations of “insidious purposes.”

At the same time, Beijing knows that the consequences of failing to deliver real democracy in Hong Kong could ripple far beyond the city. Democratic activists have threatened to blockade the territory’s central business district, effectively paralyzing the Asian headquarters of dozens of multinational banks and corporations. Advocates argue that without democracy, opponents and dissatisfied citizens would render the territory nearly ungovernable.

Many Taiwanese also view the election as a test of China, which has long sought to convince or compel the island democracy of 23 million to unify with the mainland.

Hong Kong is widely seen as a proof of concept for a possible Taiwanese future under Beijing’s governance. Any sign of heavy-handed Communist Party meddling could dash hopes of a willing reunion.

Yet none of that seems likely to persuade China’s leaders to tolerate free elections.

In the year since Chairman Xi Jinping took power, political reform has stalled or even reversed. Xi has overseen a crackdown on liberal online commentators on the mainland, and on lawyers who call for greater civil liberties.

Even if China doesn’t resort to such extreme measures in Hong Kong, it has other ways of attempting to neutralize dissent.

“Even if the [Chinese Communist Party] and its puppet politicians in Hong Kong may describe a Beijing-controlled chief executive election as ‘by universal suffrage,’ Hong Kong people need to be aware that such an election is worse than none at all.”