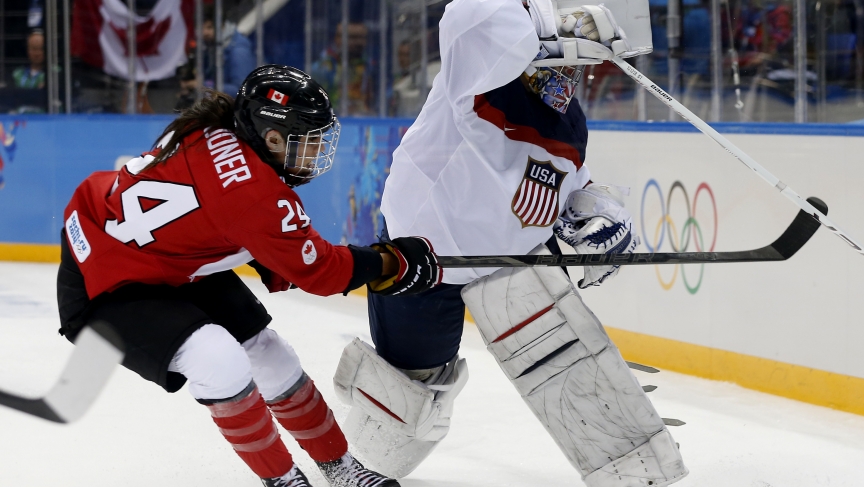 Anybody else doesn't stand a chance.

That's a good metaphor for women's ice hockey at the Olympics.

The big beasts are Canada and the US. And there's bad blood between them.

Today in Sochi, the Canadian women beat the US 3-2. But it was just a preliminary match. Both teams remain alive in the battle for gold and silver.

“In the early days, the only teams to play were the other ones,” he says. “The Canadians really only had the Americans as serious competition.”

You know the expression "familiarity breeds contempt"? Well, the two teams talk trash to each other and hit hard. And this contempt started way before the Olympics. As Dowbiggin tells it, the athletes grew up playing against each other in youth leagues. That continues in college, as many Canadians head to the US on hockey scholarships. And it continues at the world championships, only to peak every four years at the Olympics.

“For women’s hockey, the Olympics are the 'game seven of the World Series' every time they play,” he says. “It has that kind of magnitude.”

The US team is still smarting from a loss in the gold medal game in Vancouver back in 2010. It’s been locker room motivation. In run-up games to the Sochi Olympics, the US team has whupped the Canadians.

But that didn’t happen today, so it’s just more salt in the US wounds.

A big reason the US team can’t seem to best the Canadians is Hayley Wickenheiser.

“She’s the Babe Ruth of women’s hockey,” says Dowbiggin. “She’s a tremendous athlete and the poster-woman of the sport.”

Wickenheiser had a goal and an assist in today’s victory.

But it’s only a preliminary game. The two teams still have a chance to meet once more in the gold medal game.

Honestly, it will be a shock if either of the two teams fails to make it to that game.

They’re that much better than the rest.