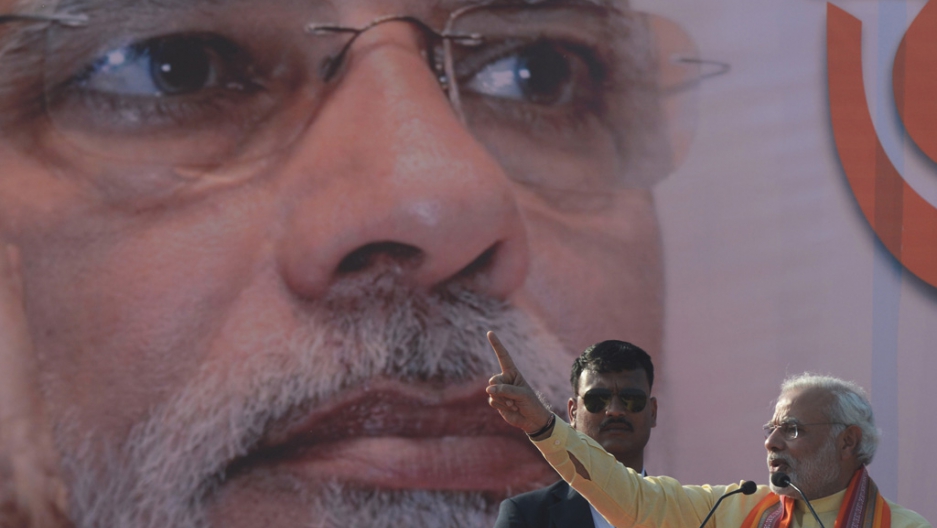 LONDON — If polls are correct — and no one in the press is contradicting them — the Bharatiya Janata Party (BJP), a Hindu nationalist party, will win the elections to the Lok Sabha, India's parliament, in May.

This is flashing warning lights for India’s Muslim minority. Modi is chief minister of Gujarat state. During his time in office Gujarat has seen more communal violence than any other part of the country. In 2002, more than 1,000 Muslims were reported killed in rioting in just three days.

Modi has been heavily criticized for failing to control the violence. Some even accuse him of fanning it. But he has also been praised for making Gujarat, once one of India’s poorest states, into a hub of the country’s new economy.

In looking at the BJP, is it more “Hindu” or “nationalist?”

They are inseparable, according to Mujibur Rehman, professor at Delhi’s Jamia Millia Central University.

“The BJP promotes majoritarianism,” he explains, “and they criticize secularism.”

India is majority Hindu, therefore its brand of nationalism and anti-secularism can’t help but be sectarian.

This view is echoed by Christophe Jaffrelot of the Indian Institute at King’s College London, and author of several books on the BJP. Jaffrelot summarizes the party’s view, “Within the Indian nation there is a Hindu majority that epitomizes the national culture. Muslims and Christians can remain Muslims and Christians in the private sphere but the moment it comes to the public space Hinduism must prevail."

The party sends out mixed messages. On one level it sounds like a typical right-wing party in the West. It supports free markets, attacks secularism, mocks multiculturalism and promotes a pious view of the nuclear family. It is hawkish in its foreign policy views, particularly on the dispute with Pakistan over the Muslim territories of Jammu and Kashmir.

Still, the BJP claims to be inclusive. Several prominent Muslims support the party and will be candidates for election in May.

At the same time, Rehman points out, “They say Muslims are more interested in Islam than they are in India. That they are not good citizens.”

Muslims’ minority status in India needs to be put in context. India has the third-largest Muslim population in the world with a little more than 177 million Muslim citizens. That’s almost as many Muslims as are in Pakistan.

As a religion, Hinduism isn’t particularly suited for politics. It is too fragmented by caste. “Hinduism is very heterodox,” says Rehman. “What works for Brahmins doesn’t work for Dalits (untouchables).”

Jaffrelot adds, “The core constituency is made of the urban middle class, the upper layer of society. They are upper caste and this is still an upper-caste movement.”

So how did this upper-caste movement end up behind Narendra Modi, who started out in life as a “chai wallah” — someone who sold tea at the bus station in his hometown?

First, Modi is a very compelling performer, as I witnessed in Patna, India recently.

He has an economic record in Gujarat to run on. But there are deeper reasons for his rise. The Congress Party, which has ruled India for most of its history, is seen as a deeply corrupt, family enterprise. The family in question is the Nehru-Gandhis, considered a political dynasty now in its fifth generation.

Many Indians, particularly those of the new entrepreneurial middle class, are fed up with corruption and state control of enterprises.

And there is another reason. Like just about everywhere else in the world, over the last two decades India has become an urbanized society.

This has had a huge effect on Hindus and the large Muslim minority.

“Urbanization has transformed Hinduism more than any other development,” says Jaffrelot. “In the village you live together. You can’t miss the muezzin or the bells of the temple and you have syncretic (mixed) cults. For example Hindus will go to Sufi places for healing. … When you go to the city that’s over.”

In the city, people are isolated in their apartments and in their cars on the way to work. They stick with their own kind. The effect on voting patterns in Modi’s home state of Gujarat is clear, Jaffrelot says. “Congress won the village vote overwhelmingly. But now 44 percent of Gujarat is urban and Modi dominated there.”

In Gujarat, Muslims are self-ghettoizing. These ghettos aren’t slums, but places where people of all economic strata feel safe.

Jaffrelot says Juhapura, a neighborhood in Ahmedabad, Gujarat’s largest city, is a prime example. Half a million Muslims have moved into the area in recent decades as a result of sectarian violence.

The irony is that Ahmedabad is the city where Mahatma Gandhi had his ashram. He worked tirelessly to prevent sectarian violence. The ashram is now a museum across the river from Juhapura.

With three months to go until voting day, campaigning is well underway. While the Congress Party continues to flounder, Modi has taken charge of framing all the issues. He has even figured out a solution to the modern candidate’s biggest dilemma: how to be in several places at once.

With the help of the tech wizards who support him, he has been giving speeches by hologram — his 3D facsimile appears in several cities at once.

What happens the morning after the election is anyone’s guess. India has a parliamentary system of government. Most prime ministers have to form a coalition with other parties to get a majority.

The last time the BJP won an election, in 1998, its first coalition was so shaky that the parliament was dissolved in less than two years and new elections were held.

“Indian politics is deeply fragmented. Coalition politics is the only game in town. I don’t think he has the potential to form a government on his own,” Says Rehman.

But Modi is the man of the moment, and India’s religious minorities are going to have to deal with it.

More from GlobalPost: Bombing in India may be related to religious, sectarian divisions