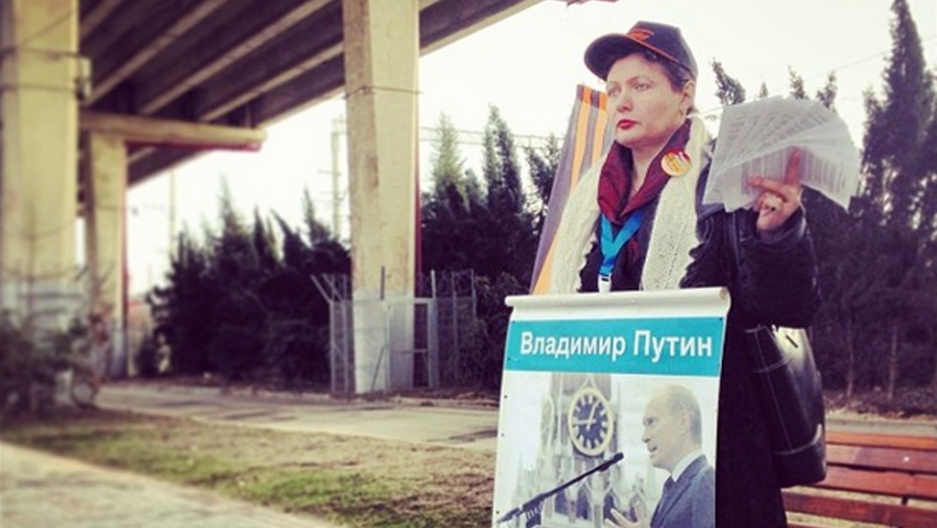 KHOSTA, Russia — Hidden under a highway overpass in this rustic Sochi suburb miles away from any Olympics venue, the Sochi Games’ specially designated “protest zone” is the last place any out-of-towners would look.

For Russian officials, it was a convenient way of appeasing international pressure over the country’s dismal record on free speech. To critics, it was the shortest of olive branches.

Either way, few took it seriously.

On Tuesday afternoon, the stone-faced 48-year-old stood alone and determined in this leafy, nondescript park nestled next to train tracks, exercising her civic right amid the clacking of train cars and whizzing of traffic.

She had no stage, no loudspeaker and no audience — just a placard, some pamphlets and her convictions.

“We are fighting for our motherland and our sovereignty,” she said, the wash of bus engines overpowering her soft voice. “I’ve joined a war and my responsibility is to get the word out to every citizen I meet.”

Rather, it’s against the American stranglehold her organization — the conservative National Liberation Movement — says has gripped Russia and exploited its resources.

Shelkovskaya says she’s actually quite happy with the Olympics.

“I’m glad our president, Vladimir Vladimirovich Putin, is doing everything he can for our Motherland, for her sovereignty and her people,” she said, using his patronymic, a respectful form of address, and proudly clutching a placard emblazoned with his image.

This probably isn’t what officials had in mind when they created the protest zone after months of growing international criticism about human rights and free speech during the lead-up to the games.

Putin’s ban on protests in Sochi, part of his decree on the region’s tight security regime, prompted an outcry from the International Olympic Committee (IOC). When Russian officials responded by creating the space, the IOC seemed satisfied.

However, critics universally panned the move, which they saw as a hollow, cursory overture to the Western criticism Russian officials have long detested.

There's a darker side: given the recent official harassment of local campaigners, few true critics are lining up to use the space. On Wednesday, Yevgeny Vitishko, an outspoken environmental activist here, was sentenced to three years in prison for spray painting on a wall.

The zone — also known as the “50 Years of Victory in the Great Patriotic War Park,” as Russians call WWII — is a negligible swath of land where few foreign visitors are likely to roam.

Far from any major tourist attraction, it sits next to a quiet promenade where vendors hawk cheap clothes, tacky souvenirs and barbecued meat.

What’s more, prospective protesters are required to secure official permits from the local city administration. The few Kremlin critics who say they've done so say their applications were denied.

A local branch of the Communist Party reportedly did manage to stage a demonstration here earlier this month, but even then it was begrudgingly.

But Shelkovskaya — a stern, dark-haired woman who has the air of a displeased substitute teacher — sees few problems with playing by the book.

She applied to city hall for a permit three days ago, shortly after arriving from her native St. Petersburg, and was granted permission for Tuesday — 3 p.m. on the dot.

“Wherever the administration tells me to go, that’s where I go,” she said. “I’m not about to break any laws.”

So there she stood, handing out pamphlets to disinterested passersby, agitating against Western “colonialism” and calling for a sweeping renationalization of the country’s financial assets, much of which sit abroad in offshore accounts.

Hers is the same conservative, ultrapatriotic rhetoric Putin himself has employed since returning to the presidency in 2012.

She recently picketed the US consulate in St. Petersburg over Washington’s perceived meddling in Ukraine’s protracted political crisis.

The protest zone, however, is hardly the US consulate. Save for the highway commotion, silence hangs in the balmy air. Men chat casually on the benches as young mothers stroll by with their children.

If there were some joke, Shelkovskaya clearly wasn’t in on it.

“I have no complaints, I’m glad I’m standing here,” she said.

But while Shelkovskaya considers her activism a full-time job, it hasn’t been all business for the diehard patriot, whose blue Olympics spectator pass dangled around her neck.

“They’ll be big prizewinners,” she said confidently. “We’ll make it into the top three.”