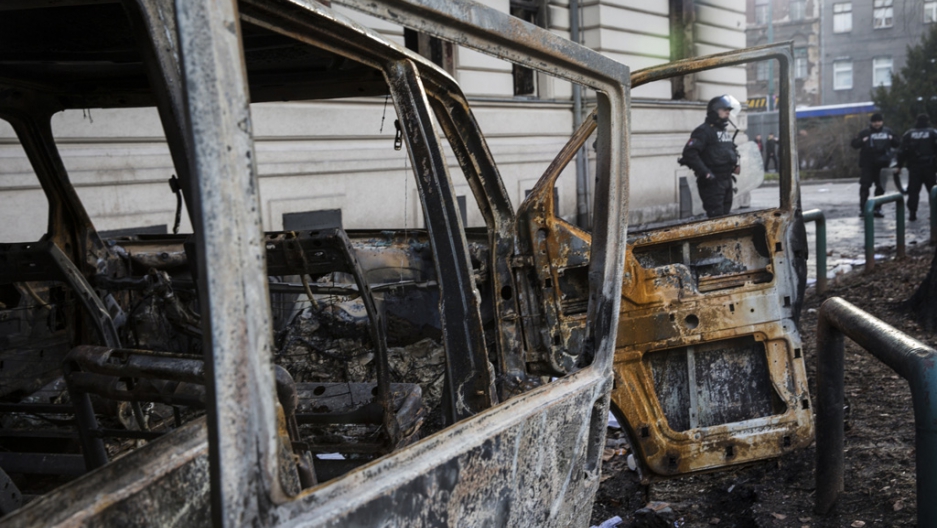 SARAJEVO, Bosnia — Bosnians were in a state of shock as they examined burned government buildings, overturned cars and destroyed bus stops in the capital this weekend.

The country’s largest protests in two decades started last week in the factory town of Tuzla, where 10,000 laid off factory workers expressed outrage over the government’s handling of privatized industries. Some have complained about two years of unpaid wages.

The unrest quickly spread to the capital, marking a turning point for a country that in the 1990s suffered the worst conflict in Europe since World War II.

For more than a week, workers and pensioners, students and the unemployed have gathered daily. Police used tear gas and rubber bullets to disperse protesters. In one video from Friday, police are seen beating protesters with batons, driving them off a main road and down a steep embankment.

More than 40 people were arrested and more than 100 injured.

Every day this week in Sarajevo, more than 1000 activists have gathered daily chanting “Thieves! Resign!”

They block intersections and intimidate drivers who try to cross their human barricades.

Nearly 20 years since the Dayton Peace accords ended the 1992 — 1995 civil war between Serbs, Croats and Muslims, Bosnians have been saddled with an unwieldy power-sharing political system that’s made governing very highly complicated.

“The people are really desperate,” she says.

Another protester, Merisha, a 30-year old pharmacist, lived through the siege of Sarajevo between 1992 and 1995. She says that her father, a war veteran, saw his pension cut in half.

"We've been waiting for this kind of uprising for twenty years,” she says.

But others expressed anger at the protests’ violence, asking why Bosnians attacked public property and destroyed a valuable archive.

Emir Hodzic, a leading human rights activist explains how unemployment, low pensions and the lack of prospects are fueling the protests.

“If you put those things together you get dangerous mix, a people’s Molotov cocktail."

Protesters say they will meet soon to create a united platform.

On Wednesday night, hundreds of people packed into a Sarajevo University cafe to voice their ideas.

After the meeting ended with no clear way forward, Leyla, 39, said, “It’s difficult to manage a grassroots organization against such a heavy top down administration.” She declined to provide her last name.