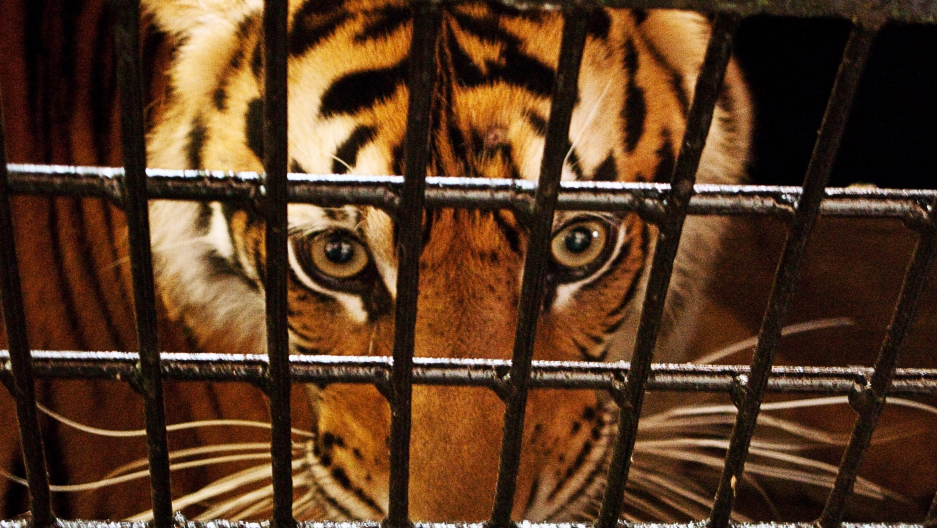 An endangered five-year old Sumatran tiger is placed in a transport cage in Banda Aceh on April 26, 2010 to be relocated to a safari park in Jakarta.
Credit: Chaideer Mahyuddin
Share

NAIROBI, Kenya — The British government is holding an international conference in London Wednesday and Thursday on the illegal wildlife trade, aimed at protecting endangered species and ending an illicit business that threatens security and the environment.

Among the worst affected species are Africa's elephants and rhinos, as their ivory and horns are trafficked to the markets of China and the Far East.

Here's what you need to know about the illegal wildlife trade, in numbers and pictures:

An illegal ivory stockpile is burned at the Tsavo National Park in Kenya. (Tony Karumba/AFP/Getty Images)

10 million: amount in dollars earmarked by the US government for training and supporting wildlife rangers in sub-Saharan Africa (Source: US government)

Kenyan poacher turned gamekeeper Kuyaso Lokoloi (2nd R), 25, patrols with his peers through part of a conservancy in Laikipia, approximately 250 kms north of the capital Nairobi, in search of poachers. (Tony Karumba/AFP/Getty Images)

230,000: amount in dollars a Chinese man was fined by a Kenyan court last month after being caught with an elephant tusk in his suitcase. Heavier fines are part of Kenya's new Wildlife Conservation and Management Act (Source: Daily Nation)

A raw piece of elephant ivory is exhibited in a Nairobi court during the trial of Tang Yong Jian. (Tony Karumba/AFP/Getty Images)

60,000: the dollar price per kilo of rhino horn (Source: CITES, the Convention on International Trade in Endangered Species of Wild Fauna and Flora)

A black dehorned rhinoceros is followed by a calf at the Bona Bona Game Reseve in South Africa. (Stephane de Sakutin/AFP/Getty Images)

Yao Ming, Wild Aid Ambassador and China's retired NBA star, looks at the carcass of an elephant in Samburu, Kenya, while in the country to film a feature-length documentary called “The End of the Wild.” (Simon Maina/AFP/Getty Images)

3,200: number of remaining tigers in the wild (Source: TRAFFIC)

An endangered five-year old Sumatran tiger is placed in a transport cage in Banda Aceh on April 26, 2010 to be relocated to a safari park in Jakarta.

2,200: the dollar value of a single kilo of elephant ivory (Source: US Government)

Ivory ornaments during an event involving the public destruction of ivory ahead of the international conference on the illegal trade in wildlife. (Carl Court/AFP/Getty Images)

100: estimated number of elephants killed every day of the year in Africa (Source: UK government)

An excavator removes the carcass of an elephant after it was killed by poachers at Kothalguri village in India. (AFP/Getty Images)

50: number of years before elephants are locally extinct in some parts of Africa (Source: World Wildlife Fund)

An aerial picture shows the main herd of elephants in Zakouma National Park, 800 kms east of N'Djamena in Chad. 90 percent of the elephants of the park have been poached in the last decade. (Michael Lorentz/AFP/Getty Images)

6: number of tonnes of illegal ivory destroyed by Chinese authorities in the first such public ceremony last month (Source: BBC)

Piles of ivory wait to be crushed during a public event in China in January 2014. (AFP/Getty Images)

A view of Windhoek, capital of Namibia, where a legal auction of seven tons of elephant tusks was held in 2008. (aj82/Flickr)

An American conservation student plays with a four-month-old black baby rhino at South Africa's Entabeni Safari Conservancy. Entabeni is one of the world's only dedicated orphanages for rhino calves whose parents were poached for their horns.(Stephane de Sakutin/AFP/Getty Images)