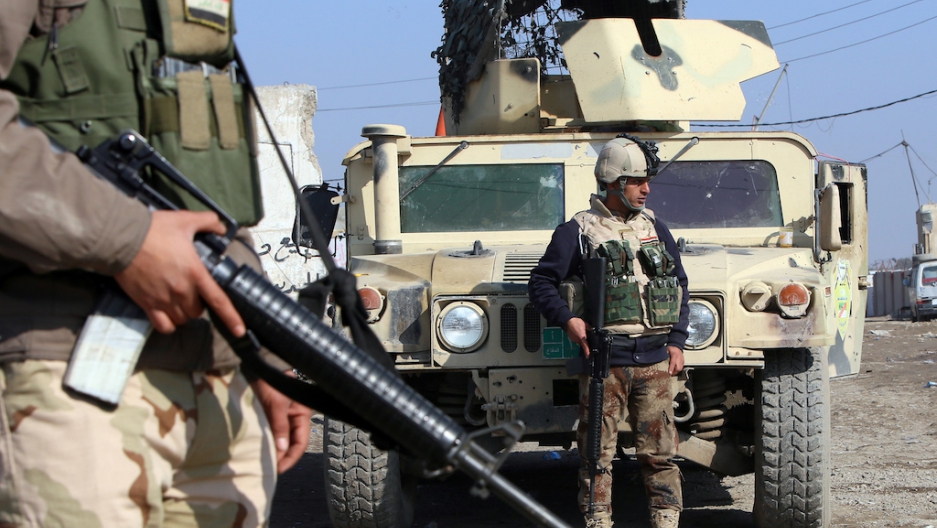 The United States is stepping up the delivery of military equipment to Iraq as violence in the country escalates once again.

More than 1,000 people were killed in January, in the worst violence in nearly six years. Now, Iraqi security forces and pro-government tribesmen are fighting Al Qaeda-linked militant groups in the same cities that saw some of the highest casualties among US troops during the Iraq war.

But their efforts have been hampered by their lack of expertise and equipment, prompting Iraqi Prime Minister Nouri al-Maliki in October to issue a desperate plea to the United States for more military assistance.

“It has been almost two years since American troops withdrew from Iraq. And despite the terrorist threats we face, we are not asking for American boots on the ground,” al-Maliki wrote in an opinion piece published in The New York Times.

“Rather, we urgently want to equip our own forces with the weapons they need to fight terrorism, including helicopters and other military aircraft so that we can secure our borders and protect our people. Hard as it is to believe, Iraq doesn’t have a single fighter jet to protect its airspace.”

Since 2005, the US government has delivered more than $14 billion in equipment, services and training to Iraq — and now more is on the way.

The White House spokesman Jay Carney said last month the US would accelerate deliveries of missiles and surveillance drones to Iraq.

"We're working closely with the Iraqis to develop a holistic strategy to isolate the Al Qaeda-affiliated groups and we have seen some early successes in Ramadi," Carney said, mentioning one of the two key cities in Anbar province. The other is Fallujah.

"This situation remains fluid and it's too early to tell or make conclusions about it. But we're accelerating our foreign military sales deliveries."

Here's a look at the growing list of equipment the US has delivered — or is about to send — to Iraq.

The United States delivered 75 Hellfire missiles to Iraq in December. Another 100 are due to arrive in the spring. Hundreds more are in the pipeline.

The air-to-surface missiles, produced by Lockheed Martin, are designed to destroy armored vehicles and can be deployed from aircraft, ships and land.

A ScanEagle drone is launched during a demonstration. (Jim Watson/AFP)

The United States is scheduled to deliver 10 ScanEagle unmanned aerial vehicles (UAV) to Iraq in the next couple months.

The unarmed ScanEagle, made by Boeing Insitu, a subsidiary of Boeing, is launched from a catapult and is the smaller cousin of the more capable Predator drone that used to fly over Iraq.

With a wingspan of more than 10 feet and maximum speed of 80 knots, the ScanEagle is used for observation and reconnaissance missions.

A US soldier launching a Raven drone in the southern Afghan province of Kandahar. (Tony Karumba/AFP)

Forty-eight unarmed Ravens are due to arrive in Iraq this spring.

The hand-launched drone made by AeroVironment has a wingspan of 4.5 feet and is used for low-altitude observation and reconnaissance missions.

A US-built P301 patrol boat at the Umm Qasr Naval Base. (Ahmad Al-Rubaye/AFP)

In the past year, the United States has delivered 12 P301 coastal patrol boats to the Iraqi navy.

The 115-foot boats, built by Swiftships, are being used to beef up security in the country's territorial waters and defend offshore oil platforms.

An Iraqi soldier stands on top of an M1A1 tank. (Ali Al-Saadi/AFP)

In recent years, Iraqi security forces have received 140 M1A1 Abrams tanks, the main battle tank of the US Army.

Named after the late General Creighton W. Abrams, the US commander in Vietnam, the M1A1 made by General Dynamics is heavily armored and weighs close to 70 tons.

A C-130 Hercules aircraft taxis across the runway. (AFP)

In the past year, the US has supplied Iraq with six C-130J Super Hercules aircraft.

The four-engine military workhorse, made by Lockheed Martin, is used to transport troops and cargo to some of the most hostile environments on the planet, as well as carry out medical evacuation missions during wars and natural disasters.

The Pentagon's Defense Security Cooperation Agency (DSCA), which oversees foreign military sales and training, told Congress last month of its plan to sell 24 Boeing AH64-E Apache Longbow attack helicopters to Iraq, along with another 480 Hellfire missiles and associated radar and navigation systems in a deal worth $4.8 billion.

The Senate Foreign Relations Committee, which had been blocking a long-term transfer to Iraq over concerns that the helicopters could be used in internal crackdowns, finally signed off on the sale in January.

The last two items on this list are proposed sales, which means they have not yet been approved.

In August 2013, the DSCA told Congress it wanted to sell $2.4 billion worth of equipment to Iraq, including 681 Stinger anti-aircraft weapons, 13 Sentinel radars and three Hawk anti-aircraft batteries.

The Stinger, made by Raytheon Missile Systems, is light and portable and is used to fire on aircraft by soldiers on the ground.

The makers of the Bell 412EP helicopters claim the aircraft is ideal for “extreme conditions” — which it is likely to face in Iraq. Its 220-cubic-feet cabin makes it a good people or cargo carrier.