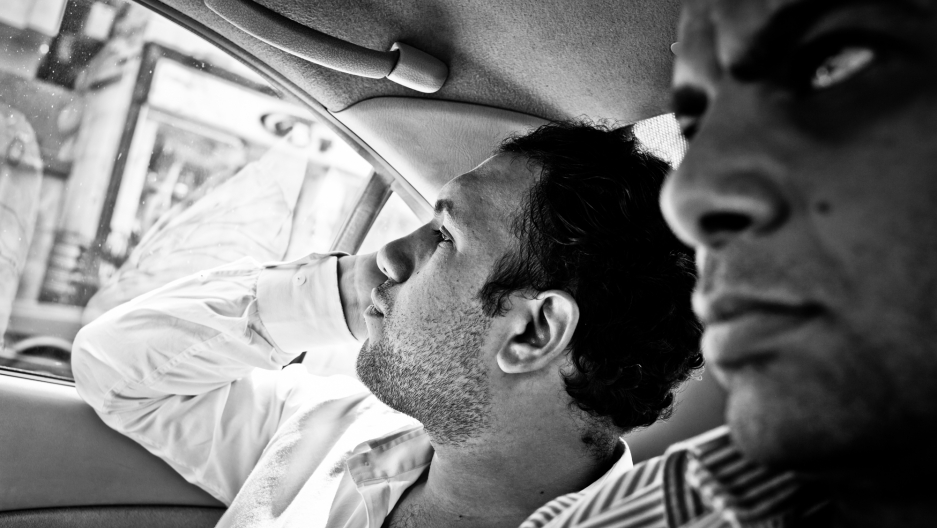 BOSTON – Mohammad Abbas looked out over Boston Harbor and saw the history of the American Revolution.

On a cold, clear day last week, he gazed at the white spire of Old North Church, where in 1775 two lanterns signaled the arrival of British troops by sea, and beyond that Abbas spotted the Bunker Hill Monument where the revolutionary militias were told, “Don’t shoot until you see the whites of their eyes.”

Abbas is one of the youth leaders from Egypt’s massive street protests in Tahrir Square that toppled President Hosni Mubarak exactly three years ago. Abbas has lived history in his own country, and so he couldn’t help but ponder the meaning of it all when he visited GlobalPost headquarters overlooking Boston’s historic waterfront.

“Your revolution took 13 years. Our revolution is only three years old… And right now it is very hard to see that ours is still a revolution, but it is. Revolution, real revolution, takes time. This is not over yet,” he said, looking out the window of my office.

I first met Abbas in the heady and hopeful days of early 2011 when millions of Egyptians gathered in the streets and flooded into Cairo’s Tahrir — or “Liberation” — Square, demanding the end of the corrupt and brutal 30-year rule of Mubarak’s police state.

Abbas was 25 then, a struggling employee of a printing press and a young member of the Muslim Brotherhood who came of age in one of Cairo’s vast tracts of poverty where the Brotherhood always garnered its strength.

He was emerging as one of the more effective organizers of the square and became a member of what was known as the Revolutionary Youth Council. They were a group of about 15 young people who led different factions of the protest movement. The council took up quarters in what would become a signature green, eight-man camping tent that was erected at the center of a ramshackle tent city in which protesters camped out during the 18-day uprising that began Jan. 25 and ended Feb. 11 with the stunning news of Mubarak stepping down and ultimately jailed while he awaited trial.

The members of this Revolutionary Youth Council were secular and religious, Muslim and Christian, men and women, labor activists and well-dressed professionals, and they were all determined to see their popular uprising succeed. And it did, or at least, it seemed so as Mubarak was behind bars and an interim government was established by the Egyptian military.

Abbas became a central figure in two documentary films I have worked on in partnership with PBS FRONTLINE.

And with the award-winning FRONTLINE cameraman Tim Grucza capturing every moment, I stood next to Abbas on the night of Feb. 10, 2011 as he led hundreds of thousands of protesters in Tahrir Square in a thundering chant: “The army, the people – one hand.”

It was a decisive moment. Abbas was leading the youth in calling on the army to come to the side of the protesters, and it seemed that it did indeed embrace an historic moment for Egypt to change.

The army, traditionally one of the most trusted institutions in Egypt, shepherded the country through the first free and fair elections in Egypt’s 5,000 years of history. The long-banned Islamist movement was awakened like a slumbering giant and Abbas quickly grew disillusioned with the Muslim Brotherhood’s leadership as it began to play politics and leverage its popularity into power.

He quit the Brotherhood when he saw that they would not fulfill the inclusive democracy that he and his fellow members of the Revolutionary Youth Council had envisioned, and he and others started a small party known as the Current Party, which professed a traditional religious base but an inclusive approach to governing that would not alienate minority Christians and women. They were centrists, and they were crushed at the polls in a political landscape dominated by the Brotherhood, which had more funding and more foot soldiers.

Abbas said didn’t like Morsi and didn’t like the way the party governed. He continued to protest in Tahrir Square, and then he and the other protesters watched in disbelief as the military eventually turned around and violently reasserted its authority. Then, like many Egyptians, Abbas began protesting against the military too for what he saw as an excessive use of force and an attempt to bring back the
remnants of the old regime.

By last summer, the military was carrying out what most observers viewed as a military coup. Responding to massive street protests against Morsi and his government, the military moved on July 3 to oust the democratically elected Morsi and placed him under arrest in an undisclosed location. Morsi is now facing trial.

Abbas said that he, like many of his friends from the green tent and the wider protest movement, is under threat of arrest by the Egyptian military. Abbas seems caught in a riptide of history having opposed the Brotherhood, of which he was once a member, then opposing the military, which he once believed would be the protector of a new democracy. He is on the run and fears he will be jailed if he returns to Egypt.

He said he left the country in September, flying to Doha, Qatar at the invitation of Al Jazeera television for an on-air appearance about the street violence that was unfolding in Egypt. He said he planned to return, but while he was in Qatar several of his friends back home were arrested.

Friends and family said they believed he would likely be arrested at the airport if he returned.

He landed a position at the Arab Center for Research and Political Studies in Doha and this winter saved enough money for a plane ticket to Washington.

In a whirlwind week of meetings this month, he spoke with the staff of several senior members of Congress, with officials from the US State Department’s Bureau of Democracy and Human Rights, with researchers at the Brookings Institute and with media outlets including NPR and the New York Times.

“We came to tell America that our revolution was stolen from us, that the military is locking up all of the opposition whether they are religious or liberal, it does not matter,” he said. “I think America is very confused about what has happened. After the Arab Spring, America said it was on the side of democracy. But where is America now?”

Abbas also came to the US so he could visit Harvard University’s Kennedy School of Government, which he said he has long dreamed of attending. He spoke with several of the school’s administrators and professors and sought their advice on how he might apply. And while he was in town, he stopped by GlobalPost so that I could show him my hometown and all its history after he had spent so much time showing me Cairo while history was being made.

“This is our Tahrir Square,” I told Abbas, pointing to the circle of cobblestones near the Old State House where the Boston Massacre occurred in 1770, one of the key events that ultimately ignited opposition to the British and the Revolutionary War which ended in 1783.

Abbas took in the history and then explained what he felt Tahrir Square had come to mean to him and to Egyptians.

He said, “In Tahrir, too many young people were able to get the feeling of justice, of their rights and a feel for having control over their own country. When they taste freedom, they will not accept to go back again. It will take some time, but the feeling we all had in Tahrir is not going away.”