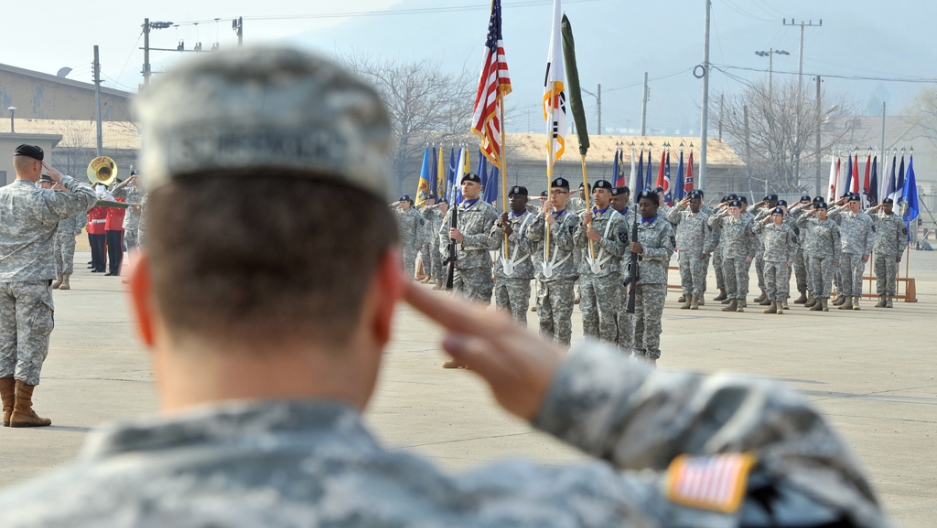 Soldiers of the US Army's 23rd Chemical Battalion salute at the national flag during a ceremony to recognize their official return to the 2nd Infantry Division located in South Korea, at Camp Stanley in Uijeongbu, north of Seoul, on April 4, 2013.
Credit: Jung Yeon-je
Share

After years of decreases, military spending is expected to rise globally for the first time in five years.

And the massive defense budgets of China and Russia are to blame.

Russia, meanwhile, is expected to spend 44 percent more on its military over the next three years — the largest increase of any country in the International Institute for Strategic Studies' latest report.

Here's a look at the 15 largest defense budgets around the world last year (2013), based on figures from the IISS report:

The United States population, according to the 2012 census, was 313.9 million people. That means the country spends roughly $2,000 per person on defense.

With China's population at roughly 1.35 billion people in 2012, the communist nation spends just $83 per person on its defense budget.

Roughly 143 million people lived in Russia as of 2012, meaning it spends around $475 per person on its military.

Saudi Arabia spends about $2,100 per person on its defense budget, according to figures that put the desert nation's 2012 population at 28.3 million people.

With Great Britain's population at an estimated 63.2 million people in 2012, it spends roughly $900 per person on defense.

France spends about $797 per person on its military budget based off its 2012 population of 65.7 million people.

Based on its 2012 population of 127.6 million people, Japan spends just under $400 per person on its military.

Germany's population of roughly 82 million people in 2012 puts its defense spending at $540 per person.

With a 2012 population of 198.7 million people, Brazil spends roughly $175 per person on its military budget.