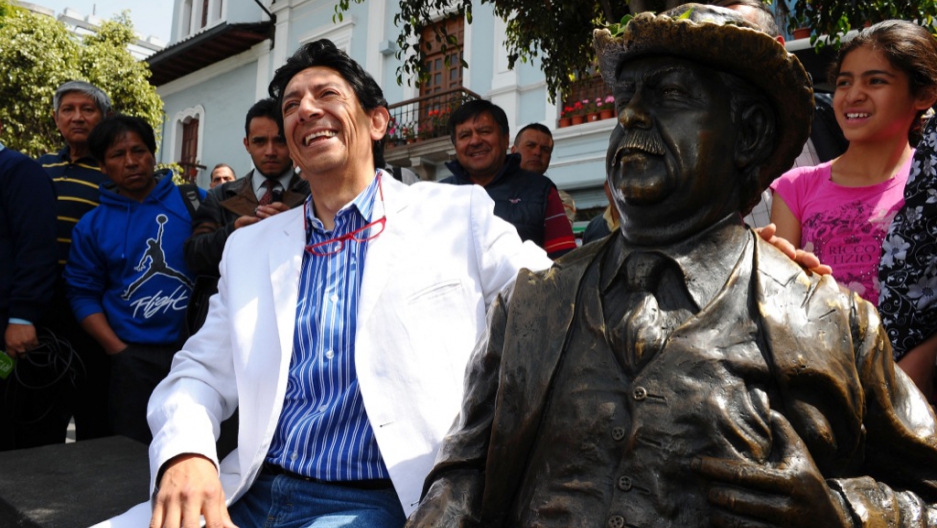 LIMA, Peru — WikiLeaks founder Julian Assange might regard Ecuador as a bastion of free speech, but try telling that to censored cartoonist Xavier Bonilla.

Bonil, as the Ecuadorean humorist is known, has become the first media worker to be sanctioned under his country’s controversial — critics say repressive — new communications law.

The Orwellian-sounding Superintendency of Information and Communication has fined his newspaper, El Universo, $93,000 and ordered it to run a correction over this political cartoon:

That’s not exactly what you’d expect from a government famous for offering refuge to freedom-of-information campaigner Assange and, at least initially, inviting US intelligence uber-leaker Edward Snowden to also apply for asylum.

The raid took place Dec. 27 after Villavicencio, who is an adviser to an opposition congressman, was charged with spying for allegedly accessing official emails without authorization.

Bonil had claimed the cartoon was based on public information, after Villavicencio’s account of the incident was widely covered in Ecuador. He also insisted that his work is artistic satire and should not be judged by the same standards as factual reporting.

But according to the Superintendency — whose rulings are final and cannot be appealed — the cartoon was culpable of “twisting the truth” and encouraging “social unrest.”

It “promotes the belief that the actions of the Chief Prosecutor’s Office [in ordering the raid on Villavicencio’s home] with the support of the police were carried out with deception … and using violence … and this effectively delegitimizes the authority’s actions,” the indictment noted.

But the government’s censors might do well to develop a sense of humor. So too might President Rafael Correa, who has made it a personal crusade to take on his country’s “ink assassins,” as he routinely labels critical journalists.

They would certainly have needed it when reading Bonil’s "correction" earlier this month.

In the Feb. 5 cartoon, dripping with sarcasm even heavier than usual, Bonil showed a delighted Villavicencio waving police into his home as though he were actually enjoying the raid.

CORRECTION Wednesday Feb. 5
Riiiing.
Who is it?

How nice … I was expecting you.

Call your lawyer.
No, don't worry, I trust you.

You're the legitimate authority … take all the equipment you need.

We'll leave a sealed envelope so as not to break the chain of custody.
Just handle the details!

Just saying that in case you think we're going to show someone this information soon.

Not to worry. I know that in your hands there will be total independence.

At one point in the sketch, Villavicencio even refuses the officers’ suggestion that he call his lawyer as they confiscate his computer and hard drives, replying: “No, don’t worry. I trust you. You are the legitimate authority. Just take them. Take everything you need.”

Whether Villavicencio is guilty or not, in most democracies no one would bat an eyelid at a cartoonist poking fun at such a high-profile political scandal.

The same cannot be said of Bonil’s persecution, which appears to be precisely the kind of Big Brother-style censorship that Assange would normally have jumped on.

Except that the WikiLeaks guru owes a serious favor to the Correa administration for approving his asylum request and sheltering him in its London embassy since June 2012.

Assange says he sought refuge there to avoid a possible extradition to the United States on sealed charges of leaking official secrets. But he’s also fighting being sent to Sweden for questioning over two alleged sexual assaults.

He has praised Ecuador as “courageous” and “independent” for standing up to Washington and London over his case, which he regards as a crucial test of freedom in the UK and the US.

Assange and WikiLeaks did not respond to GlobalPost’s requests for comment.

Bonil’s case is just the latest example of what many see as Correa’s bullying and harassing of the media.

According to Human Rights Watch and the Committee to Protect Journalists (CPJ), in the Western Hemisphere only Cuba has a worse record on press freedom than Correa's Ecuador.

A left-wing populist, the president has frequently clashed with El Universo, including in 2012 winning a criminal libel lawsuit against an op-ed writer and the editors. The sentence would have seen them jailed and fined $42 million, and it would have shuttered the newspaper. But following an international outcry, Correa pardoned the journalists at the last minute.

Meanwhile, the Communications Law passed last June has a clause that prohibits media from criticizing or championing electoral candidates, a ban viewed as undemocratic by many media experts.

The law also set up the Superintendency and defined its role of “monitoring, auditing, intervention and control” of media content, as well as sanctioning transgressors.

“It has been apparent for some time that Ecuador's new communications law was designed to muzzle journalists critical of the administration,” Carlos Lauria, the CPJ’s Americas head, said in a statement.

“That this has been extended to cartoonists is ridiculous.”