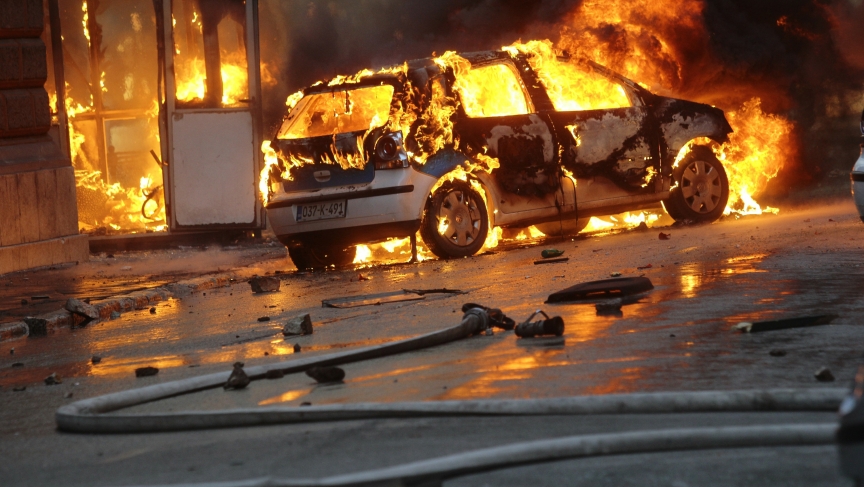 A car burns as anti-government protesters clash with police in Sarajevo.

The troubled Balkan nation of Bosnia-Hercegovina has been wracked by civil unrest for the past week. Nearly 20 years after the end of the civil war in 1995, the nation faces massive unemployment and endemic government corruption.

"Everything started [in Tuzla] last Wednesday," says Elvira Jukic, a reporter with the online news provider Balkan Insight in the capital, Sarajevo. That was when newly laid-off workers took to the streets.

The workers had been employees of recently privatized state industries. The new owners stripped the companies of their assets and closed them, letting the workers go. "They were ripped off," says Jukic.

The unrest quickly spread as people began protesting. The aggravation peaked on Friday, when protesters clashed with police and government buildings were set on fire.

"I was there myself the whole time," says Jukic. "People are angry. When I talk with people in the streets — protesters — everybody said we have had enough. People are sick of corruption and the nepotism required to simply get a job. Politicians are seen as incompetent."

Jukic says the anger has accumulated for years. After the war ended in 1995, there was a period of reconstruction, when people worked together to re-build their homes and cities. But Jukic says most Bosnians have never been able to regain what she calls "the elements of a normal life." She says people want their "rights:" jobs, healthcare and education.