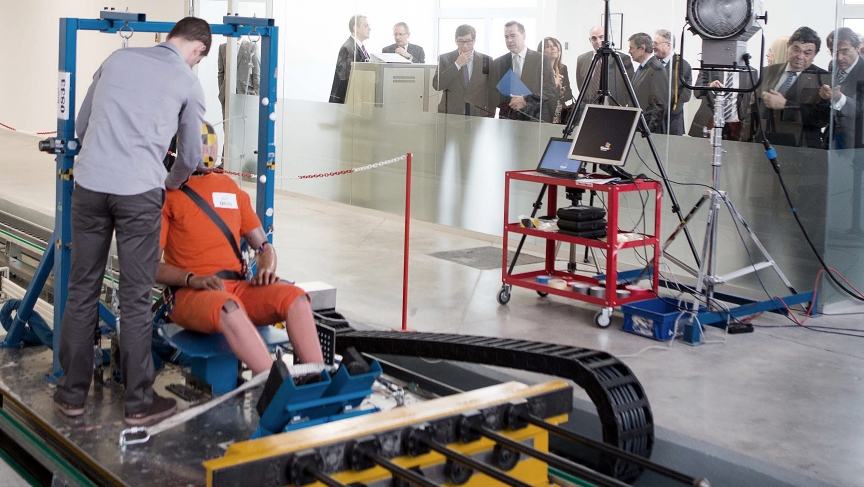 European cars are known to be quite safe, but Spain is beginning a new strategy to reduce auto fatalities even more.

In a warehouse on an arid plateau in Albañiz, in the country’s northeast, a group of engineers operate what amounts to a giant slingshot. When released, a car simulator catapults forward and then stops abruptly, like someone’s stomped on the brakes.

These "crashes" are part of a battery of tests on a new infant car seat, occurring at a public research center called TESSA. Strapped into the simulator is an infant dummy. Lead engineer Francisco Lopez-Valdez says the world owes crash test dummies a lot.

"They’re amazing instruments," he said. "There are 4 or 5 sensors embedded in each one. They let us measure 150 different values, every tenth of a millisecond … including force, resistance, deceleration, skeletal movement."

And yet, he said, researchers know dummies don’t perfectly simulate humans. There are various models, he said, "but all they do is change the dummy’s size. They don’t take into account the protection that extra fat or muscle might give a real person. Or the difference in bone strength between men and women, especially for women over 50 who tend to develop osteoporosis."

Or, take kids, he said. Their tissue is still developing and more prone to internal injuries.

So while he will learn a lot from today’s infant dummy, soon, he said, his data will vastly improve.

To explain, he takes me into a brightly lit room, right next to the test track. It’s TESSA’s brand new morgue, complete with freezers where they’ll soon be storing human cadavers, donated to science.

So what will using cadavers bring to car safety? Mainly, they will show whether a new safety product — say a seat belt or car seat — will protect you from soft tissue injuries.   Lopez-Valdez knows this from experience. He worked at a similar lab in Virginia and says his research there saved lives.

"We were testing a new safety belt once, and with the dummies we got incredible results," he said. "But when we did the follow-up tests with cadavers, we realized that there was a dangerous flaw in the design. The belt protected the thorax, but not the pelvis. You couldn’t see this with the dummies, since, obviously, they don’t have working parts in those areas."

As a result, Lopez-Valdez says, the manufacturer fixed the flaw before going to market.

Albert King is a distinguished professor of bio-medical engineering at Wayne State University in Detroit, where testing with cadavers all began in 1939. King agreed that cadaver testing has saved countless lives.

That's in part because of certain technical challenges. For example, cadavers can’t hold themselves up.

"We try to prop it up. Even using masking tape is a good thing, to hold the head up. Because you can hold it up long enough for the crash to start, and when the crash starts, the tape just breaks [so] it hardly affects the subsequent motion of the body," King said.

King said the US has led Europe on safety tests with cadavers, partly because of red tape within Europe. But the European Union has just approved new guidelines.

Lopez-Valdez isn't worried about getting cadavers for the tests, since Spain has the highest organ donation rate in the world.

"Just yesterday someone called who’d lost a family member in a road accident," he said. "This person wants to donate his own body to prevent further tragedies. Then there’s a retired government official who worked in road safety his whole life. He said he wants this to be the natural, logical finale to his career."

Both Lopez-Valdez and Dr. King stress that researchers treat cadavers with respect. And the bodies remain anonymous. The biggest challenge is getting child cadavers to test seats like the one currently being tested at TESSA. Parents, they say, are understandably reluctant to donate an infant’s body for this research.