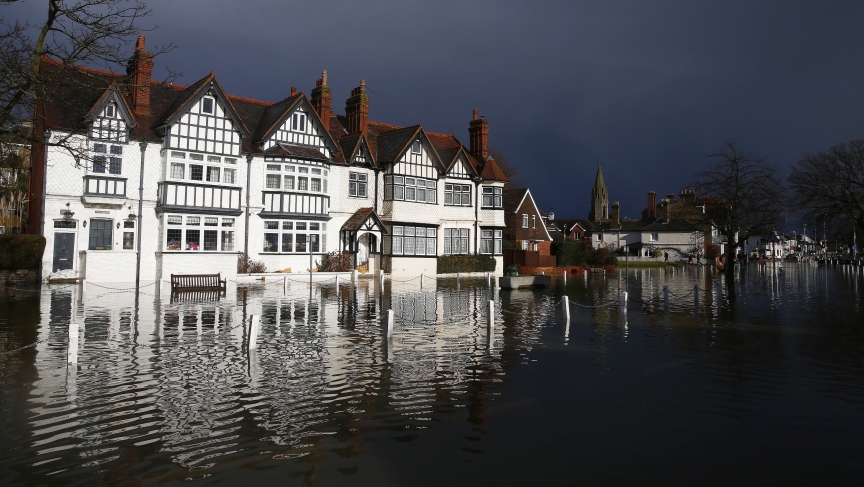 The river Thames floods the village of Datchet, southern England, February 10, 2014. The British Government's top climate science agency says this winter's unrelenting rain is likely due, at least in part, to climate change.

It's raining in Britain. Big news, right? Actually, it is.

Even among Brits long used to wet and dreary winters, the rain this winter is off the charts. The UK just suffered through its wettest January on record. The rain has continued into February, and forecasters say there's no end in sight.

The deluge has brought severe flooding to parts of southern England and widespread finger-pointing about bungled flood management.

And now it's brought something else: a warning from the country's top climate scientist that climate change is likely to deliver more such nasty weather.

That’s a shift in view from just a month ago.

When Prime Minister David Cameron speculated in early January that climate change was probably playing a role in what already seemed an unusual string of winter storms, his government's own climate science agency, the Met Office, wasn't ready to back him up.

At the time, the Met Office said tying the rains and floods to climate change was "a research project which hasn't been done."

Now, a month later, some of that research is starting to come in and the Met Office suggests Cameron was right.

The agency’s chief scientist, Dame Julia Slingo, says scientists are beginning to detect an increase in intensity of daily and hourly rainfall rates over the UK. “And there are now some studies emerging that suggest that storminess is increasing, if we look at the long-term trends over the last century or so,” Slingo adds.

Taken by themselves, Slingo says, there's been nothing unusual about any of the individual storms that have struck the UK this winter. Rather, their "clustering and persistence" have been extremely unusual.

In other words, one or even a few of these storms would be perfectly ordinary for Britain, but one after another after another is pretty much unprecedented.

Slingo says there's been nothing like it since the British began keeping records in the 1760s, almost 250 years ago.

The rains have flooded more than 5,000 homes and cut off rail links to much of the country's southwest. Now, there's concern about rising waters heading east along the Thames River toward London.

The flooding has brought a wave of recrimination against government agencies for not responding better to the crisis or being better prepared in the first place. Prime Minister Cameron has had to assure Britons that his government is on top of the situation.

“Whether it is helping people get out of their homes, whether it’s protecting essential infrastructure, whether it’s the case yesterday of moving cattle off the land,” Cameron said recently, “we'll  do everything we can to help coordinate what’s still a very difficult situation.”

Of course, Britain isn't alone in facing a barrage of unusual weather this winter. The Met Office says there's almost certainly a connection between the waves of arctic cold blasting much of the United States and the waves of storms hitting the UK.

The agency says both are linked to unusual disruptions in the jet stream over the Pacific and North America, which some scientists in turn have linked to warming in the Arctic.

In another acknowledgement that more flooding almost certainly lies ahead, Britain is now seeking advice on flood control from the Netherlands and the US, two countries that have faced their own challenges with high water.