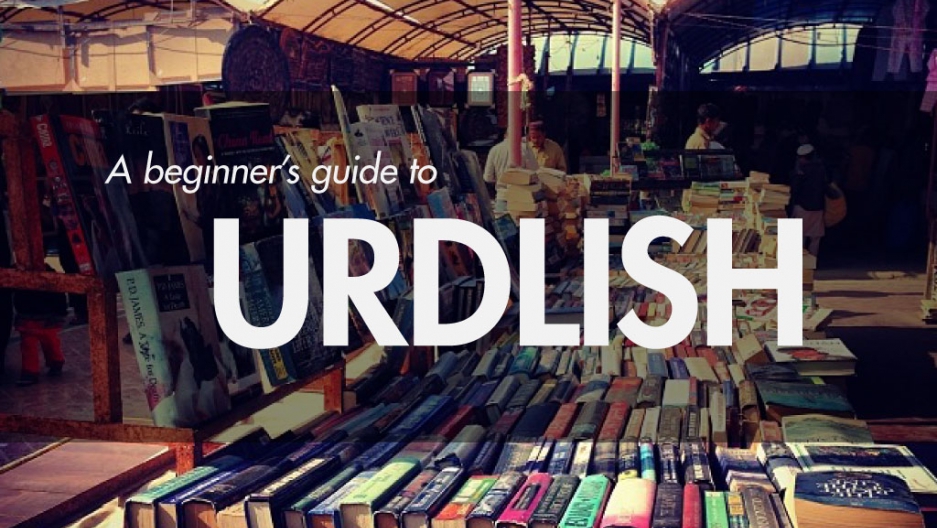 KARACHI, Pakistan — Since 1608, when England first set up the British East India Company, Pakistanis have been appropriating English. By the time Pakistan became a country in 1947, it was declared one of the country's two official tongues.

Since then, we've gotten pretty creative with the Queen’s English.

In Karachi, some of the most commonly used English words, thrown into Urdu sentences, bear very little resemblance to their Western meanings. My favorite is the use of English words in far more literal ways than any native speaker would think of (see "VIP movement").

Here’s a partial glossary of the most common "Urdlish" turns of phrase:

listen to ‘'Cheap'’ on Audioboo

An insult directed toward someone acting inappropriately. Likely developed this meaning from the common belief that people of low socioeconomic levels are more likely to behave in a crass manner. Often directed at men who are hitting on uninterested women to let them know their behavior is unwanted. For example: "Stop that; you're being really cheap right now."

A homemade hand grenade, usually contained inside a small plastic bottle and hurled into a storefront. Not usually lethal, although can cause damage and injuries. The recipe for the explosive is similar to that of a cherry-bomb firework, which is likely where this phrase gets its roots. Also used by speakers of Pashto, Sindhi and Punjabi.

A Victorian-sounding phrase meant to describe sexual harassment in public. Used by telecasters and newspapers to indicate that a person was cat-called, harassed, or groped on the street. For example: "I don't want to go into old town wearing this because of the eve teasing."

listen to ‘'Lift'’ on Audioboo

A synonym for attention, most often used when someone isn't giving it. For example: "I saw Aisha at the mall last night and she gave me no lift."

A more polite name for diarrhea. I don't think I need to explain why or how this phrase became popular, but let's just say I hear it at least three times a week.

Everywhere else in the world, as far as I know, this word means the meat of an older sheep. In Pakistan, however, you'll be disappointed when instead of tender, flaky sheep flesh you wind up with gamey goat.

The extremely painful-sounding way to describe a stud in the nostril instead of the more common ring.

listen to ‘'Prepone'’ on Audioboo

The antonym to postpone, non-existent everywhere else in the world. Used when you have to move a meeting earlier because there's going to be a strike or political riot on the day it was originally scheduled for. Example: "We're going to have to prepone this coffee date because X political party is calling for a no-wheels strike."

A synonym for "pressure," typically used to describe a situation in which the speaker was emotionally blackmailed or guilt-tripped into doing something they’d rather not. For example: "I was pressurized to wear this super ugly necklace at my wedding."

listen to ‘'Rush'’ on Audioboo

Used to describe an unexpected, giant group of people in a public space or an especially chatoic crowd. For example: "I hate the rush at Sunday Bazaar."

listen to ‘'A setting'’ on Audioboo

The goal or successful result of being "set up with" someone for an orchestrated meeting of the hearts. For example: “Can you do my setting with your really pretty friend?”

listen to ‘'Tight'’ on Audioboo

Usually used in an Urdu sentence, the word "tight" is a synonym for "hot" or "sexy," often used by men who are hitting on women. For example: “You're looking very tight today.” It isn't something the recipient of the compliment appreciates.

listen to ‘'VIP Movement'’ on Audioboo

The phenomenon of streets having been cordoned off so that some mid-level politician and his security entourage can move through without competing for road space. Pakistan's understaffed, underpaid and undertrained police force consistenty makes use of its resources to get important people from point A to point B. The phrase is typically used to explain lateness. For example: "Dude, I'm so sorry that I'm late. There was a VIP movement on the main road." Also used by speakers of Pashto, Sindhi and Punjabi.

More from GlobalPost: A beginner's guide to Franglais