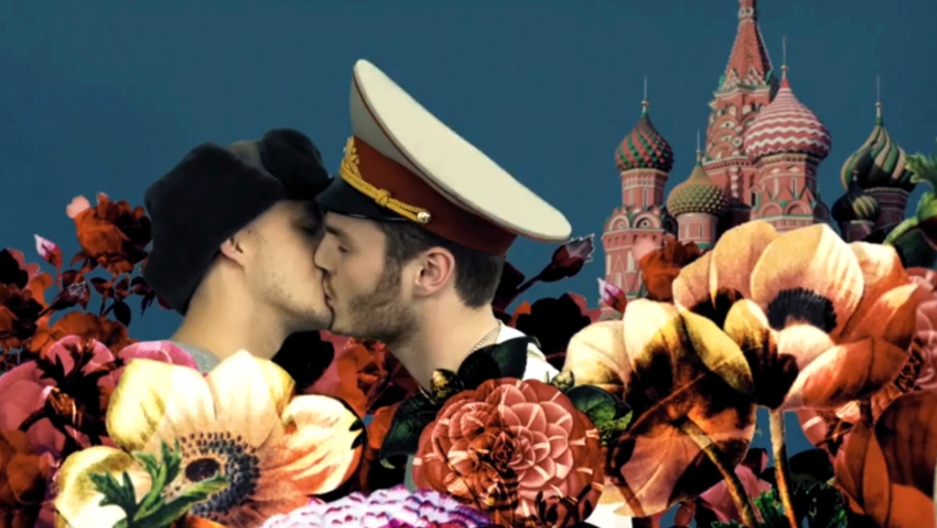 There's a growing global movement against Russia's anti-gay "propaganda" ban, passed last summer to suppress LGBT activism before the Sochi 2014 Winter Olympics. Instead, the law's had the opposite effect, galvinizing pro-gay support at home and abroad.

Other activists are going old school with protest songs denouncing Russia's escalating homophobia and demonstrating solidarity with the country's LGBT community. Some of the songs are dancey and subversive; others are quiet and deeply moving. All stick it to Vladimir.

We’ve done a roundup and here are some of the best:

Gay Men’s Chorus of Los Angeles, "We Shall Overcome"

This song was performed live on Russian TV in Moscow in 1999 with Russian singer Alla Pugachova. It was one of the largest gatherings of LGBT people in Russian history. The GMCLA released the video again this January — 15 years later — to commemorate the struggle for gay rights in Russia. Can you make it past 0:27 without crying? Not me.

This song by London-based indie rock group Autoheart is about the "daft optimism of being in love." The video portrays two Russian soldiers kissing — a public expression of homosexuality that would actually get them arrested under Russia's anti-gay law.

This song "explores the destructive nature of homophobia" while somehow also being a vibrant dance track. The music video features the Ottawa-based musician as a bruised and bleeding gay man describing the physical and emotional violence of discrimination.

The Philadelphia/NYC-based synthpop group pulls a Dan Savage and redefines "Sochi" to mean: n. A delightful anus; v. To do butt sex. The goal is to "infiltrate internationally sanctioned homophobia by redefining the very site of the 2014 Olympics." You may want to close your office door for this one.

The Fugitives, "New Year's in Sochi"

The Canadian folk group's video narrates the story of Dmitry Isakov through signs held by Vancouver residents. Isakov was one of the first people convicted under Russia's anti-gay law for holding a sign saying: Being Gay and Loving Gays Is Normal. Beating Gays and Killing Gays Is Criminal.

There's one way to describe this song by Grammy-winning artist, Melissa Etheridge: ridiculously powerful. (Her vocal cords actually explode at 3:22.) The singer has been openly lesbian since 1993 and is donating part of the song's proceeds to support "the safety and dignity" of LGBT Russians.

Davey Wavey / Short, Back & Sides, "I Can Sing A Rainbow"

[Harvey Fierstein and many others], "Russian Broadway Shut Down"

Babsi, "We Are Everywhere"

The London-based German singer's poppy anthem was inspired by — and includes footage of — an interview of Stephen Fry at Gay Pride in Glasgow. The Emmy-winning actor and comedian calls on Sochi Olympic athletes to make a covert solidarity gesture as they receive their medals. Fry says, "It's becoming a really, really grim time to be gay in Russia, it's horrifying what's happening there. And we want to show them that we are thinking of them."

Canada's Lean and Mean Productions satirize Russian homophobia as well as the national obsession with ballet. The Bilerico Project notes, "It's a humorous little number that highlights some of the many ways in which the Olympics, and Russian society in general, are actually pretty gay."