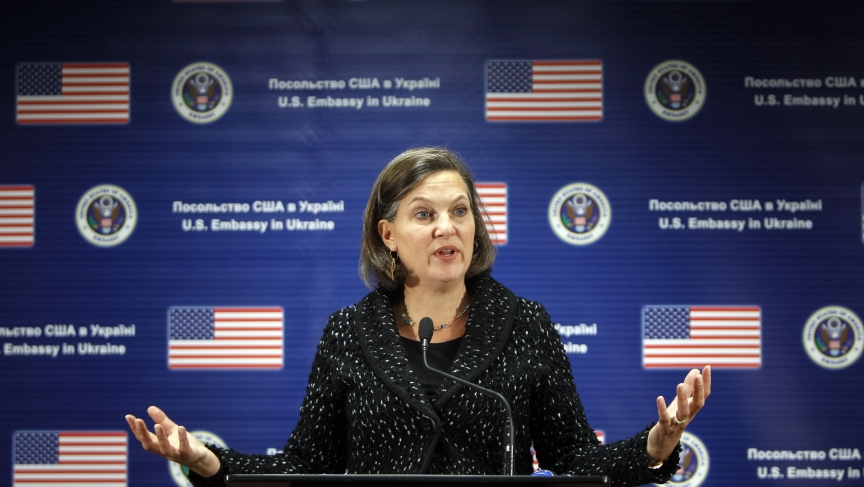 US Assistant Secretary of State Victoria Nuland addresses a news conference at the American embassy in Kiev, Ukraine, on February 7, 2014.

International diplomats admit to having "frank discussions" all the time. These are necessary elements of the art of diplomacy. But they're not supposed to show up on YouTube.

The four-minute chat between two American diplomats about the political crisis Ukraine, presumably meant to be a private one, highlights the political standoff between Washington and Moscow over the former Soviet republic. In addition, some rather undiplomatic language from a top American diplomat on the audio recording has ruffled feathers in Europe.

Assistant Secretary of State Victoria Nuland used a common expletive to express her frustration with the European Union over the best path forward for the West in Ukraine, which has seen sustained mass demonstrations against the government since November. The US has threatened to impose economic sanctions against the Ukranian government. That would certainly anger the Russians, who support Ukraine's current president. The EU has also been hesitant to get on board with the idea of sanctions.

Nuland was in the Ukrainian capital of Kiev today. She refused to comment on the authenticity of the recording, and said she would not talk about "a private diplomatic conversation." She also described the leak as "pretty impressive tradecraft. [The] audio quality was very good."

The White House has all but blamed Moscow for the leak. "Since the [YouTube] video was first noted and tweeted out by the Russian government," said spokesman Jay Carney, "I think it says something about Russia's role."

The phone conversation between Nuland and US Ambassador to Ukraine Geoffrey Pyatt included discussion of specific Ukrainian opposition figures.

A longtime former diplomat at the State Department said the Obama administration is probably correct in its assertion that Russia was responsible for leaking the recording in order to try to embarrass the US. "The Russians want to present a picture of American intervention in Ukraine's affairs," said Nicholas Burns of Harvard University's Kennedy School of Government.

"It's not true," Burns said. "The United States is just trying to help the millions of Ukranians who don't want to have to live as a vassal state to Russia, under Russia's shadow."

Burns said the Obama administration is hoping that some of the more reform-minded opposition leaders join the government in Ukraine, and eventually help bring the country into "an integrated future with the peoples of Europe."

The American frustration with the European Union, Burns said, is largely about the nature of the EU's capacity to implement its foreign policy. "While the United States wants to move out quickly and decisively, sometimes Europe takes a while to get itself together," he said.

The Russians have pointed to the leaked phone conversation as proof of America's "crude intervention" in Ukraine's internal affairs. But Burns pushed back firmly against the accusation.

"That is Russian sophistry. It is absolutely untrue. The country that's meddling and intimidating in Ukraine is Russia," he said.

"You have to remember, this was a private conversation between two Americans. Somebody got ahold of that conversation. It certainly wasn't the United States government," he said. "I wouldn't judge Assistant Secretary Nuland harshly at all. They were having a frank conversation. She is the model of an effective diplomat."