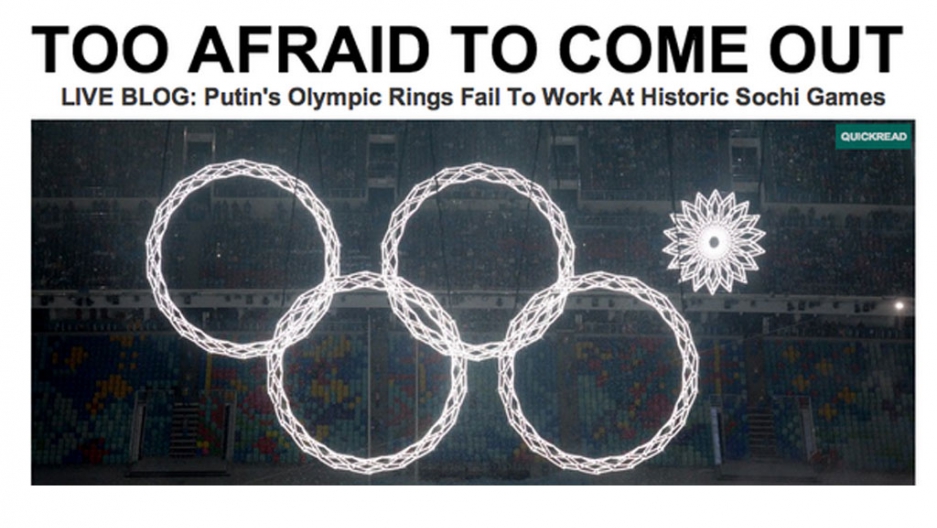 Like when Google basically gave Russia the subversive middle-finger with this Google Doodle.

And out US Olympic skater Johnny Weir followed (pink) suit.

Johnny Weir is a walking middle finger on the streets of Sochi today. An American hero. pic.twitter.com/x43zbneCb0

Or when the Guardian's Moscow Correspondent wanted to point this out.

The @guardian has a rainbow G on our homepage today. Also rainbow seats here at Sochi stadium. Nothing gay, honest. pic.twitter.com/WT5bxuPV2Z

Or how the official Olympics uniform was equally as colorful.

Anyone else see the irony in the official Sochi Olympics uniform and Russia's controversial anti-gay legislation?? pic.twitter.com/IjmiUjuQoP

With matching gloves, of course.

For all the concern in Russia about LGBT rights, these official #Sochi gloves look an awful lot like rainbow flags. pic.twitter.com/tzKtrESDRe

Germany totally got the memo too.

And Dutch snowboarder Cheryl Maas, one of the six openly gay athletes competing, flashed her rainbow unicorn glove to the camera.

Here they are! Men in uniform, a Queen song, rainbow seats, and Tatu to come. #gaypropaganda pic.twitter.com/g8MDq6wgoH

And when an editor wrote this genius headline during a ceremony blip.