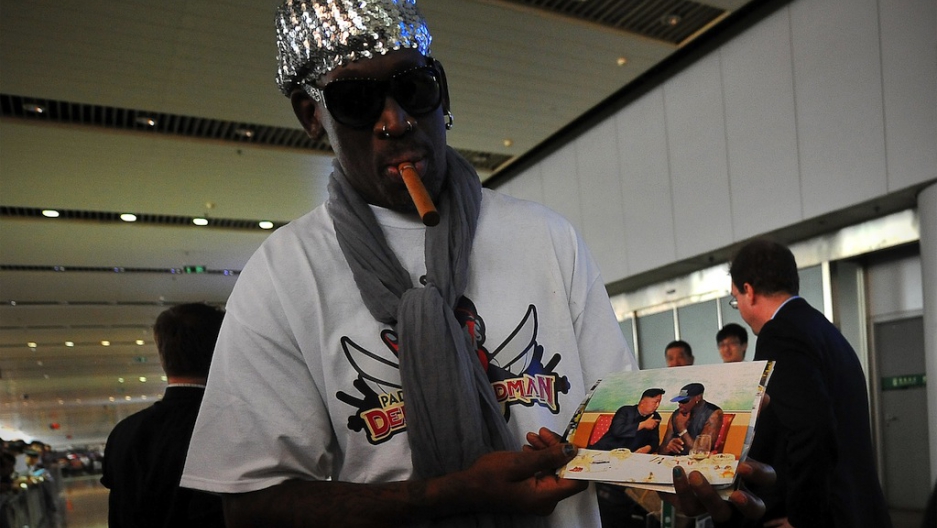 It also stirred conversation among North Korea watchers. They asked, can Western executives and athletes quietly nudge this “hermit kingdom” toward reform? Or do foreigners merely enrich a government that runs a vast system of political prison camps?

North Korea expert BR Myers, a professor at South Korea’s Dongseo University, recently raised the debate’s temperature in an essay about “engagers” — the growing population of outsiders who travel or work in North Korea with the regime’s approval.

Myers says they are aiding the ruling elite.

By contrast, in an interview with GlobalPost, he says Dennis Rodman can head back to North Korea whenever he wants, because his visits are only hurting the regime.

He compares North Korea’s engagers to foreigners who attended the 1936 Berlin Olympics, and left with the view that the Third Reich “had been cruelly maligned.”

On tourism, he writes:

“People in Pyongyang and Wonsan have been watching buses disgorge respectful Europeans and Americans for years now. The regime spins these visits as pilgrimages, and the locals are invested enough in the national life-lie to believe it.”

North Korea, he argues, is a nation that rests on the belief in racial purity, making it more akin to Nazi Germany than any communist state.

Is that really the case?

We followed up on the controversy, speaking with the iconoclast about this and other thorny topics.

GlobalPost: For our readers, can you first lay out what you mean by "engagers," with examples?

BR Myers: I chose the word to refer to people engaged in non-diplomatic but Pyongyang-approved work inside or with North Korea. I initially wanted to talk of collaborators, but that word implies blanket moral criticism, and therefore seems inapplicable to people doing humanitarian work in the true sense of the word.

I must emphasize that my point in writing of “subverted engagement” was primarily a political or cultural one, not a moral one. I feel we need to realize that these contacts do more to improve North Korea’s image overseas than to improve the West’s image inside North Korea.

The [Associated Press’s] presence in Pyongyang is a good example, I think. Its staff is too afraid of losing access even to test the limits of what can be said, so the regime gets the image benefit of hosting foreign reporters without having to worry about negative consequences. Whether those contacts are moral or immoral is a much more difficult question to answer in a generalizing manner.

You often write that the North Korean regime is a product of racial purity and race-based nationalism, derived from Japanese militarism and having characteristics akin to Nazi Germany. How does this shape your view of “engagers?”

I can best explain by talking of that other race-obsessed nuclear state, the apartheid South Africa of the 1970s and 1980s. The West knew it could raise living standards there, and even save lives, by increasing trade with it. It chose to push for an ever tighter boycott instead, with the support of the country's black majority.

I was in an all-white high school in South Africa at the time, and it's funny: I don’t remember foreigners advocating more engagement with the white elite. I saw no busloads of American college kids bowing at the Voortrekker Monument. If you broke the boycott, you were reviled, as Freddie Mercury found out. And no one said, “The boycott hasn’t worked yet, ergo it never will.”

They knew it would take time.

A different logic is now applied to North Korea. It’s not because outsiders believe its human rights record is any better, but because they misperceive it as a failed communist state. They think that more business will mean economic reform, which will in turn lead to a political thaw as well, as happened in the East Bloc.

But this is not a communist state. Like apartheid South Africa, its legitimacy is not linked to a certain economic system. It derives from the claim to superior might, race-purity and resolve. This means you can help improve and modernize its economy, raise citizens’ living standards and so on, without impinging on the regime’s perceived right to rule. Which is of course precisely why these engagers are allowed to do their thing!

Whatever cognitive dissonance they might instill in this or that citizen’s mind is offset by the financial boost to the system as a whole, and by the benefits to North Korea’s image overseas.

For the past decade, quite a few scholars have documented the North Korean system of total control wearing down after the famine of the 1990s, with the spread of black markets and refugees near the Chinese border. Surely there is a way reaching out to regular North Koreans without benefiting the government, no?

The North Korean people are being gradually subverted by the influx of South Korean and other material from over the Yalu and Tumen rivers [two rivers near North Korea’s borders with China and Russia]. South Korean intelligence is getting more and more accurate with its reports, as we saw after the Jang Song Thaek purge [the purge of Kim Jong Un’s uncle in late 2013], which shows that at least some people quite high up are turning on the state at last.

This is as much as can be hoped for under the present circumstances. Any effort to propagandize North Koreans into pro-Westernism is likely to backfire, and if it succeeds, we bear the responsibility for bringing individual citizens into moral and political conflict with their society. The USA has done that sort of thing all too often in the past, only to leave rebels in the lurch when they rise up. As for engagers trying to change one mind at a time: North Koreans in regular contact with outsiders are under special scrutiny, and thus special pressure to prove their loyalty by over-conforming. They are the people least likely to pass on good “word of mouth” about the West.

Why don't you believe the Dennis Rodman trips will lead to a "Pyongyang spring," despite commentators making comparisons to China's "ping pong diplomacy” in the 1970s?

The shared will for an improvement of Sino-American relations led to those ping pong matches and not vice versa. North Korea has as yet no desire for a significant improvement of relations, and no wonder; if it makes friends with the race enemy, it loses all reason to exist as a separate Korea.

This Buzzfeed article explains how fixers helped Rodman travel to North Korea. What do you think about the efforts of Western fixers like these?

I believe Kim Jong Un did his domestic image great harm by meeting so often with a foreigner who to North Koreans looks disreputable, unimportant and irreverent. So as far as I’m concerned, the fixers can take Rodman back to Pyongyang as often as they want!

What bothers me is some of the Western coverage of these and other engagers. Their success in maintaining access is written about as if it were the result of special cultural sensibility, or of an ability to cut through mere political differences and get things done. That sort of talk distorts not just the moral issues involved, but also the hard realities and logistics of doing business in such a corrupt and fear-ridden environment. The result is that North Korea comes off looking better than it should.

Former State Department negotiator Joel Wit responded to your article [in the comments section] saying that engagers aren't very influential in US government circles, but that Washington should deploy the "full range of tools" to deal with North Korea. What's your response?

I never said that engagers can waltz into the Oval Office at will. My point is that they have much more influence in Washington than their North Korean counterparts have in Pyongyang, and surely even Wit will not deny that. If engagement is a tool, it's being used on us.

I see a clear effect on academia too. Research of North Korea’s literature tends to be more critical, less diplomatic, than research of its agricultural practices, for example.

Because the literature researcher can find the books outside the country, while the agriculture researcher needs to get back into North Korea. I hear Sinology is getting compromised by this sort of thing too, but not nearly to the same extent. I’m grateful for all research of course. But we need to be more conscious of what is going on. North Korea now has too big a role in promoting and grooming the people that we look to for North Korea expertise.

Intellectuals like Noam Chomsky and Wilfred Burchett continue to be criticized for their writings on Pol Pot's Khmer Rouge, which were skeptical of refugee accounts and painted the regime in a friendlier light. Will history look back on North Korea "engagers" in a similar way, in your opinion?

I’m glad you asked the question that way, because we must always keep in mind that Kim Jong Un is no Pol Pot. North Korea is a bad place, sure, but nowhere near as bad as the Khmer Rouge’s Cambodia. And even the most wide-eyed engagers refrain from praising North Korea the way the “useful idiots” of old praised this or that dictatorship.

So we need to keep a sense of perspective. I feel confident that many North Koreans will someday express gratitude for the humanitarian aid they received from at least some members of the engager community. Those engaged in outright collaboration for financial gain will probably not be remembered so fondly — especially if the North Korean regime keeps records as detailed as the East Germans did.