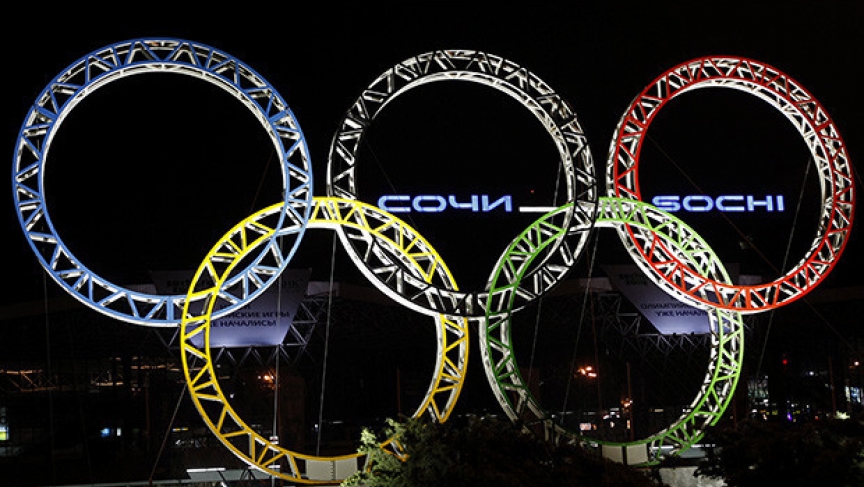 The Olympic rings in front of the Sochi airport

We'll be hearing a lot from Russia over the next two weeks with the Winter Olympics in Sochi.

We'll also be hearing a lot of Russian words and names, some of which are not easy to pronounce. That includes the name of the Olympic host city itself.

We asked Martha Figueroa-Clark for some help. She thinks about this stuff all the time, as part of the BBC Pronunciation Unit.

So, how exactly do you say Sochi?

"Sochi, the venue for the Winter Olympics, is usually anglicised as SOTCH-i (-o as in not, -tch as in catch, -i as the 'y' in happy) by English and Russian speakers alike — and this is the pronunciation we recommend to broadcasters. However, the Russian pronunciation of -o in Sochi is somewhere in between the English "law" vowel and the English 'lot' vowel (so somewhere between SAW-chi and SOTCH-i)," she said.

"When forming recommendations, our approach is to reflect the native pronunciation as closely as possible while bearing in mind practical considerations. Our pronunciation advice is anglicised for ease of pronunciation by English-speaking broadcasters and to ensure that names can be discerned by BBC audiences," she added.

Some other Olympic venues in Sochi have interesting and challenging names for English speakers, so here are a few more pronunciations from the BBC Pronunciation Unit.

One of the skiing venues is Krasnaya Polyana, pronounced KRASS-nuh-yuh puh-LYAA-nuh (-uh as "a" in sofa, -ly as in million). Historically, the word krasnaya (feminine form) or krasny (masculine form) meant "beautiful." Nowadays, it means "red." Polyana means glade or clearing.

Turning to the Bolshoi Ice Dome, the word Bolshoi (big) is often anglicised as BOL-shoy (-ol as in olive, -oy as in boy), as in Moscow's Bolshoi Theatre. In Russian, it's closer to buhl-SHOY (note final syllable stress), although there is a palatalised 'l' in Russian that has no equivalent in English. It's similar to what you would hear when the word "lucrative" is pronounced as LYOO-kruh-tiv (-ly as in million) — as opposed to LOO-kruh-tiv (-oo as in boot).

In ice hockey's Shayba arena, "shayba" is pronounced SHIGH-buh (-igh as in high, -uh as "a" in sofa) and means puck.

Another venue, Rosa Khutor, is pronounced ROZ-uh KHOO-tuhr (-o as in not, -uh as "a" in sofa, -kh as in Scottish loch, -oo as in boot, -uhr as "or" in doctor). Khutor means hamlet or farmstead.

And just in case you haven't yet figured out how to pronounce President Vladimir Putin's name, here's a reminder. "In other Slavic languages, the name 'Vladimir' can be stressed on the first or last syllable, but in Russian, the stress falls on the penultimate syllable. 'Putin' is sometimes anglicised as PYOO-tin, perhaps by unconscious association with other English words like 'putative' or 'punitive.' The correct pronunciation, anglicised, is vluh-DEE-meer POO-tin (-ee as in street, -eer as in deer, -oo as in boot)."

If you take in all these suggestions, and manage to pronounce Sochi as well as the names of its many venues correctly and precisely, a Russian speaker might respond with "otlichno!" That's Russian, for excellent. It's pronounced “ah tlee chnah.”

And since we're on the subject of Russian language and customs, I recommend trying Russian borscht. It's also "otlichno."