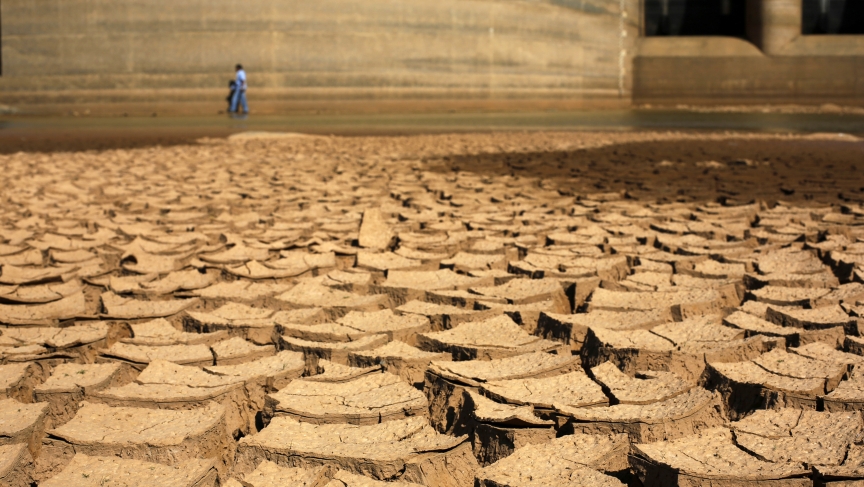 A worker of SABESP, which provides water and sewage services to residential, commercial and industrial areas, walks last month through a dry Jaguary dam as a result of a long drought that hit near Sao Paulo. This has been the hottest January on record in parts of Brazil.

It's been a dry summer in São Paulo — and the situation may soon affect the faucets there.

São Paulo is on the verge of rationing water, GlobalPost reports. A system that provides water to half of the city's residents could be empty in less than two months. The water shortages could last into June and July, when the city hosts the World Cup.

São Paulo's governor said if rains return by Tuesday, rationing should be avoidable in the city itself, though some smaller cities have already had to implement restrictions. Unfortunately, meteorologists expect little rain or relief from the heat in the next week.

In a country that works to isolate its people from any knowledge of the outside world, North Korea’s leaders make one exception. Their sons study at Pyongyang University of Science and Technology — a school largely taught and financed by Westerners.

The goal is to learn just enough to profit from the West.  Only the sons of the elite attend. The guards are all women, there to make sure that student interactions with the Internet and foreigners remain within strict limits. PRI’s The World spoke with BBC reporter Chris Rogers who visited the school and explains why foreigners are willing to support the school, and why North Korean leaders tolerate it.

The Indonesia government takes over the 'Zoo of Death'

The Surabaya zoo in Indonesia is one of the oldest and largest zoos in southeast Asia. But it has also become one of the deadliest.

Recently, an 18-month-old lion was strangled by a cable that keepers used to raise and lower a gate in his cage. A wildebeest was found dead in its cage a few days before the lion's death and a mountain goat died of neck injuries. Beyond the deaths, there have been reports of animals living in overly crowded cages and not getting enough food. The BBC reports that the state government has taken over the zoo, but international zoo officials worry the situation is so bad, it will give all zoos a bad name.

In Argentina, citizens police the prices in supermarkets

Argentina is struggling with inflation, and the government's answer is voluntarily price controls. President Cristina Fernandez is pressuring supermarkets to sell 80 key items at fixed prices. Now, she's calling on the people to monitor supermarket compliance with a handy app created by two college kids.

The Associated Press reports that the app, which was released last week, lets people scan and monitor prices of the 80 items easily — and it has captured the imagination of the Argentinian people. If people find a high price, they can lodge a complaint with the government consumer protection agency through the app. Downloads of the Precios OK (Prices OK) app last week exceeded downloads of Instagram and even the wildly-popular game Candy Crush. Argentinians may like the idea, but some economists think the government is using the supermarket chains as scapegoats for its poor economic policies.

Algae have an appetite for Fukushima radiation

Sometimes small is beautiful. Researchers at Japan's University of Tsukuba have isolated a strain of microalgae that absorbs Cesium, one of the radioactive elements released by the meltdown at the Fukushima nuclear plant in Japan.

In a lab, the researchers have shown the microalgae can absorb 90% of the Cesium from a simulated batch of contaminated water. Of course, the algae become contaminated, but it is easier to filter and dispose of them than the huge volume of contaminated water still flowing from the Fukushima plant. PRI’s The World reports the algae could be a promising option for clean up, if only the Tokyo Electric Power Company that owns the plant would show a little interest.

Quote of day: #Putin “one crazy little czar who chose to throw money right & left in some kind of madness.” #Sochi http://t.co/OPWFwUcGX1

Weather in Sochi, Russia, is expected to be nice for the Olympics — 50s, a little bit of sun, certainly no snow. It's not exactly ideal Winter Olympics weather, but Russian officials have a plan for that, with stored and manufactured snow. But 3200 miles northeast of Sochi, in the Siberian area known as Suhana, the temperature was -73 degrees Farenheit, according to AccuWeather. We don't think that's ideal Winter Olympics weather, either.

What would Putin say? 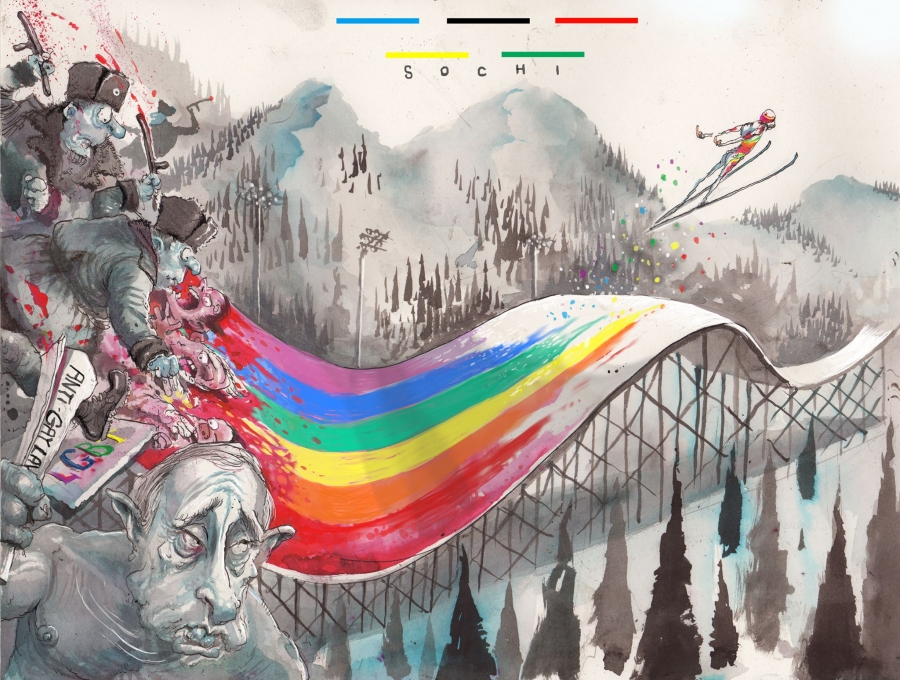 Australian satirist David Rowe makes brilliant use of the gay pride flag in this cartoon marking the start of the Winter Games at Sochi.