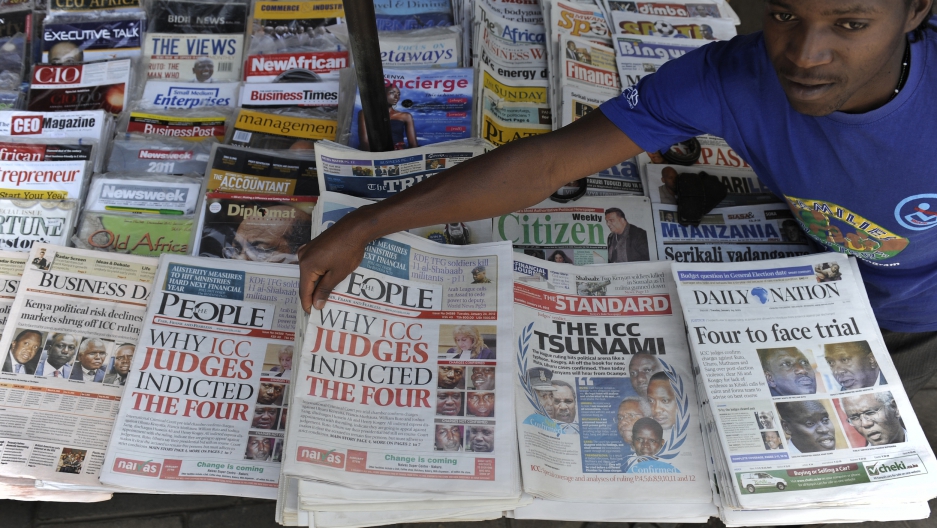 AMSTERDAM — In January 2008, protests over Kenya’s disputed presidential election broke into violence. In the two months that followed, an estimated 1,500 people were killed.

Victims of the conflict have been waiting for justice and compensation for six years now, but the courts in Kenya have prosecuted only a handful of low-level perpetrators. The Kenyan government has handed some victims symbolic amounts of money — between $116 and $4,650 — or simply 2-kilogram tins of maize as reparations for lost loved ones, properties and businesses.

The victims’ remaining hope has lain, for the past several years, in the International Criminal Court in The Hague, after the list of alleged perpetrators compiled by an international group known as the Waki Commission was handed to the ICC in 2009. “There will be no impunity for the crimes that have been committed,” then-Chief Prosecutor Luis Moreno Ocampo declared at the time.

The promise is proving difficult to keep: As the court currently considers whether to pursue its long-postponed trial of current Kenyan President Uhuru Kenyatta, and whether to reprimand the Kenyan government for obstructionism, it’s increasingly clear that the July 2009 unsealing of the envelope containing the names of the main suspects has opened the proverbial Pandora’s box. The five-year-long procedures in the Kenya cases have displayed all the court’s weak points and flaws, including its dependency on state cooperation for evidence collection, difficulties in protecting its witnesses and vulnerability to political pressures.

Kenyatta was openly anti-ICC even prior to his election, announcing, “If Kenyans do vote for [the National Alliance Party], it will mean that Kenyans themselves have questioned the process that has landed us at the ICC.”

Kenyatta’s government has cannily argued both to its own people and neighboring countries that the court is biased against Africans. “The Kenyan government has been very effective using diplomacy,” says Nic Cheeseman, director of the African Studies Centre at the University of Oxford, “sending its ministers and other representatives of African countries to persuade these governments to support Kenya’s campaign against the ICC.”

“They united those African leaders who are not very democratic and are often facing accusations of human rights violations like: Zimbabwe, Ethiopia, Uganda or Sudan,” says George Nyabuga, from the School of Journalism and Mass Communication at the University of Nairobi.

Last September, Kenyan members of parliament approved a motion to withdraw from the Rome Statute that established the ICC.

Kenyatta’s attorneys have also repeatedly submitted motions requesting his excusal from continuous presence at the trial or demanding a permanent stay of proceedings, claiming to have evidence that three witnesses “have been interfering and tampering with the collection of evidence through channels provided by the prosecution.”

Witness interference has been a constant theme in this case. The reason Kenyatta’s trial has been postponed until this month is that in December 2013 the prosecution announced the withdrawal of one of the witnesses. That had disastrous effects on the entire case, forcing prosecutor Fatou Bensouda to ask for a three-month adjournment to seek additional evidence. It’s unclear whether sufficient evidence can be collected, given “the widespread perception that the witnesses have been intimidated and bribed” by the Kenyan government, says University of Warwick political scientist Gabrielle Lynch.

“The scale of witness interference that the office has seen in the Kenya cases has been unprecedented,” the Office of the Prosecution's press office told GlobalPost. “The challenge we face is that the intimidation and interference goes beyond individual witnesses themselves and extends to pressures on their immediate and extended families, relatives and loved ones.”

The Kenyatta trial has thus exposed, to critics, one of the international court’s main structural weaknesses: insufficient resources and methods for protecting witnesses. Oxford's Cheeseman argues that when facing such challenges “it is always likely for the ICC to have a very low success rate.”

Another ICC weak point in this trial has been the court's dependence on state cooperation for evidence collection.

In the status conference held by the Trial Chamber on Feb. 5, the prosecution argued that “pure obstructionism” was hampering their attempts to prosecute. The Kenyan government has not cooperated in allowing access to Kenyatta’s financial records, which the prosecution argues could be crucial for keeping the charges.

“Victims have seen the case increasingly crumbling in front of them,” the University of Nairobi's Naybuga says. Many feel “fatigue, because they do not think that the promises of bringing justice to the victims will be ever fulfilled.”

Fergal Gaynor, the legal representative of the victims in the Kenyatta case, says his clients had hoped for better luck in the international court. “They have very little faith in local courts and believe that judges and prosecutors are easily bribed. This is one of the reasons why they had expected that the ICC would be better able to overcome efforts to interfere with justice than the domestic court could be.”

Gaynor says some of the 300,000 victims in the post-election violence received checks ranging from 10,000 Kenyan shillings ($116) or 400,000 shillings ($4,650). But “the victims do not think that the assistance has been provided in an ethnically neutral fashion.” Rather, they believe it has “favor[ed] those from the Kikuyu or Kalenjin tribe.”

Many victims “watched as their father or brother were beheaded, neighbors being burned to death,” Gaynor says. They “often have very modest requests such as school fees or money for the hospital. Some of them have small businesses like tea shops and ask for little loans, so that they can buy equipment and get back on their feet.”

The Office of the Prosecutor clearly expressed his commitment to justice for the victims of the post-election violence, stating: “The men, women and children who were killed, injured and forcibly displaced from their homes in 2007-2008 must not be forgotten.”

That’s a tall order. At the current stage, “success” might merely mean maintaining the charges against Kenya’s president and finally starting the trial.

Correction: A previous version of this article misspelled George Nyabuga's last name. The article subhead has been edited from an earlier version that misstated the date of post-election violence.