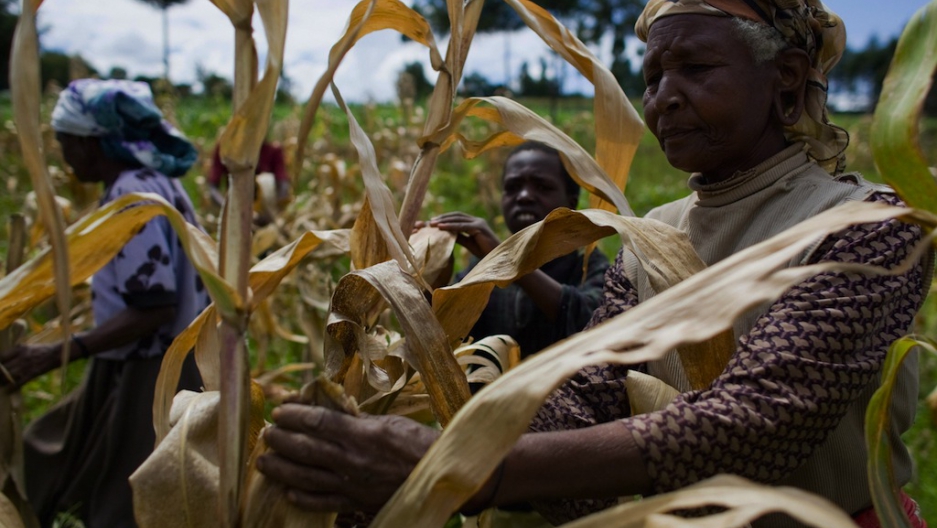 Kenyan farmers pick through their maize crop in a field in the village of Kapsimatwa near the Rift Valley town of Bomet in western Kenya on September 9, 2008.
Credit: YASUYOSHI CHIBA
Share

ADDIS ABABA, Ethiopia — The African Union commemorated the 10-year anniversary of the Maputo Declaration on agricultural development with the launch of the “Year of Agriculture and Food Security” last week at its summit in Addis Ababa.

Around the summit, following discussions of the political and humanitarian crises in South Sudan and the Central African Republic, I heard the talk turn to agriculture. And African governments certainly have a lot to talk about.

Since Maputo, which mandated that African governments commit to spending at least 10 percent of their budgets on agriculture by 2015, 20 nations have pledged to do so under the rubric of the Comprehensive African Agricultural Development Program (CAADP). Agricultural spending has doubled across the continent, a notable achievement that has shown solid results in increased food production and economic growth for those countries that have fully invested in the sector.

But there is a long way to go. According to a new report from the nonprofit ActionAid, most governments are not “walking the talk” – they are failing to live up to their CAADP commitments.

ActionAid found that only seven governments have consistently met the Maputo mandate – Ethiopia, Niger, Mali, Malawi, Burkina Faso, Senegal, and Guinea. The average agricultural budget allocation for the region is just 5 percent. And much of the spending fails to meet the needs of the continent’s overwhelmingly small farms or the female majority who do most of the work.

A significant part of the problem is that women lack equal access to land, credit, and the limited training and support currently provided by governments. According to the United Nations, studies have shown that equal access could boost their yields 25 to 30 percent, and on a global scale, it could raise food output between 2.5 and 4 percent while reducing the number of hungry by 12 to 17 percent.

The ActionAid report also found that most public investment in the seven countries meeting their Maputo commitment goes for the provision of chemical inputs rather than cheaper and more climate-resilient support for agro-ecological farming methods, such as intercropping and crop rotation. These farming methods can boost smallholder productivity while reducing dependence on imported fertilizers and other agro-chemicals. One study cited in the report of nearly 300 different projects found yield increases of 79 percent from sustainable practices.

Unfortunately, the tone at the AU summit sometimes echoed the agribusiness-led New Alliance for Food Security and Nutrition, initiated by the G8 club of wealthy nations in 2012, and less so the voices of African farmers themselves.

The business model for African agriculture comes partly out of necessity. On average, governments have been able to fund only about 20 percent of their CAADP budgets out of revenues. Blame it on weak tax collection. Blame it on foreign debt. Blame it on corruption. But underlying all of those are relatively weak economies with limited access to foreign exchange. As a result, African countries are desperate for foreign investment.

Even some of CAADP’s success stories seem fragile. Malawi has earned wide acclaim for its commitment to growing more of its own food, spending roughly 20 percent of its government budget on agricultural development. Its fertilizer subsidy program flew in the face of World Bank recommendations, but it delivered the food, or at least the maize. Malawi produced so much of the crop that it even exported it, just years after suffering famines over much of the country.

Now the country is facing enormous challenges. Tobacco sales, which accounted for at least half of all export earnings, collapsed in part due to decreased international demand. The foreign exchange crisis led to an International Monetary Fund rescue plan, which came with all the usual stringent conditions. As a result, the currency was floated on the open market, and ceilings were removed from fuel and electricity prices. Those have more than doubled in the last year, raising the prices for nearly everything in this landlocked country.

Of particular concern are food prices. Maize prices doubled, despite a decent harvest last year. This was partly the result of the currency devaluation, even though Malawi does not import maize. The country does import fertilizer, which jumped in price in domestic currencies. Meanwhile, there is less money to spend. A massive corruption scandal involving the diversion of funds in the input subsidy program – known locally as “Cashgate” – has prompted the suspension of international donor support, which accounts for as much as 40 percent of government revenues.

Under such conditions it is easy to understand why Malawi would sign on to the industry-backed New Alliance package last year. But the New Alliance’s priorities are not always consistent with the agricultural development frameworks many countries such as Malawi have devised. They also come with an exacting set of policy conditions related mostly to improving the “investment climate” in the country and opening up good lands to industrial agriculture.

The AU summit ended January 31 with an historic commitment to end hunger on the continent by 2025, as part of UN Secretary General Ban Ki-Moon’s “Zero Hunger Challenge.” To reach that goal, African leaders need to make this the first of many years of agriculture and food security. Small-scale farmers, many of them as hungry for change as they are for food, need investments in their food-producing capacity, and governments – in Africa and in the donor community – need to take the lead to make it happen, not hope for the private sector to lead the way.

Madam Elizabeth, a smallholder farmer and member of the Eastern African Farmers Federation, spoke to delegates on a panel during the summit on the theme, “From Rhetoric to Action: Towards a Transformed Agriculture.” She called on Africa’s leaders to invest in smallholder farmers. “We have the potential to feed the world when we are given the necessary support.”

Timothy A. Wise is the Policy Research Director at Tufts University’s Global Development and Environment Institute (GDAE). He is currently on an Open Society Institute Fellowship researching agriculture, climate change and the right to food through a project called "A Rights-based Approach to the Global Food Crisis."